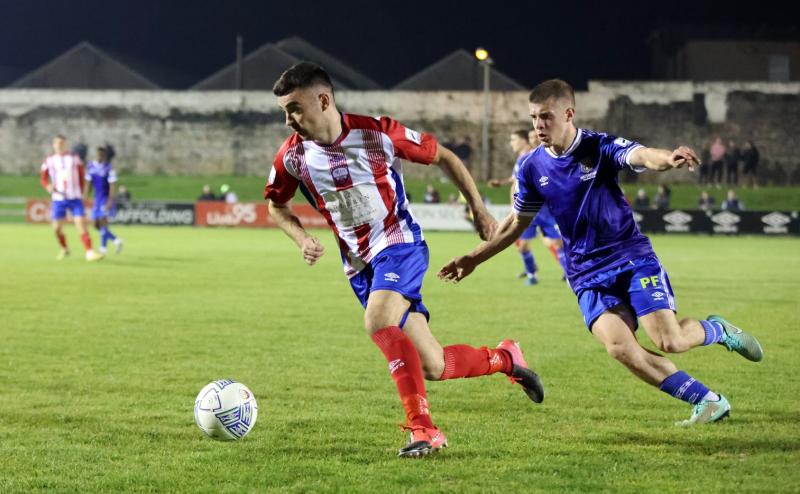 Stephen Christopher on the attack for Treaty Utd in their SSE Airtricity League First Division clash with Waterford FC at the Markets Field on Friday night Pic: Kieran Ryan-Benson

TREATY United eased past Waterford FC 2-1 in the SSE Airtricity League First Division at the Markets Field on Friday night to secure their first home league win of the season.

Tommy Barrett’s side were deserving winners over a Waterford side who finished with 10 players, following the 55th minute dismissal of Tunmise Sobowale.

Waterford made the hosts sweat for a finish, however, when Anthony Wordsworth headed home after 75 minutes.

Following defeats away to Galway and at home to Cork City seven days prior, Treaty now avoid the unwanted record of three consecutive defeats for the first in their brief history.

A first home win of the season is timely, especially after the disappointing 4-0 reverse last weekend at the hands of Cork City.

Barrett had to contend with a virus in the camp this week and was forced into naming a number of young players on the bench – namely Fionn Doherty, Lee Mulready and Scott Kirkland. Short Lee Devitt and Sean Guerins, Barrett called upon Keane and Joe Collins from the start for the first time this season.

It was the players who served him well last season who were involved in the opening goal. Marc Ludden’s low delivery found its way to the back post where Keane was on hand to drill home for the opener.

Despite a reduced home crowd, the home support were vocal an encouraging throughout, as Treaty dug deep for a first home victory since they beat Cobh last Autumn.

The game’s talking point was on 49 minutes, when Tunmise Sobowale went in firmly on Enda Curran and was given a straight red card. There was little debate about the decision, though referee Gavin Colfer had to consult with the linesman before reaching for the red card.

Despite being a man-up, Treaty had to defend and when Wordsworth converted a rebound entering the final 15, it was game on again. United played on the counter attack, with the legs of Willie Armshaw and Joel Coustrain offering plenty in attack.

The duo had openings but were denied by the formidable Brian Murphy.

But the back-four and keeper Jack Brady held firm to secure the precious three points. The result moves Treaty back into the play-off picture, having struggled in their recent outings.