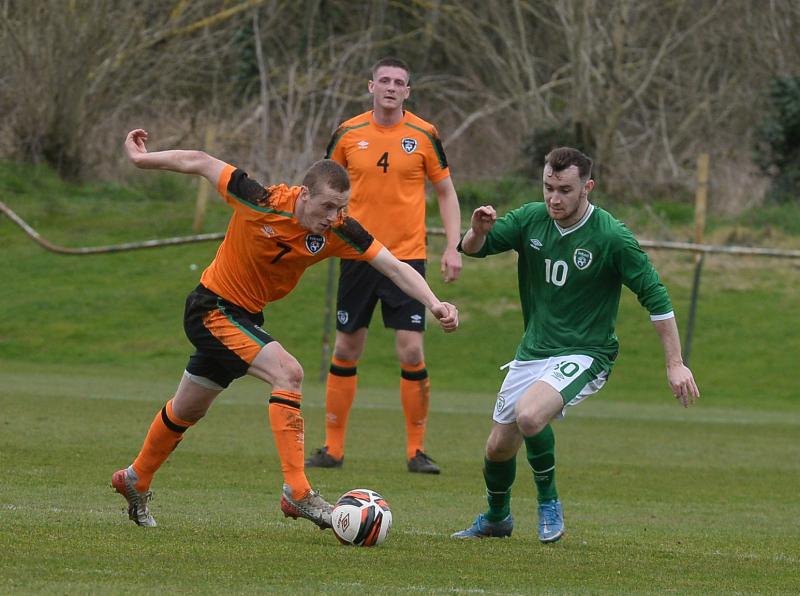 A brace of goals from Rockmount's Nathan Broderick and one from fellow clubman Luke Casey eased Region 1 to a comfortable victory over their Region 2 rivals in Saturday afternoon's UEFA Regions Play-Off Match at the AUL Complex, Clonshaugh.  (Region One 3 Region Two 0)

The winning side, which included AJ O’Connor from Fairview Rangers, earned the right to represent the Football Association of Ireland in the UEFA Regions Cup qualifying campaign which is scheduled to take place in October in Bulgaria where the FAI side will be joined by teams from Romania and San Marino.

Saturday's play-off game is a UEFA competition requirement and the opening period saw both sides struggle to impose themselves with opportunities at a premium in front of goal.

There was little to choose between both sets of players as they grew into the occasion. In front of a decent sized attendance they produced an entertaining 90 minutes of action on a heavy but firm pitch.

The best early chance fell to Jimmy Carr of St Michael's on 15 minutes when he rounded Demer Sterio in the Region 2 goal but Scott Osborne got back to make a brilliant  goal line clearance.

But there was nothing Sterio could do on 36 minutes when Rockmount striker Broderick pivoted on a ball just outside the penalty area to half-volley to the roof of the net for a sweet finish.

The goal helped settle Region 1 who were coached by Ross Carrig on the day and Stephen Chambers in the middle of the park was impressive with his creativity and range of passing. Across the back four Jack McMullan and Adam Crowley were very solid while fullbacks Chris Smith and Glen Daly looked to get forward at every opportunity.

For Region 2,  coached by James Quinn,  Alex Kelly, Scott Osborne and Conor Foley caught the eye but could make little impression on Brendan O'Connell's goal.
Both sides were evenly matched for long periods but  on the restart Region 1 should have added to the scoreline on 47. Broderick tried his luck  from 25 yards in the 47th minute but his effort cannoned back off the upright and away to safety.

Region 1 were not to be denied however and on 52 minutes, after good work by Jimmy Carr down the right flank, the ball was worked to Broderick. His goal bound shot  took a deflection off a defender and  Casey, well positioned, from five yards out stuck out a trailing foot and the ball deflected past Sterio to the back of the net.

Several substitutions from both sides injected some fresh legs and pace into the game and Sam Burgess and Eoin Hayes looked lively on their arrival for Region 1.
The insurance goal came from Broderick in the 74th minute with Casey providing the cross into the box and with Sterio and a couple of defenders converging on the ball, the Rockmount AFC frontman reacted quickest to poke the ball home from close in.

Substitute Liam Brady flashed a shot just wide of the post  for Region 1 while Region 2 did have a late opportunity for a consolation goal when Conor Foley, from an acute angle, got a rasping shot away but skipper O'Connell blocked the ball away for a fruitless corner.

The winning squad will meet for a training session on Saturday with an attractive fixture against Jim Crawford's FAI Under 21s at Whitehall on Tuesday, March 22 next up where there is a 7.30pm kick-off.