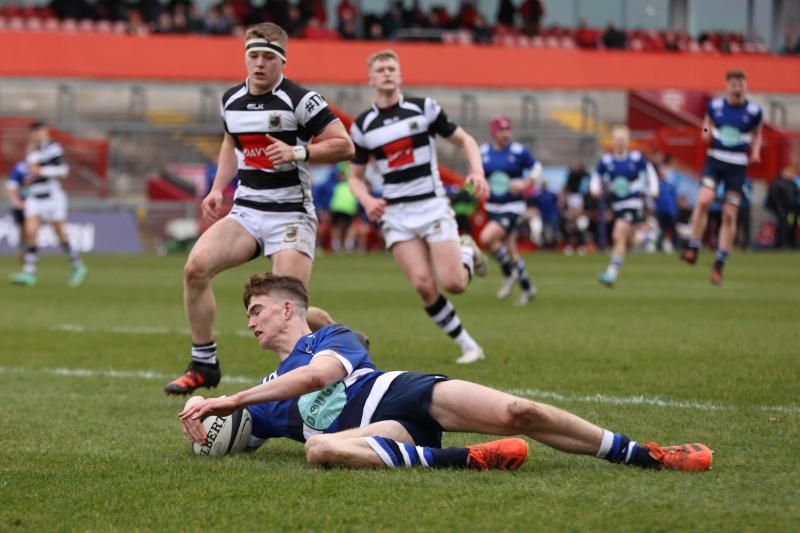 Limerick's Crescent College Comprehensive have won the Pinergy sponsored Munster Senior schools cup final with a 26-5 win over Cork's PBC. The win today at Thomond Park saw the Dooradoyle side go through the entire tournament unbeaten, winning their seven games, including a second win over PBC.

First half tries from Jed O'Dwyer and Brandon Nash, converted by out half Oscar Davey saw the Limerick school 14-0 to the good at the half time whistle.

The second half began with more Crescent pressure as Davey scored his side's third try in the corner following a mix up in the PBC lineout.

PBC responded with a well worked try from Danny Sheahan to close the gap to 19-5. O'Connor, the Cork full back missed the conversion.

The comeback effort did not last long however as Crescent's Max Clein charged down a clearing PBC kick and gathered the ball to see his side into a 24-5 lead. With Davey adding the extras, Crescent Comprehensive were 26-5 to the good after 53 minutes.

The remaining minutes of the game saw Crescent dominate field position as they used their frenetic high pressure defence to seal the win.

Crescent College were appearing in their 17th Munster Schools Senior Cup final. The Limerick side have won the Cup 12 times, their last success coming in 2014 when defeating local rivals Ardscoil Ris.

Crescent College boasted a well-balanced side this year, playing an exciting brand of rugby. Their backline included exciting winger Brandon Nash, brother of Munster senior star Calvin, while the full-back on the side is the highly-regarded Jed O'Dwyer, whose father Anthony holds two Schools Senior Cup medals from his time in the school, part of the 1989 and 1990 back-to-back winning sides.