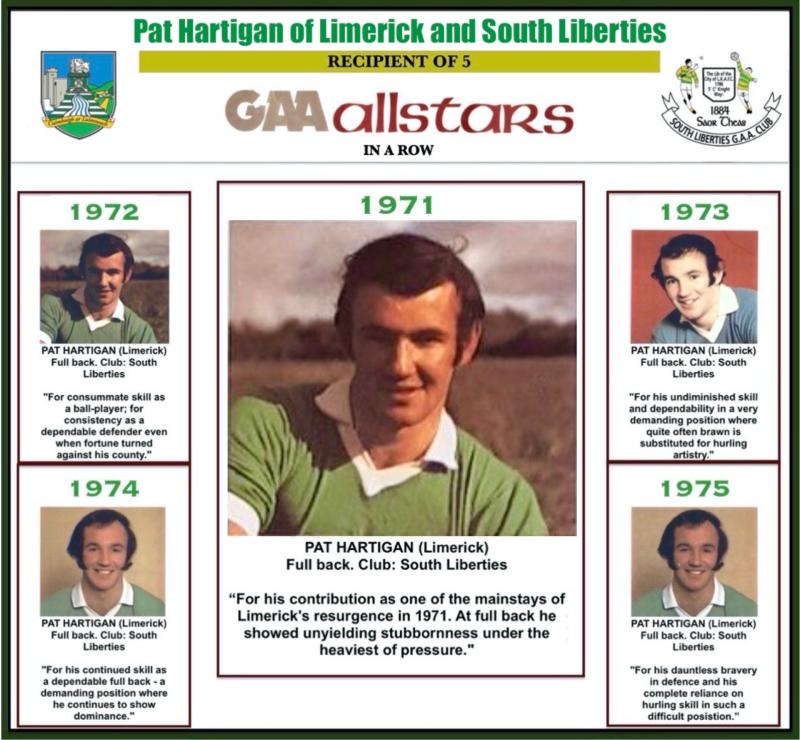 2021 sees the GAA All-Star Awards scheme celebrate its golden jubilee year, having been first introduced in 1971.

Securing the pivotal position of full back on that first ever All-Star hurling team of 50 years ago, was Limerick’s Pat Hartigan.

On that inaugural award winning line-up, Pat Hartigan was joined by fellow Limerick man Eamonn Cregan, who was named at left corner-forward.

Not only was Pat the first ever Limerick man to receive this prestigious accolade, but he would also go on to become the first player in Ireland to acquire five consecutive All-Star awards between 1971 and 1975.

In 1971, the inception of the GAA All-Stars was the brainchild of the late Mick Dunne, initially of the Irish Press Group and later RTE's GAA Correspondent.

This popular journalist and broadcaster led the campaign to launch an official annual award scheme to honour the best 15 hurlers and footballers in the country. Ten GAA correspondents from all the major national press publications, as well as from RTÉ radio and television gathered together to select both All-Star teams in October of that year.

The chosen All-Star teams would later go on tour to play a series of exhibition games against the All-Ireland champions of the same year in various cities throughout the US, with San Francisco a permanent destination every year.

Fifty years ago Pat was informed by the Limerick County Board that a photographer was being sent from Dublin to his home in Drombanna to take his photograph, as he had been nominated for the full back position. However, he didn't realise that he was actually selected on the team until it was officially announced through the national media, some days later.

The rationale for his first award in 1971 read as follows: “For his contribution as one of the mainstays of Limerick's resurgence in 1971. At full back he showed unyielding stubbornness under the heaviest of pressure.”

The awards’ ceremony took place in the Burlington Hotel in December, bestowing great recognition on GAA heroes both at home and abroad.

Pat's second award came in the following year of 1972, complimented by the following citation: “For consummate skill as a ball player, for consistency as a dependable defender even when fortune turned against his county.”

In 1973, Pat Hartigan was awarded his third All-Star, with fellow clubman Eamon Grimes also selected on the team in a never to be forgotten year for Limerick hurling. Pat was unanimously selected the best full back in Ireland by all ten judges.

A fitting end to a year that saw Limerick (captained by his South Liberties club-mate Eamon Grimes) win the Munster and All-Ireland titles after a wait of 18 and 33 years respectively.

In 1974, he won his fourth award, when Nicky Orr (Kilkenny) was the only other full back nominated to challenge for the position. That same year another club-mate Joe McKenna received his first All-Star at right half forward; thus ensuring more awards for the South Liberties and Limerick stalwarts. However, it was his fifth award in 1975 that is the most special to Pat, as his teammates Eamon Grimes and Joe Mc Kenna were also All-Star recipients.

To have three close friends from the club win All-Star awards in the same year is a badge of honour that South Liberties will forever hold with great pride; and it has remained a major source of inspiration for all those who have since donned that famous green and gold jersey in subsequent years.

In January of this year, the Irish Independent Newspaper carried out an in-depth analysis of the 50 years of the All-Star awards scheme and this resulted in them naming the ‘Supreme Hurling All Stars Team’.

Pat Hartigan was chosen at full back, with the article stating: “Five successive awards (1971-’75) set a target that no full back has since managed. Hartigan was an imperious presence in front of goal but there was more to his game than that. His play from the front approach evolved full back strategy to a more refined art, as opposed to the traditional stopping role.”

2021 also marks 60 years since the inception of Poc Fada na hEireann and coincidentally, also sees the 40th anniversary of Pat Hartigan winning his first GAA Poc Fada na hÉireann in 1981. He qualified from Munster along with John Fenton of Cork and Peter O’Sullivan of Tipperary. Pat succeeded in winning the All-Ireland title with a score of 87 strokes, competing across a four mile course on the famed Cooley Mountains in Co Louth. As a result of this success, Pat travelled once again with the All-Stars to the US in 1982. Pat would go on to win a second Poc Fada title, again on the Cooley Mountains, in 1983.

Fifty years on and Pat’s name is still highly revered in sporting circles all over Ireland; but to his eternal credit this highly acclaimed man still remains humble about his vast array of sporting achievements.

He is one of our greatest ever athletes, who also gained further sporting success outside the world of GAA for Shot Putting both nationally and internationally.

Therefore, it is only fitting this year to remember and celebrate his achievements on this, the 50th anniversary of his first ever GAA All-Star award, for himself, South Liberties GAA and Limerick GAA.