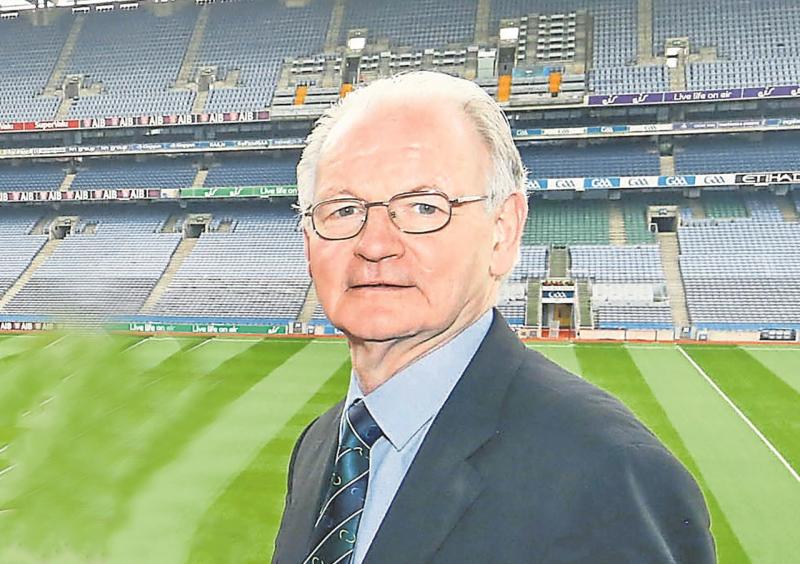 The hugely popular hurling hero passed this Monday afternoon after a short illness.

He is survived by his wife Mary, son Sean, daughter Lisa, extended family, and a wide circle of friends across the GAA community.

While over 50 years in Dublin, Eamonn Rea remained very much a Limerick and Effin man.

"His record on the pitch speaks for itself but he gave just as much off the field of play to the GAA," said Cregan.

Eamonn Rea is reposing at his home on Thursday, November 25, from 1pm to 3pm and 5pm to 8pm only. The Funeral Mass will be on Friday November 26 at 11.30am in Church of St. Jude the Apostle, Willington, Templeogue followed by Cremation in Mount Jerome Crematorium (Victorian Chapel) at 1.45pm.

To view Eamonn’s Funeral Mass on Friday at 11.30am see following link: https://churchmedia.tv/camera/st-jude-the-apostle-templeogue

Family flowers please. Donations, if desired to the William Stokes Unit, Tallaght University Hospital or a charity of choice.

Last month, Rea was in Newcastle West to see his native Effin win the Limerick IHC title and just 10 days ago he attended a meeting of Club Limerick Dublin.

Rea played senior inter-county championship hurling with Limerick from 1964 until 1975. He played 15 times in the championship - scoring 3-8.

Uniquely, Eamonn was marked by his London based brother Gerry in the 1973 semi final.

Before all that, the former St Munchin’s College student, won a Fitzgibbon Cup title with UCC.

He spent over 20 years working with Galtee Food Products in Ringsend.

Then he turned his hand to the pub trade. For the next 20+ years, 25 Parkgate Street in Dublin was home to Eamonn Rea’s Bar - just a short walk from Houston Station it was the first stop for many Limerick GAA supporters for Croke Park matches.

Off the field, Rea filled almost every executive position within the famed club and was the current Club President.

Rea is also synonymous with Club Limerick Dublin or the Limerick GAA Supporters Club in Dublin as it was previously known. Rea was one of the driving forces behind the group and served in every role and remained an active committee member.

"He gave his all to Limerick," said the Limerick GAA chairman.

"Two lovely memories came to my mind today and one was the Monday after the 2018 All-Ireland win and we stopped briefly at the Halfway House, where he was working, on our way back from visiting the Crumlin Childrens Hospital. He was overjoyed and so proud that Limerick had new All-Ireland winners to take over the mantle from 1973. Again in 2020 we had a bite to eat in the Red Cow Inn on the way down from Dublin that night and invited him to meet with us. To see the respect every one of the players had to meet and chat with him was remarkable," recalled John Cregan.

"He was just a lovely lovely man and respected everywhere he went. A great people person and a great conversationalist. Of course there was his bar in Dublin for many years and it was the cause of many Limerick people missing a train home from Dublin!," smiled Cregan.

"He kept the Limerick flag flying in Dublin for a long time and especially when it wasn't always fashionable and we are eternally grateful for that. On behave of Limerick GAA I express our sincere sympathies to his wife Mary, Sean and Lisa and his extended family", said Cregan.

In 2010, Faughs GAA club celebrated it's 125th anniversary. Eamonn pinned the following account of his love for the GAA. 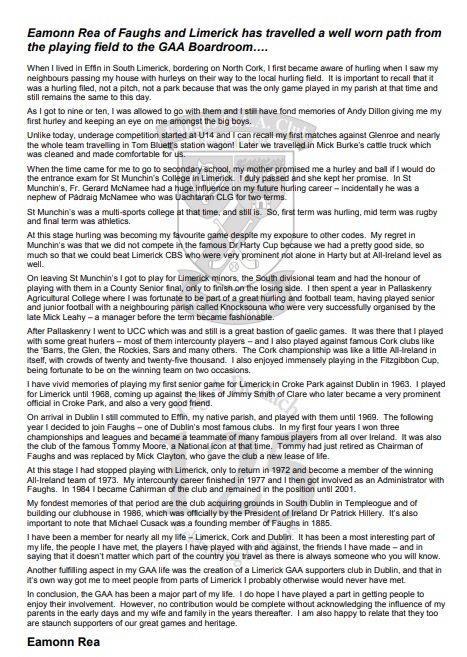