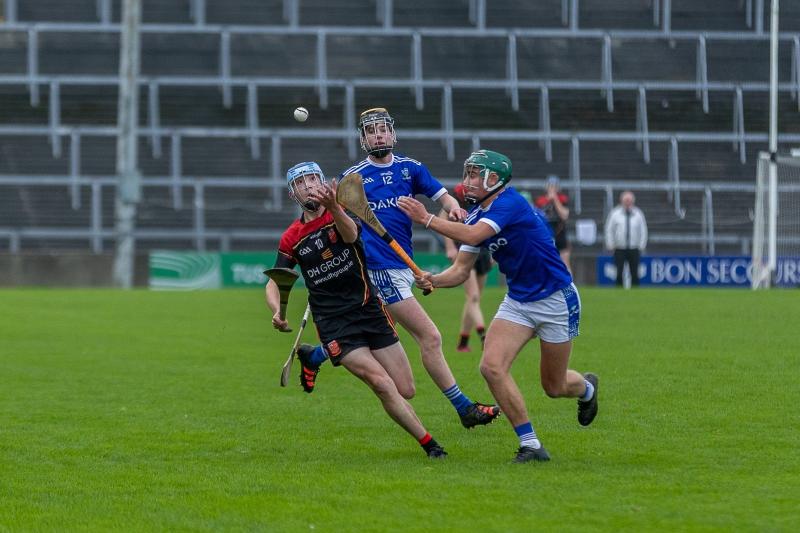 All goals came in the final quarter from Oisin Whelan, Luca Cleary and Dylan Keane Hayes.

It was a one point lead for the Ennis side entering the final quarter when the winning goals arrived.

Ardscoil Ris were backed by a gentle breeze in the opening half and brought a 0-8 to 0-6 lead into the interval.

Danny Chaplin had four pointed frees for the Limerick side in the opening half and he opened the scoring.

But St Flannans were soon ahead with Oisin Whelan (free) and Eoin Kennedy on the mark - 0-2 to 0-1 after six minutes.

The Ennis side weren't to score again in the opening quarter.

Ardscoil Ris had points from Bruree's Fionn O'Brien and Mungret's Sean Duff to open the first lead of the final.

Points from Eoin Begley and Chaplin had the North Circular Road secondary school 0-5 to 0-2 ahead at the water break.

On the resumption, the Clare side hit back to eat into the Ardscoil Ris lead.

Two frees from Chaplin pushed back the St Flannans charge and it was 0-7 to 0-4 after 23-minutes.

A second point from Begley ended the first half scoring for the Limerick side and ensured a two point half time lead, despite hitting six first half wides, which was two more than their opponents.

St Flannans hit the ground running in the second half and had four successive points to into into the lead.

And, it could have been a bigger lead but for a superb save from John O'Connor in the Limerick goal to deny Oisin Whelan a goal.

Chaplin (free) and Marc O'Brien hit back for Ardscoil Ris to level at 0-10 each on 10-minutes.

Sean Arthur went close to an Ardscoil Ris goal but Cian Howard was quick off his line to smother.

At the water break it was St Flannans that edged 0-12 to 0-11 clear with another Whelan free.

In the final quarter came the three winning goals for the Clare side.

The first goal came just after the restart - Oisin Whelan unmarked in front of goal after a fine passing move and he made no mistake from close range.

With Bruff's Tadgh Boddy scoring after his introduction as a sub, St Flannans were soon 1-15 to 0-12 clear.

Five minutes from time, the men in blue scored their second goal - Luca Cleary finding the net for a 2-15 to 0-13 lead.

In the final minute captain Dylan Keane Hayes sealed the win with their third goal.