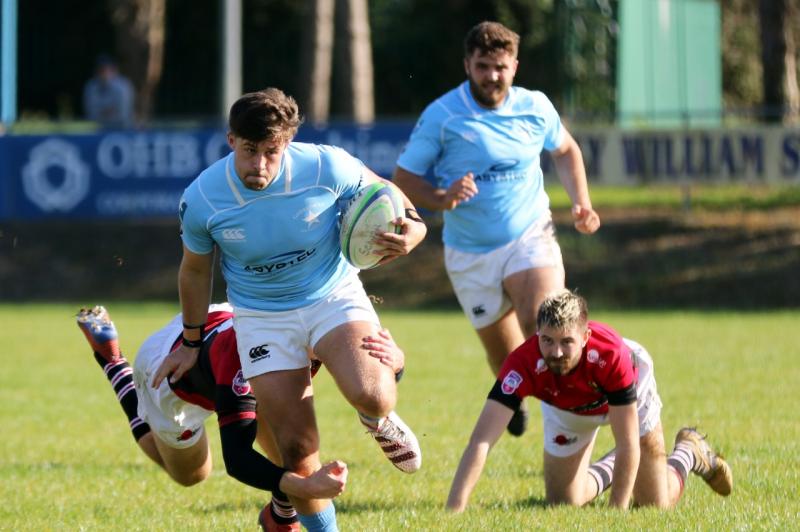 Garryowen FC Man of the Match Jack Delaney charging through the UCC defence during their Energia All-Ireland League Division 1A fixture at Dooradoyle Picture: Kieran Ryan-Benson

THERE were three Limerick wins in the Energia All-Ireland League on Saturday as Garryowen and Young Munster continued their winning ways in Division 1A, while Shannon scored their first success of the campaign in Division 1B.

Garryowen made it back-to-back bonus point wins over college sides were easing past UCC 32-20 in Division 1A at a sun-kissed Dooradoyle.

The win sees Garryowen move top of the 1A table, the only side to secure two bonus point wins in the top flight.

Hot on the heels of their opening weekend bonus point win away to Dublin University, the Light Blues ran in five tries against the Cork students much to the delight of the home supporters who were attending a first home fixture in the League for 20 months.

The sides were tied 10-10 at half-time, Garryowen scoring two tries in that opening period through hooker Pat O'Toole and winger Tommy O'Hora.

Garryowen stretched clear in the third quarter as winger Colm Quilligan added a brace of tries to seal a maximum five-point haul from the game, while full-back Jamie Shanahan also dotted down.

Meanwhile, second-placed Young Munster are another side on two wins after the opening two rounds of fixtures following their gritty 24-17 success over great rivals Cork Constitution at Temple Hill.

Munsters' led their hosts 11-3 at half-time at Temple Hill. Conor Hayes made it two tries in two AIL games this season when dotting down, while the reliable Evan Cusack slotted two penalties for the Greenfields side.

A second try for Munsters', scored by Patrick Campbell and superbly converted by Cusack, helped the Limerick side into a substantial 18-3 lead.

Cork Con took advantage of Munsters' having two players sin-binned to reduced their arrears to 10 points at 18-10.

Indeed, Con managed two tries during the second period through a penalty try and one from Barry Galvin.

In Division 1B, Shannon, who agonisingly lost out 23-22 to Old Wesley on the opening weekend, bounced back in style with an impressive 32-10 bonus point win over Banbridge on the back pitch at Thomond Park.

The win has seen Shannon move up to fourth place in the 1B table.

16 Shannon advancing towards the Banbridge 5 after the lineout. We take it into contact and gain a penalty and go for the scrum pic.twitter.com/2K1riiaiLM

Shannon raced into a 10-0 lead inside as many minutes thanks to an Alan Flannery try and a penalty goal and conversion from the boot of John O'Sullivan.

A Jack O’Donnell try on 25 minutes saw the Parish side increase their advantage to 15-3, before Banbridge struck back with a converted try for 15-10.

Crucially, Shannon grabbed their third try of the opening half just before the break when Jordan Prenderville touched down after a well-executed maul to leave 10 points between the sides at the change of ends, 20-10.

Ireland U20 player Daniel Okeke pounced on Jack O’Donnell's chip through to score the bonus point try for the home side 10 minutes into the second half for 25-10.

Shannon also added a fifth try when Aran Hehir ran from inside his own half to score on 55 minutes and seal the win.

Meanwhile, UL-Bohemian are still searching for their first win of the campaign and find themselves bottom of the 2A table, after shipping a 33-13 defeat to MU Barnhall at Parsonstown.

The Red, Red Robins trailed 6-14 at half-time, having led 6-0 early on thanks to two penalty goals from Harry Byrne.

After falling those six points in arrears, Barnhall hit back with 26 unanswered points, including four tries, to secure the bonus point and led 26-6.

UL-Bohs did hit back with a try in the corner from Kieran O’Shea following a strong lineout drive. Byrne's successful conversion made it 13-26.

However, MU Barnhall hit back with a fifth try before full-time to seal an impressive success.

Also in Division 2A, Old Crescent fell to a 21-40 defeat to Queens University at Takumi Park, while UL-Bohs also suffered their second successive loss when going down 33-13 at MU Barnhall.

Crescent, who are ninth in the table after the opening two weekends, trailed Queen's University 14-28 at half-time at the newly named Takumi Park in Rosbrien.

The home side, who dug themselves into a big hole when trailing 0-28 after half an hour, did respond with two converted tries before half-time through Cian Reale and Jack O'Mahony. Ronan McKenna converting both.

Any thoughts Crescent may have held of pulling off a dramatic comeback were ended when QUB racked up 12 unanswered points, including two further tries.

The home side did manage a third try from their forwards in the 75th minute, which McKenna converted. However, by then, the game was well beyond Crescent.

In Division 2C, Bruff had to make do with taking a losing bonus point from a frustrating 17-18 reverse at the hands of Skerries at Kilballyowen Park.

Bruff had led their game with Skerries 11-5 at half-time, while two further penalty goals saw the home side move into a 17-8 advantage.

However, Skerries finished the game strongly, hitting back with 10 unanswered points, through a converted try and decisive penalty goal from Paul O'Loghlen.

The losing bonus point will seem like very scant reward for the home side, who sit in ninth place in the table.