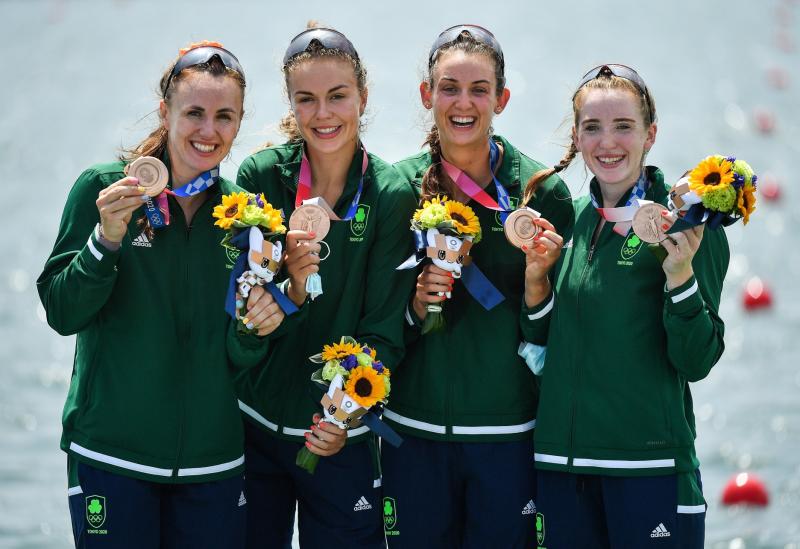 THERE is much joy in Limerick this Wednesday after the Tokyo Olympic medal success for an Irish rowing crew.

The Women’s Four, who took home bronze medals became the first Irish female rowers in history to do so.

It's 29 year old Aifric Keogh that has many across Limerick celebrating.

Both her parents, Jim and Susan are Limerick natives.

"All her family are in Limerick apart from her immediate family," her over joyed mother Susan told the Limerick Leader this morning from her Galway home.

Susan (Deegan) is a native of Janesboro and her husband Jim Keogh is from Mulgrave Street.

"We left for work in the early 70s and went to Dublin and then moved to Galway," explained Susan of their journey to Furbo in Co Galway.

All in Galway, mother, father, sister Ciara and brother Conor, and the extended Limerick family stayed up until the early hours of the morning to watch the Womens Four final in Tokyo.

"Just waiting for the final was so stressful and that's not to mention the race itself," said Susan.

Aifric started rowing in 2006 in the Jes in Galway, and studied food microbiology at UCC. She part of the women’s double earlier in this Olympic campaign.

A world championship finalist who finished sixth, with Emily Hegarty in Paris 2018, they were the first Irish women’s pair to make a World final.

When Keogh and her crew qualified for the Olympics at the very last chance in Lucerne two months ago, few would have predicted that they might go on to challenge the established nations in women’s fours.

But second place in Saturday’s heats placed them right alongside pre-race favourites Australia and the Netherlands, and although Poland took the early lead it was the Dutch and the Aussies who shared the lead throughout the middle of the 2000m race.

Inside the last 500m Great Britain and China were sharing third, until Hegarty upped the rate to 43, and the crew responded, timing their attack to perfection. While Australia struck the killer blow to take gold ahead of the Netherlands, Ireland came storming back from fifth place to blow away China and GB and claim the bronze.