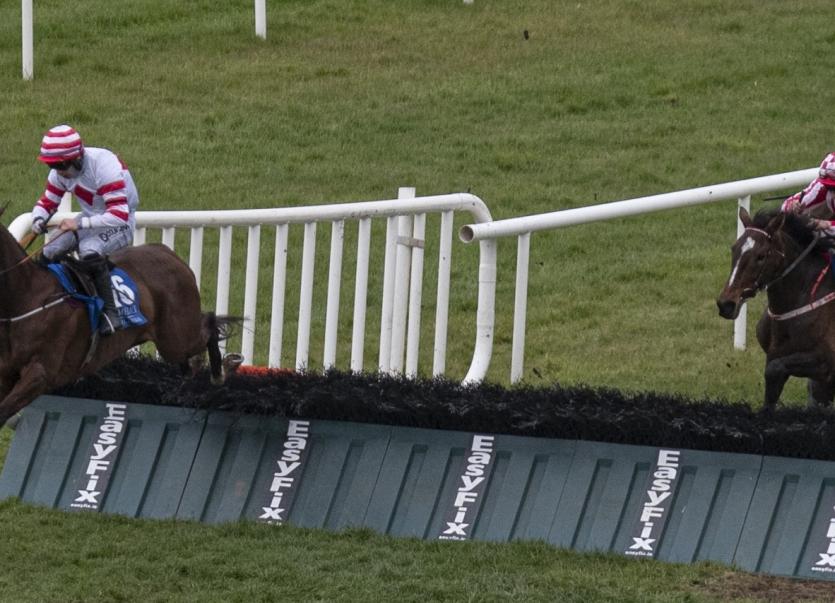 ATHEA-based Eoin McCarthy won the second division of the two-mile three-furlong handicap hurdle at Limerick on Monday last with the well-supported Rathnaleen Tou.

The seven-year-old was having his first start for the trainer and ran out a comfortable winner under Kevin Brouder.

McCarthy said of the 3/1 favourite, “She’s a lovely straight forward mare. She had done some lovely bits of work with horses that we like so we thought off a mark of 80 she was well-in. Kevin is riding really well and he comes in to ride work twice a week. He’s a really good rider.”

Ballingarry jockey Billy Lee recorded two winners at Tipperary on Tuesday, riding his first of the evening on Inventor which is trained by his sister Gillian Scott in Ballingarry.

Owned by Catriona MacNabb, the 10/1 chance scored with plenty in hand, winning by a length and a quarter from the Katy Brown-trained Niamh Elizabeth. Lee followed up when winning the evening’s finale on the John Kiely-trained Pinpointed.

The easy-to-back 100/30 chance picked up well inside the final two furlongs to win by a length and three-parts from Rodger Sweeney’s Matilda With Me.

Ballingarry-basted trainer Richard O'Brien enjoyed a change of luck when winning the opening division of the nine-furlong handicap with the Kate Hassett-owned Morph Speed. Scott McCullagh had an easy time of it on strong 11/4 favourite which came from just off the pace and was much too good for the Fozzy Stack-trained Kew Palace inside the final furlong.

Three lengths was the winning distance and O'Brien reported, “It was his first run for me the last day and I actually thought he’d win. I was a little disappointed because not a lot went wrong. He has done that very well today.”

Shanagolden jockey Chris Hayes moved on to the ten-winner mark for the season with an easy success on the Jimmy Coogan-trained Stop On Red in the eight-furlong handicap at Dundalk on Wednesday last.

Both men are in the best of form and their 6/5 favourite romped to a three-length success over the Michael Halford-trained Rosa Dartle just three days after losing out in a four-way photo-finish at the track.

Favourite backers were off to a flyer at Limerick on Saturday where the Billy Lee-ridden Corps Des Pages won the seven-furlong maiden in battling fashion.

The Paddy Twomey-trained 6/4 shot looked set for a comfortable success when going past the front-running Lunar Space inside the final furlong but the eventual runner-up made it interesting and maintain his challenge all the way to the line with only a short-head separating them.