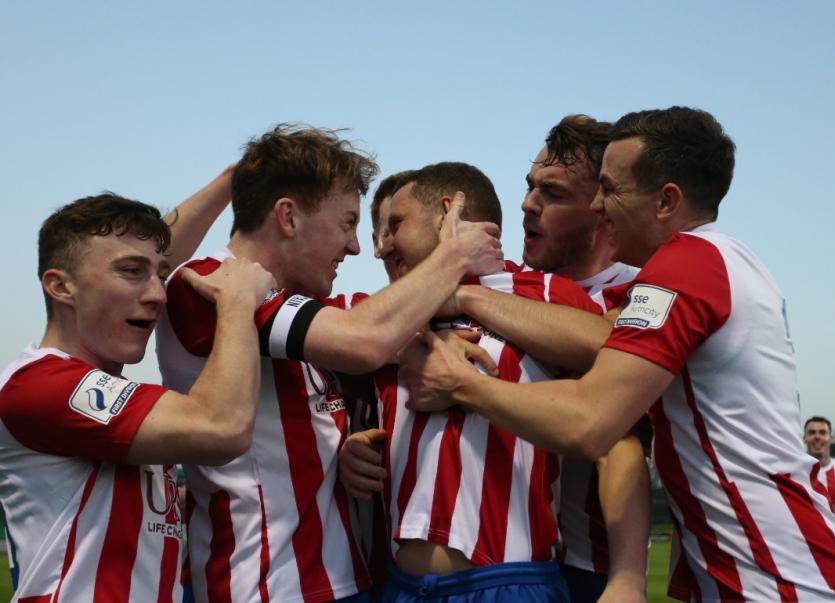 Treaty Utd's Anthony O'Donnell is congratulated by team mates after heading scoring in the First Division fixture with Wexford FC at the Markets Field on Good Friday Picture: Kieran Ryan-Benson

TREATY United senior men's side picked up their first win in the SSE Aitricity League First Division when securing an historic 1-0 victory over Wexford FC at the Markets Field on Good Friday night.

Defender Anthony O'Donnell headed home the game's only goal after 28 minutes as Treaty Utd survived a sending off for the second successive game to ensure their first ever home league fixture ended in a victory.

Match winner O'Donnell, who most recently played with Cork side Ringmahon Rangers, also had a spell at Limerick FC where he played for the U19 side.

Treaty showed admirable resilience after losing Clyde O'Connell to two yellow cards in the 66th minute to claim the spoils and take their points tally in the First Division to four following their opening weekend draw at Bray Wanders.

The league newcomers are also yet to concede a goal after three hours of football, a statistic that is sure to please manager Tommy Barrett.

Treaty United made three changes to their starting line-up from their trip to Bray on Sunday last.

Shane Cusack replaced Tadhg Ryan in goal, while the fit-again Joel Coustrain also came into the team for his competitive debut for the Shannonsiders along with Clyde O'Connell who returned after serving one-match suspension.

The Limerick side were minus the services of the suspended Sean McSweeney, who was sent off after picking up two yellow cards at the Carlisle Grounds.

Treaty opened the game in lively fashion with Matt Keane raiding down the right, before whipping in a couple of delightful crosses.

Mind you, the home side had goalkeeper Shane Cusack to thank for not falling behind just after 10 minutes when he did superbly to deny Jack Doherty after Karl Manahan’s ball evaded the defence.

It was the home side who struck for the game's opening goal on 28 minutes. From a free kick on the right from Marc Ludden, captain Jack Lynch flicked the ball on and the alert defender Anthony O'Donnell powered a header to the back of the Wexford net.

Twenty six-year-old O’Donnell, who has previously played with Limerick FC as well as Cobh Ramblers, joined Treaty from Munster Senior League side Ringmahon Rangers during the closed season.

To their credit, Wexford hit back and came close to grabbing an equalising shortly afterwards, only for Paul Fox’s effort to be  cleared off the line by an alert Marc Ludden.

Tommy Barrett's side maintained their lead until the break, although the visitors might have felt that, with their first half endeavour and chances created, they were good value for at least one goal.

Visitors Wexford looked more threatening after the restart as they went in search of an equaliser in Garryowen.

Treary were dealt a blow on 66 minutes after having a player sent off for the second successive game. This time Clyde O'Connell was dismissed after picking up a second yellow card.

Wexford enjoyed the greater amount of possession through the next 20 minutes, but failed to create much by way of a decent scoring opportunity. Any time the visitors did get the ball into the box. Treaty 'keeper Shane Cusack dealt with the minimum of fuss.