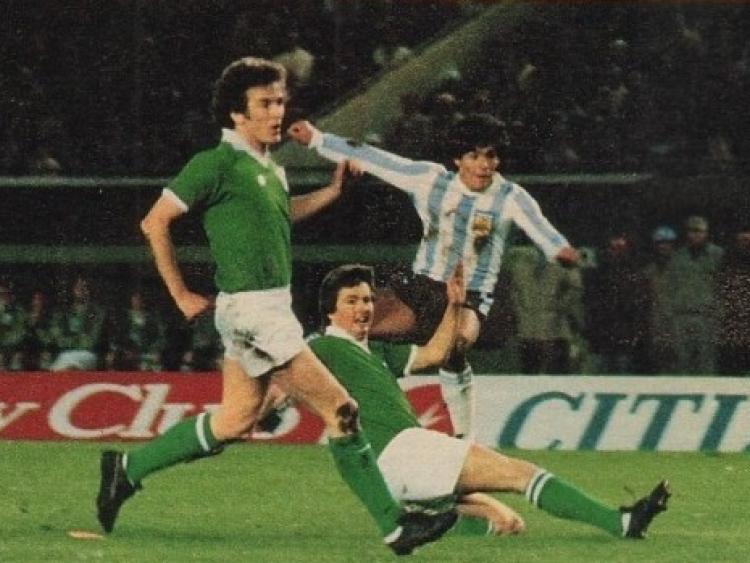 Limerick man Pat Nolan, centre, tries to block a shot on goal from the late Diego Maradona during a League of Ireland XI fixture with world champions Argentina at River Plate Stadium in 1980

A DECORATED Limerick soccer player, who had the distinction of marking then teenage soccer sensation Diego Maradona in an international fixture in Buenos Aires in 19802, says his genius as a player was evident even then.

Pat Nolan, who won League of Ireland and FAI Cup honours with Limerick, lined out on a League of Ireland XI which faced World champions Argentina at the famed River Plate Stadium in front of more than 70,000 passionate spectators some 40 years ago.

Pat Nolan recalled to Leader Sport: "That trip to South America came about after we had just won the league with Limerick in 1980 and the League of Ireland were due to tour Argentina. It was about a three and a half week tour.

"Johnny Walsh, Brendan Storan and Gary Hulmes and myself from Limerick were chosen to travel. It was a bit of an adventure. South America, wow!

"There are not many times you get to go there. There was a lot of uncertainty politically there, people went missing, it wasn't a place you would choose to go on a holiday.

"We headed off and the first game happened to be against the full Argentinian XI. Argentina had won the World Cup in 1978 and very were much the number one team in the world at that stage.

"They had five of the World Cup winning side playing against us plus Maradona.

"You are playing the world champions in front of 70,000 passionate fans and with a young fella in their side who is supposed to be the next superstar of world football. You couldn't script a worse scenario I'd imagine."

Nolan was tasked with marking the mesmeric Maradona when he came inside the Irish side's half of the pitch.

He recalled: "We were aware of Maradona's reputation somewhat at that stage, but not to the extent that it grew to later on. You could see when he played that night he was exceptional. You could see that there was a quality there which put him above other players. He was on another level.

"I don't think it was my decision and I would use the term 'mark' loosely. I had the onerous task of picking him up when he got into our half which was most of the game.

"I don't think I ever got very near him. He was just exceptional.

"We just got on with it and with a bit of Irish luck and some good defending we held out for a 1-0 defeat which was incredible.

"Argentina came to Ireland the week after and played the full Republic of Ireland team with the same squad. It was the same score too, 1-0."

A picture was taken on the night by a Spanish magazine of Maradona rifling the winning goal against the League of Ireland XI into the net, with Nolan doing his utmost to block the effort.

The photograph was a memento of the game the Limerick defender dearly wanted and he duly tracked down a copy after some time.

"Ya, I have a copy of the picture of the goal being scored. It is to my horror the clip of the goal is on Youtube too! Ball watching isn't the word for it. I got caught, got caught the wrong side of Maradona and he sneaked in to score the only goal of the game.

"I tracked down the picture eventually. It is a treasure. I have always treasured it and it's one of my fondest and dearest memories.

"As Tony Ward said to me back in about 1978/79, you can have all the trophies, all the caps and all the jerseys, but if you don't have memories, you have nothing. That is essentially correct.

"The other League of Ireland player in that picture is Paddy Dunning from Dundalk. He was a very good player who also played with Shelbourne and was an Irish international.

"Of the Limerick lads, Johnny Walsh played the same night. Brendan (Storan) was on the bench and Gary was on the bench. I often tell the story about Gary, he'll hate me for this, he was due to come on with 15 minutes to go.

"He was warming up on the sideline and I think he pulled his hamstring, so we had to send the physio on to sort him out. He didn't get on much to his dismay.

"Maradona had this unbelievable pace. Once you have pace in any sport you are a yard ahead of everyone straight away. He was strong, he had great vision, he was very direct. All he saw was the goal, end of story.

"If he couldn't do it, he would give it to someone else to do it. He was just an exceptional talent.

"The thought of asking him for his jersey after the game did cross my mind. I have a small bit better Spanish now than then. If my Spanish was better back then it might have helped me get the jersey.

"By the time I got to him he was surrounded by press and photographers and minders. It is a regret, but it's one of those things. There are not many people can say they watched world class players and there are even less can say they played against them.

"With Napoli, he went on to win two Italian league championships. Napoli were a very average team. It was Maradona who won the league titles for them. He played in four World Cups and managed Argentina in one as well. That's remarkable. Incredible.

"I know his off the field exploits probably interfered with his talent on the pitch, but there is no denying that he was truly one of the greatest. The second goal he scored against England in the 1986 World Cup quarter-final - it's always overshadowed by the handball - but that second goal is pure quality. You can't take that from him. I don't think you will see the likes of him again.

"I would say he was the greatest player ever, because I have a soft spot for him, having played against him and having been there in Argentina.

"The minute the game was over he was surrounded by press and an entourage of people around him, in fairness he probably had a difficult life or no life in a sense, his football and getting out on the pitch was a getaway, an escape from everyday run of the mill, every day life.

"Three days of national mourning taking place in Argentina right now shows the status of the man. It really puts it in perspective. He is beloved all over the world."