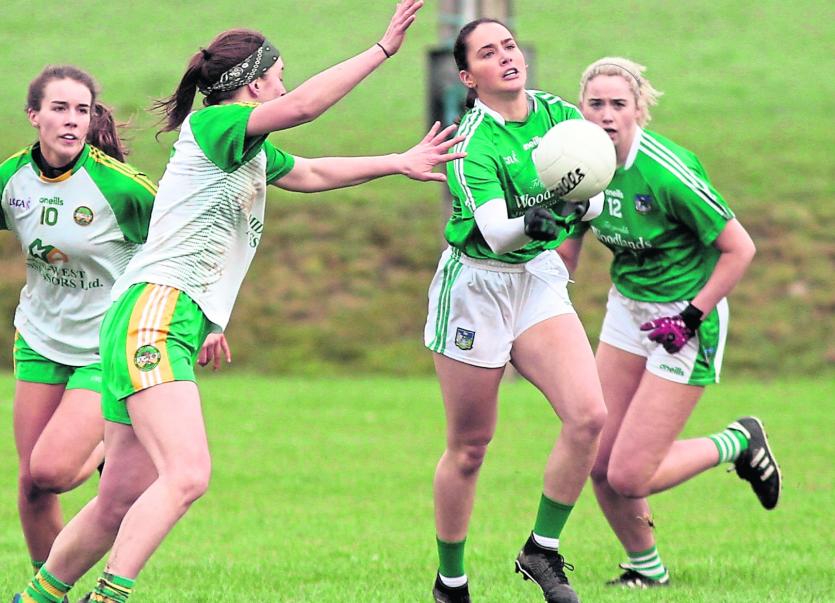 THE Limerick Ladies Football side are on their travels for their next two weekends in the TG4 All-Ireland Junior Championship.

The Donal Ryan managed Limerick play Derry this Sunday at 2pm v Derry in Lannleire, Co Louth and in round 2 Limerick will play Antrim on Sunday November 1 at 1pm in Clane, Co Kildare.

At least one victory is needed to send Limerick into a November 21/22 semi final against Wicklow, Fermanagh or Carlow.

“You have to have a goal,” said manager Donal Ryan.

”Getting out of the group and into a semi final is where we want to be,” he said.

“We went back on September 15 but with the county finals not on until September 27 we were without a lot at the start. We are really only all together for two weeks. A lot of them had a lot of games played, between club championship and club challenge games. We would have loved to get an inter-county challenge game but time was against us,” he outlined ahead of leading Limerick into his first championship.

All-Ireland junior champions in 2018, Limerick were relegated down from the intermediate ranks last year.

The 2020 league was unfinished due to Covid-19 but Limerick had five games played – one win, one draw and three defeats.

The Limerick win was a big 5-13 to 0-3 win over Sunday’s championship opponents Derry.

”We are not looking at that Derry result at all,” stressed Ryan, adding he expects a very different starting line-up from the Oak Leaf County on Sunday.

“It would be great to get off to a winning start. That gives us momentum for the following week and then hopefully it would buy us three weeks before the semi final,” said Ryan.

Looking back at the league, Ryan is pin-pointing a defeat as their best display.

“The Louth game was the one that I was delighted with. We lost but it was how the girls reacted when we went behind and how they played. It’s was Louth’s first game back after winning the All-Ireland and we had to go up there but it was a game that I was happy with.”

Ahead of the championship the Limerick manager said that finding any form lines is impossible.

”We are just concerned about getting our own house in order. It’s very hard to know what is happening in other teams at the moment so we are only focused on ourselves.”

While Ireland moves into new Covid-19 restrictions, Ryan is happy for inter-county sport to continue.

“For a lot of people sport is important. It gives people something to watch on television,” he said.
”We are going up to Louth and there are a lot of steps that have to be taken. We are allowed to go by bus but with just 50% occupancy of a 52 seater bus. All guidelines were laid down for us - masks for subs, and management only allowed in certain areas of the field, etc,” he explained.

”At the end of the day it gives them (players) an outlet. They were delighted to get back in and we are all doing the best we can in terms of Covid-19 guidelines. It would be wrong to say otherwise because of course there would be some girls that feel apprehensive about the whole thing.

Limerick have a panel of 30 players.

“​We have lost a few girls and a few to injury but we have brought in a few as well,” said Ryan.