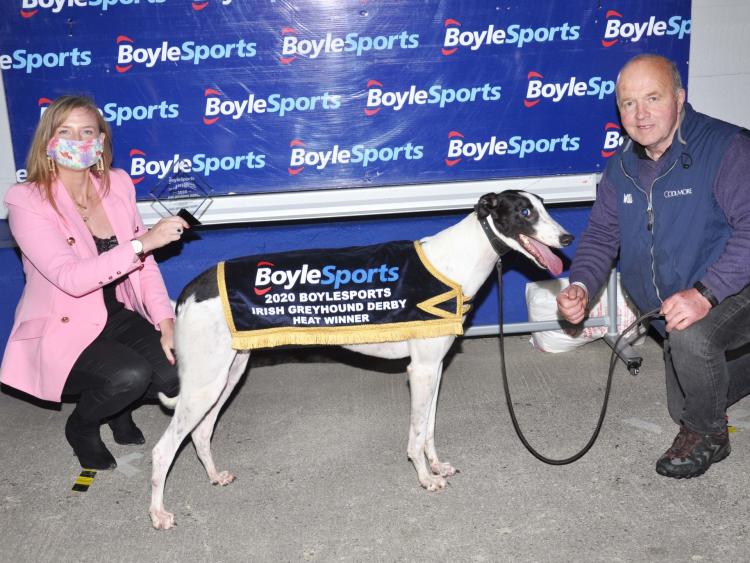 Neilus O'Connell with Sarah Kinsella of sponors Boylesports and Razldazl Peaky, winner of the Irish Derby Consolation Final in Shelbourne Park on Saturday

THERE was success on Derby Night in Shelbourne Park for Limerick trainer Neilus O’Connell.

The Derby Consolation final saw victory for Razldazl Peaky, owned by a Kildare-Kilcolgan syndicate and trained by O’Connell.

The winner’s time was 29.19. The Limerick based trainer’s star shot from trap two to lead into the opening turn and this was to prove decisive.

The well-backed favourite Toolmaker Sydney gave chase down the far side and attempted to challenge at the third turn but had the door closed on him.

Once that happened there was only going to be one winner. Razldazl Peaky raced right to the line and the son of Makeshift and Razldazl Pru emerged a three-length winner.

That landmark victory came in Kingdom Greyhound Stadium in Tralee when Razldazl Lulu won an A5 525 in the second race of the night.

While O’Connell was securing that win in Dublin, the regular Saturday night racing was underway in Limerick.

The opening race was an A5 525 – won in 29.57 by Adamant Antares for John Rainsford and the Who Me syndicate. A length back in second was Adamswood Mill for Larry Mulcaire.

Hidden Jaylo won for Kathleen Browne in an ON2 525. The winner had two and three quarter lengths to spare on the line in a time of 29.27. Second was Redzer Regera for Pat Reddan.

There was a sprint win for Ned O’Dwyer with Ballyhone Blake. In 1933 the winning margin was two lengths. Second for for Buttsys Buckos syndicate was Buttsys Best.

The Walls of Tally Ho syndicate won with Tallyho Hope in an A5/A6 545. The winner was two lengths clear in a time of 29.40. Second was Two Amigos for Padraig Fitzgerald and Michael Griffin with trainer Maurice Fitzgerald.

Hitachi Danny won for Patrick Sheehy in an A8/A9 525. The winner was all of 14 lengths clear in a time of 29.31. Back in second was Wheres Me Tae Woman for Ger Carmody.

Another John Rainsford trainer winner on the night was Stonepark Ali for Michael Sean O’Dwyer. The A6 525 win came in 29.70. Three and a half lengths back in second was Timaru Theresa for Phil and Fionnuala Moloney.

Cozzys Gem won for Donal Duggan and owners Sean Cosgrove and Stephen Sheedy in an A4 525. The win just came on the line in a time of 29.39. Beaten a head into second was Tiermana Caramel for Noel Moroney.

There was an Open A1 525 success for Cosard Jet for the DGR syndicate. The winning time was 29.12 Three lengths back in second was Ballybrack Gem for Padraig O’Lore and owner Luke Murphy.

Vigorous Boss won for Ronny Wuyts in an A3/A4 525. The winner had three lengths to spare in a time of 29.58. Second was Hawkeye Supreme for Dan Murphy.

Mine Claus won for Frank and Mary Browne in an A2 525. The winner had two and a half lengths to spare on the line after a run of 29.38. Second was Treaty Star for Tony Barry and Donna Daly.

The final race of the night was an A4/A5 575 – won in 31.94. Recent Event won for John Franklin by a length and a half. Second was Hazelhill Queen for Micheal O’Connell.