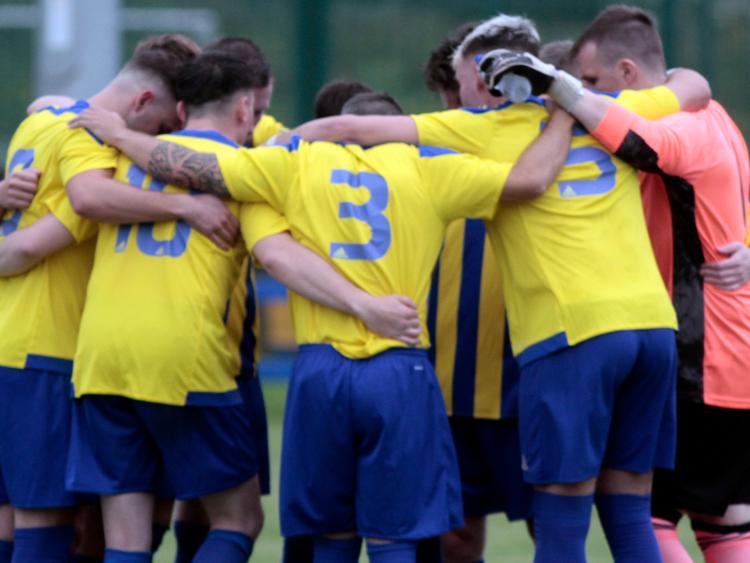 THERE were four Premier League games this weekend, as the Limerick District League kicked off in earnst.

Ballynanty Rovers recorded their second win when accounting for Geraldines at LIT on Sunday. Conor Ellis and Ger Barry had Balla two goal to the good by half time.

Shane Byrne pulled one back for the visitors but almost immediately Aaron Nunan restored the two goal deficit. Further scores from Derek Daly and Ellis completed the scoring.

Two sides who had a poor opener met and both showed a big improvement. Kilmallock took the lead through Tommy Heffernan but a Frank Harnett header levelled the tie.

Kilmallock regained the lead through Jason Heffernan and again Coonagh replied, this time with a brilliant solo goal from Brion Moriarty.

Just after half time Moriarty scored again to give Coonagh the lead and midway through the half Will Brick beat two men and rifled home into the top corner from 35 yards before Andrew Leydon added a fifth minutes later. Anthony Punch scored a late consolation for Kilmallock.

A thriller in Mungret ended with the home side sharing eight goals with a new look Janesboro. ‘Boro started in style and raced into a tow goal lead courtesy of David Hannon and Shane Kelly.

Mungret emerged from their slumber after the restart and Kian Barry pulled one back with the help of a deflection before Yakuba Yabre levelled matters from the spot.

Declan Cusack marked his debut with a beauty to put the home side in front however Conor Madden then headed the sides level.

Nenagh looked odds on to hold high flying Aisling on Sunday with the sides deadlocked four minutes from time. However the Munster Champions had other ideas and Shane Clarke played Aaron Murphy through who fired a beauty in off the crossbar to win all three points.

In the Premier A League the weekend action highlight was the game in Moyross where the locals welcomed Athlunkard Villa.

Ryan Earls gave Moyross the lead but a great comeback inspired by Danny Taylor, saw Adam O'Regan and Aodhan Keane net to give Villa the points.

Adrian Ryan (2), Liam Quinn and Dave Ryan were on target as Murroe picked up a second win over Carew Park.

Aaron Grant and Barry Gibbons were on target for Southend in a 2-2 draw with Knockainey. Nick Hayes and Dean Byrne replied while Jason Daly marked his return from injury with a goal for Star Rvs in a 1-1 draw with Shels for who youth player Shane Griffin netted a last minute equaliser.

Castle Rvs and Ballylanders played out a 3-3 draw. Micheal Ryan (2) and Marcus Kiely for the home side, Eamon O'Mahoney (2) and Ciaran Kelly for Ballylanders were on target.

Summerville bounced back to score a good win over Geraldines B thanks to scores from Shane Power , Evan O'Grady, Val McDermott, Ian Dore and Kuba Ciecloch.

In Division 1B Cals,beat Athlunkard Villa B 3-1 with scores from Cathal O'Connell (2), and Mike White while Pallagreen hit Glenview Rvs for five through Mick Gammell (2), Adam Keogh, Mike Ryan and Vinnie Ryan.

Mungret Reg and Parkville shared the goals and spoils. Vitalie Alcedarevschi for Mungret and Barry O'Sullivan Mungret were on target.

Regional Utd B and Caherdavin Celtic also finished all square. Sam Gleeson and Jeff Mannion netted for the home side. Cian O'Rahilly and Damien Conway replied for Celtic.

In Division 2A Jason Flanagan was on the mark for Hyde Rgs in a 1-1 draw with Castle Utd.

Corbally Utd B with goals from Richard McMahon (2) and Dara Cullen edged out Wembley 3-2.

Ray Massey claimed a hat trick and Zaki Ahmed was also on the mark as Prospect B beat Kilmallock B.

Meanus hit Murroe B for six thanks to Shane O'Connell (3), Con Burke (2) and Gary O'Connell.

In Division 2B Northside squandered a three goal lead to a rampant Fairview side who went on to win 6-4 thanks to goals from Ethan O'Sullivan (2), Lee Whyte, Darren Roche, Craig Reddan and Jason Benn. Dean O'Brien, Neil Wallace (2) and Shane Guerin scored for Northside.

Danny O'Connor scored for Kilfrush B but they fell 5-1 to Aisling for whom Manni Ajuong (2), Gillan Piveteau, Gearoid Hegarty and Karim Haimoud were on target.