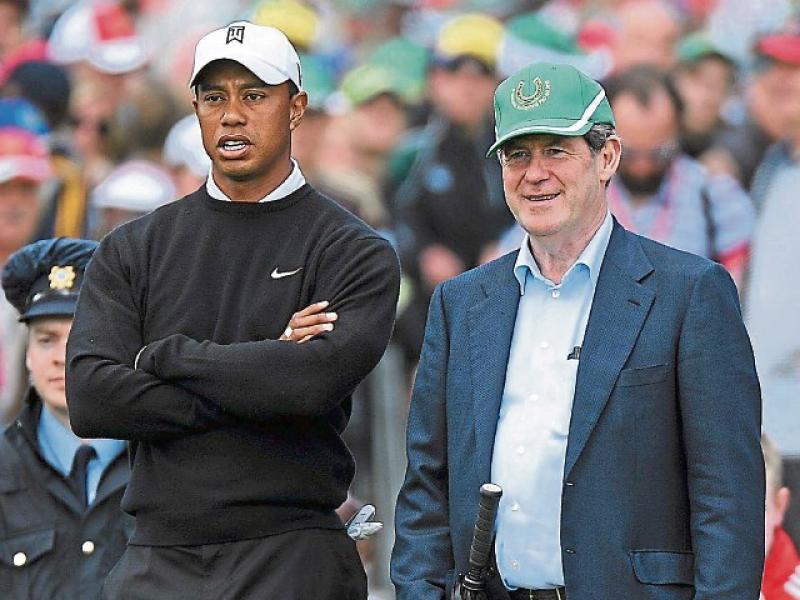 2019 US Masters champion Tiger Woods, left, with JP McManus at the JP McManus Pro Am in Adare in 2010

THE world's best professional golfers had been due to be in Limerick this week for the JP McManus Pro-Am at Adare Manor Hotel and Golf Resort.

However, the coronavirus pandemic forced the postponement of the charity two-day event until July 5 and July 6, 2021.

The JP McManus Pro-Am is a complete sell-out and all entrance tickets in the form of caps purchased will be valid for the rescheduled 2021 event, as will all on-site parking and Park and Ride passes.

The Pro-Am Committee is set to release more information about the rescheduled event in the coming weeks and months, including confirming the line-up of players who will be competing in Adare in 12 months time.

Among the players and celebrities who had confirmed to play in the 2020 renewal of the Pro Am in Adare were Tiger Woods, Rory McIlroy, Phil Mickelson, Dustin Johnson, Justin Rose, Brooks Koepka, Adam Scott, Luke Donald, John Rahm, Sergio Garcia, Mark Wahlberg and Niall Horan.

Indeed, eight of the world’s top 10 players had confirmed for the two-day event and golf fans will hope that these players will be available to tee it up in Limerick in 12 months time.

The primary purpose of the JP McManus Pro-Am is to raise money for charitable organisations, mostly located in the Mid-West region. To date, over €140 million has been raised and this figure is set to rise by many millions more by the time the 2021 event is finished.

The JP McManus Pro-Am teed off for the first time 30 years ago in 1990 at Limerick Golf Club, with the aim of raising much-needed funds for charities and organisations in the Mid-West region.

The 42 teams competing consisted of one professional and three other players, and they helped to raise almost €1.2 million for local charities.

Roger Chapman took home the trophy. The succeeding event took place five years later in 1995 when the European Tour became involved with the management of the tournament.

After further stagings of the Pro Am in 1995 and 2000, at Limerick Golf Club, the event moved to Adare Manor Hotel and Golf Resort in 2005. The most recent Pro Am in 2010 again featured a star-studded line-up of world class golfers from both the European and PGA Tour.