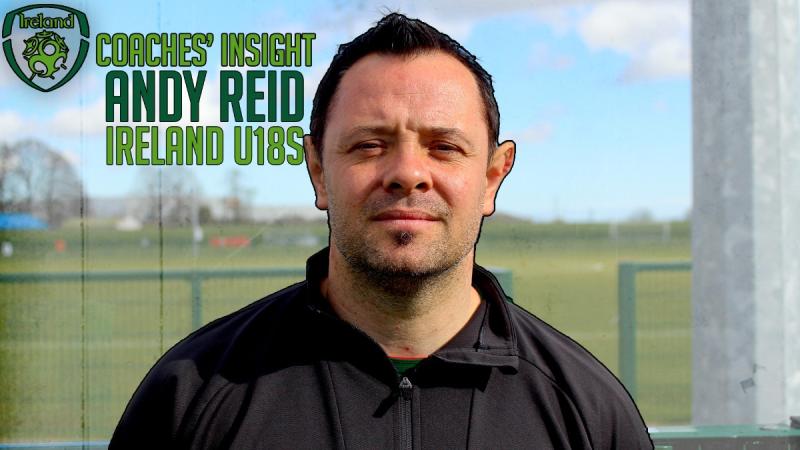 A year since Republic of Ireland Under-18 Head Coach Andy Reid took over the reins, the ex-Irish international, who earned 29 caps with the Boys in Green, gives an insight into his coaching.

From Caretaker Assistant Manager with Nottingham Forest to studying the methods of Bill Belichick of the New England Patriots.

What is the one key attribute you need as a coach?

It’s very difficult to pick just one but if you’re a coach at a high level you will have a great knowledge of the game anyway so I would preparation. Whether you’re preparing your training sessions or preparations leading into a game i.e opposition analysis. I would say preparation is a massive attribute needed for a coach.

What is your favourite thing about the job?

I was lucky enough to have a career in the game so to be able to pass on my knowledge and experience to players who are treading the same path as I did is probably the most rewarding thing. I understand what these players are going through as I’ve come through the youth system of Ireland so it’s nice to share my experience with the next generation.

Not really. I’m just so focused on the game and thinking of all the possibilities of what could happen and what I can do to influence it in a positive way.

What one message would you give to a player to keep with them throughout their career?

The biggest piece of advice I can give to any player is to stay humble, it was advice given to me when I was very young. Irish people and coaches within the association want to produce technically good players with a drive and desire but we want to develop these young men as good people too – it’s very important. For me staying humble is massive.

Which coach/manager – from any sport – have you taken your greatest inspiration from?

I really like the tactical side of the NFL and the top coach in that would be Bill Belichick of the New England Patriots. I’ve watched documentaries and read books about him and I love listening to him talk about the game. He’s someone who I would take inspiration from. When you hear players speak about him they always seem so certain of what is expected of them when they go out onto the pitch. All the good coaches I worked under you always knew exactly what they wanted from you when you went out to play. That really comes across when people speak about Bill Belchick, they’re prepared mentally and physically. He oversees the whole football operation of New England Patriots – that’s really admirable. I think it’s very important to take learning from different sports.

Favourite match you coached and why?

When I was with Jim Crawford and the Under-18s at the Pinatar tournament in Spain and we managed to beat the Netherlands 1-0. I was so pleased for the lads, for Jim, for Denis Hyland. We had Adam Idah and Jason Knight involved so it was a great group and it’s brilliant to see where those lads have come from and where they’re heading. The Netherlands are always very strong at underage level so to go in and put in a really good performance and get a result against them is always massive.

What team or match from any era do you wish you could have coached?

I think the Napoli team in the late-80s or early-90s with Maradona would be the one for me. Since the Maradona film came out last year, I’ve watched it about seven or eight times and as a footballer Maradona was my favourite. My eight-year-old asks me all the time who my favourite footballer is and I always say Maradona – he can’t believe it’s not Messi or Ronaldo! Tactically he was a genius and understood the game, his technique, his dribbling, his finishing was fantastic. To be able to have coached him and a Napoli team that achieved great things going from where they were when Maradona arrived to ending up as league champions and UEFA Cup winners – that would have been a real pleasure.