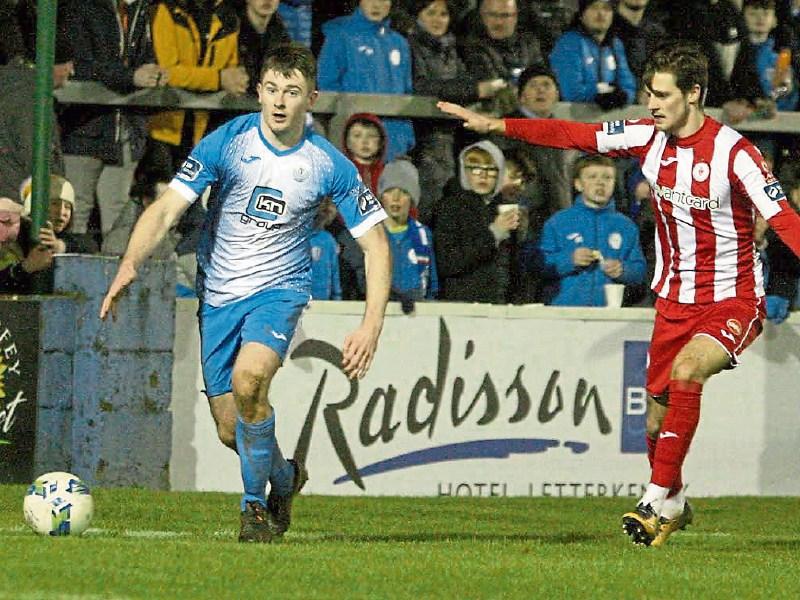 IF you spotted a guy doing a bit of training in Glin GAA Club grounds in recent times, chances are he may have been wearing a Finn Harps top.

Twenty year-old Karl O’Sullivan is back on home turf in West Limerick as the SSE Airtricity League Premier Division season has been halted due to the coronavirus.

O’Sullivan has taken up the opportunity to return home to Glin from Finn Harps base in Ballybofey, Co Donegal to sit out the Covid-19 pandemic which has paralysed the world of sport.

Talented striker O’Sullivan explained: “I have decided to move back to Glin. The last training session we had with Harps, the manager Ollie Horgan said for anyone who is not from Donegal to head away home because we don't know long the suspension in the league is going to last.

“I am back home in Glin at the moment, just trying to keep as fit as I can. It is tough. The gyms and everything are closed. You have to do your own bit.

“I have the local GAA pitch to do some training. It's only up the road from me.”

Sporting all-rounder O’Sullivan has a close affinity with Glin GAA Club. He has represented the ‘Magpies’ through the under-age grades and last December scored a crucial goal as Shannon Gaels, an amalgamation of Glin and Gerald Griffins, scored a thrilling County U21 ‘A’ football championship final success over the combination side Ballybricken/Bohermore/Fedamore at Mick Neville Park.

“I was playing U21 football in soccer’s off season before Christmas. We won the West Limerick and the County finals, so I continued to play.

“I played in a lot of different positions on the field, but full forward was the main one, I suppose.

“The whole reason I played U21 Gaelic football was for the fitness and stuff, keep me ticking over.

“I was hoping something was going to come up for me this season in terms of soccer (contract). The physicality of the Gaelic football helps toughen you up as well.”

In 2015 came the opportunity to play with Limerick FC U17s in the SSE Airtricity League. However, the 70km trek from Glin to Bruff, where Limerick were based was a difficult one to negotiate for the teenager.

“I came back to Glin after the Kerry U17s after the season ended. I then went to Limerick in January 2017.

“Tommy (Barrett) wanted to bring me in to the U19s set up.

“Physically I was well able for it after playing with Glin Rovers for the previous few months.”

O’Sullivan’s senior League of Ireland debut for Limerick FC arrived at the end of the 2017 Premier Division campaign away to Shamrock Rovers.

“At the end of the 2017 season, (manager) Neil McDonald brought me into the squad for the last day of the season against Shamrock Rovers. There was no pressure on for that game which was great.

“I ended up coming on in the second half, loved it. It was in Tallaght Stadium. I was 17 going on 18.

“I came on centre mid beside Bastien Hery and Shane Duggan. It was my first time in the set-up. Bastien and Duggy are probably two of the biggest players in the league, that was great.

“I made the run to set up a goal for Colm Walsh O'Loghlen. It was a good old night.”

Manager McDonald left at the end of the season to take up a role at Scunthorpe and he was replaced by Tommy Barrett.

“At the start I was coming on as a substitute in games. I was still at school. I wasn’t training full-time. I used to come into Limerick on a Thursday afternoon and go training with the squad.

“As soon as I finished my Leaving Cert I was in with Limerick full-time, travelling in from Glin every day, getting two buses to get there. I started making more appearances then as well because I was training full-time.

“We got relegated from the Premier Division at the end of the 2018 season which was very disappointing. That was a real pity. It was tough, obviously we lost a lot of professional players over the course of the season, but I still think with that team we should have done better.”

Limerick were back in the First Division in 2019, but as the season opened, O’Sullivan received an international call-up from U21 manager Stephen Kenny.

“Myself and Will Fitzgerald got a call-up in February 2019 from Stephen Kenny for the Republic of Ireland U21 squad.

“I hadn’t played any under-age football with Ireland before that. When I found out about the call-up, I was in a lecture in LIT (studying Business with Sports Management) at the time and my phone was going off the whole time. I was buzzing.

“We played the Rep of Ireland amateur side at Whitehall and won 1-0. Both myself and Will (Fitzgerald) made an appearance that night. It was great to get on the pitch and get the chance to wear the Ireland jersey.”

After a promising start to the 2019 First Division campaign, Limerick FC endured more than its share of struggles.

“I was part-time professional with Limerick last year. Starting off, everything was brilliant, pre-season was very good.

“Later the cracks started to appear. That was a pity. It was tough. At the end of the season, I didn’t know what I was going to do next. Things hadn't been great at Limerick in the end and there was the option of getting a move somewhere else.

“I was looking for a job as well. It was tough. I did get a job back home for a month or two to keep me going to keep the cash flowing.

“I had a couple of offers, they all seemed to come at once. The offer from Finn Harps came out of nowhere as well. It was very appealing to me. Ollie Horgan was in contact with me. He was just so honest, made me feel wanted and stuff. That is what you want. I am glad things worked out.

O’Sullivan, who played more than 50 senior games for Limerick in all, made an instant impact at Finn Harps when, scoring the winning goal in the season opener against Sligo Rovers.

“The buzz has been brilliant in Harps. They had made some very big signings, Barry McNamee coming from Derry, someone who has done so well in the league, it was brilliant to have him on board, the same with Shaun (Kelly), who was with me at Limerick and the likes of Shane McEleney.”

However, just four games in their campaign, the league has been halted due to the coronavirus pandemic. Last week the FAI and the National League Executive Committee set the weekend beginning June 19 as a target date for the resumption of the competition.

“This is the last thing anyone could have expected. But we have to get on with it. I just have to keep myself fit now while I'm back home.

“We’re all keeping an eye on things. I hope we can get back to normality again soon.”