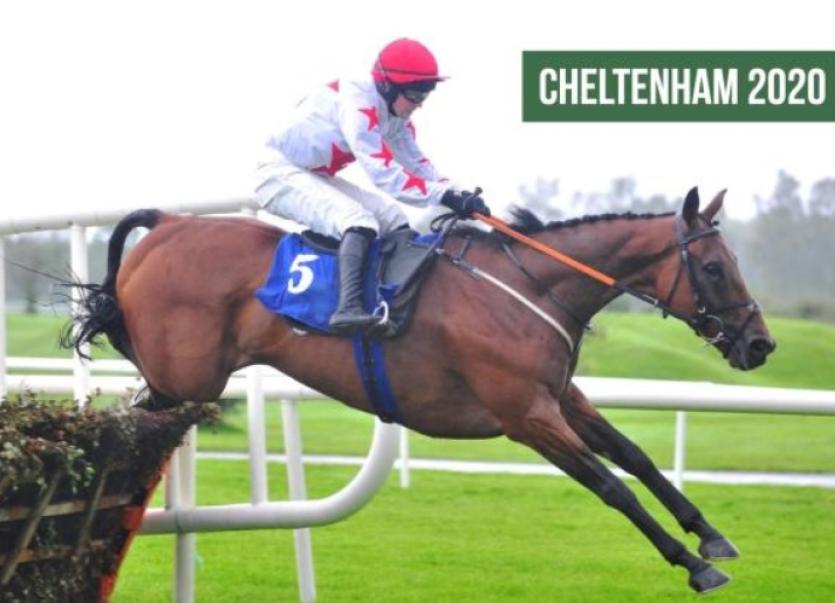 13:30 - EDWARDSTONE (16/1) - A couple of the Irish horses could be very good in this race with the likes of Abacadabras and Asterion Forlonge to the fore but I've gone for the eachway value. Edwardstone has won two of his three starts over hurdles and would have beaten Stolen Silver last time out had he not hung left on the run-in on appalling ground. He's seen to best effect on soft or good to soft and will benefit from a strong pace. The Supreme is often run at a frantic pace and that will play to his strengths. He'll be held up in fourth or fifth and could be staying on strongest up the hill. With bookmakers paying four and five places on the eachway market, this horse is tremendous value.

14:10 - FAKIR D'OUDARIES (4/1) - Course form is important at Cheltenham and that's why Fakir D'Oudaries, fourth in last year's Supreme Novice Hurdle, is getting the nod here. This race has been won by an Irish-trained horse in four of the last five years and we again dominate the market with Fakir D'Oudaries and Notebook of Henry De Bromhead's yard. Fakir D'Oudaries lost to that rival last time out but connections have admitted tactics were wrong that day. He also found himself short of room up the inside and was forced out. Nonetheless, he was only beaten a little over a length by Notebook. He saw out the hill well last year after a fast-run Supreme and is a Grade 1 winner over fences thanks to an incredible 22-length win in the Drinmore at Fairyhouse in December. This horse jumps well and will be ridden patiently for a strong finish. Expect him to be right in the frame as they hit the last.

14:50 - DISCORAMA (9/1) - Continuing the trend of course form being king at Cheltenham, this horse could be one of the best-handicapped of the week. Paul Nolan is a somewhat forgotten man in Irish racing but he has his string in good form and could land a couple of winners this week. This lad could be one of them, despite losing his last two races by a cumulative 78 lengths. He has had a wind operation since then and also has some serious form in the book. Looking at Cheltenham, he was second in the Martin Pipe in 2018 and looked all over the winner of the four-miler last year before given way to Le Breuil at the line. He has shaped as a proper staying chaser without really taking flight. He hasn't won a chase race since his first over fences at Naas back in November 2018, but don't hold that against him either. He was second to Delta Work, relegating Ryanair Chase favourite A Plus Tard to third in a Grade 1 at Punchestown last April and was just the lengths down on many people's idea of a winner this week, Champagne Classic, before his withdrawal. That run behind Delta Work is the best in the book and if he comes back to that form and laps up Cheltenham again, he could be powering up the hill in front come 3pm on Tuesday.

15:30 - DARVER STAR (12/1) - This would be somewhat of a fairytale for his Louth owners, but in a very open and relatively weak Champion Hurdle, this horse could outlast them all up the hill. While unlike a future champion winner, he picked up his first win in a handicap hurdle at Wexford in April last year after five unsuccessful trips to the track before that. He was rated 104 in that Wexford race but has had a meteoric rise since then. He's won four times in the intervening period, including a listed race in Limerick last October, but it is his performances in defeat in graded company that catch the eye most of all. After his fourth win on the spin, he went up against Ballymore favourite Envoi Allen at Fairyhouse in December. He was a 20/1 outsider but admirably finished just four lengths behind Envoi Allen. That was good enough form but may have been written off as a fluke if Darver Star didn't follow it up with something similar. He did just that and probably surpassed that display by running Honeysuckle very close at Leopardstown last month. He was slow enough to get into stride but after the last, he was gaining ground on Henry De Bromhead's star and market principle in the Mare's Hurdle all the way to the line. He was denied by half a length but beat the likes of Petit Mouchoir and Supasundae in the process.

16:10 - STORMY IRELAND (12/1) - I accept that this race is a match between Benie Des Dieux and Honeysuckle but the former is 8/11 and while I think she'll win, I'm going to the place market. As evidenced last year when Benie Des Dieux fell at the last while streaking clear, anything can happen in racing. If one or both of the top two in the market misfire, Stormy Ireland is best placed to pick up the pieces. She was second in this race last year and is evidently a better horse this term. She was runner-up on two occasions leading into last year's festival but has won three on the spin this winter. She won all three at her ease by a combined 15 lengths. She'll be staying better than most up the hill and could even spring a surprise on one of the big players. I'll be surprised if she's out of the first three home.

16:50 - LORD SCHNITZEL (40/1) - A race for an eachway bet so how about a 40/1 shot. Lord Schnitzel could land a shock here based off two decent runs in a form book littered with poor displays. He finished just three lengths behind Carefully Selected last November and finished ahead of the likes of Glenloe in a race won by Faugheen a couple of weeks earlier. This is his best trip ands while he deserves to be 40/1, he's capable of putting in a performance on his day. At a shorter price, Espoir De Guye (7/1) is a rapid improver with a nice profile.

17:30 - LORD DU MESNIL (8/1) - This notorious slog has been shortened somewhat this year but you still need a horse that stays all day to tackle the Cheltenham hill after running three and a half miles. Having finished second in a Grand National trial at Haydock last time out, Lord Du Mesnil fits that bill superbly. He is a distance specialist and has a top jockey on board in Sam Whaley-Cohen. Before that National trial, Lord Du Mesnil beat decent yardstick Perfect Candidate by nine lengths. He has won three times this season, improving on each occasion. Carefully Selected is the big gamble of this race for Willie Mullins but is prone to a mistake, a trait which could cost him over this gruelling trip at Cheltenham.