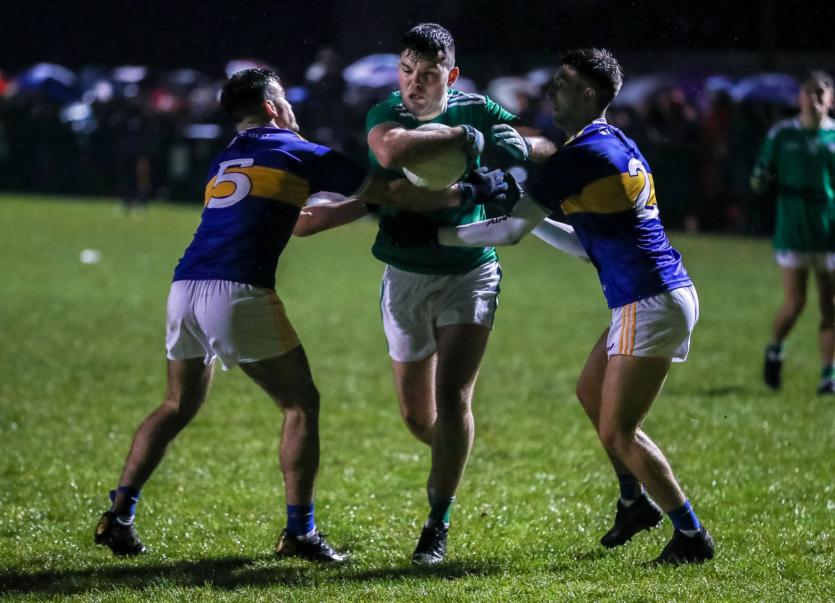 LIMERICK U20 football manager Jerry O'Sullivan has lauded his players for their dramatic Munster Championship victory over Tipperary.

"Our guys worked very hard tonight and I couldn’t be more proud of them," said O'Sullivan after the 0-7 to 0-6 injury time win on Wednesday evening in Mick Neville Park.

"It was touch and go there at the finish - Tipp came back and got level with a minute to go and we got the winning point a couple of minutes into injury time. It could have gone anyway - it was that type of game and conditions were tough," said O'Sullivan, who also guided Limerick to victory over Tipperary at this stage of the competition last year.

"I was in the Tipperary dressing room and I said that it was a credit to both sets of panels to be able and go out and perform and I would say for a neutral the game was exciting to watch. We are delighted that we are in a semi final again."

In a low-scoring affair, Limerick trailed 0-3 to 0-2 at half time but with Tipperary going 38-minutes without a score the men in green were 0-6 to 0-3 ahead entering the final 10-minutes.

"It was important," said O'Sullivan of a good start to the second half.

"We had played into the breeze in the first half and in the second half the one thing that we urged of the guys was to get a quick start to the second half and they did to be fair to them and we put on those four scores and that was the cushion for us for the rest of the game," he explained.

"Scores were hard to come by out there tonight," he added of a contest played in driving wind and rain.

In the end it was Rathkeale clubman Barry Coleman that kicked the 13th and final score of the night.

"Barry has moved back to the half back line this year but he was more of a half forward last year - he popped up and he has been scoring them in training and got a nice one tonight," said the manager of Coleman, who is in his third year playing Munster U20 Football Championship with Limerick.

Coleman, captain Adam Shanagher, James Cummins and James Molyneaux, John Hayes and Brian Foley all featured in the 2019 win over Tipperary and that experience was evident.

"It was great that our fellas shone through," said the manager.

He explained: "That experience is there and you can’t beat experience - we had four starting and maybe another five that were involved in the panel last year. It is great to have those fellas because they knew what to expect at championship level and they were telling the guys what to expect in terms of the ferocity of the tackle and how quick the game was going to move".

Limerick came into the Munster U20 Football Championship after suffering defeat to Clare, Wicklow and Offaly in the early season Liam Connor Cup.

"That Liam Connor Cup is not a competition to win, it’s a development competition and challenge games that you use to see what kind of panel you have. We wanted to give everyone a fair chance and we were changing and mixing teams around and I didn’t worry too much about results because the result that mattered was tonight - a first round of the championship at home and to win that was all that bothered me," said the Limerick manager.