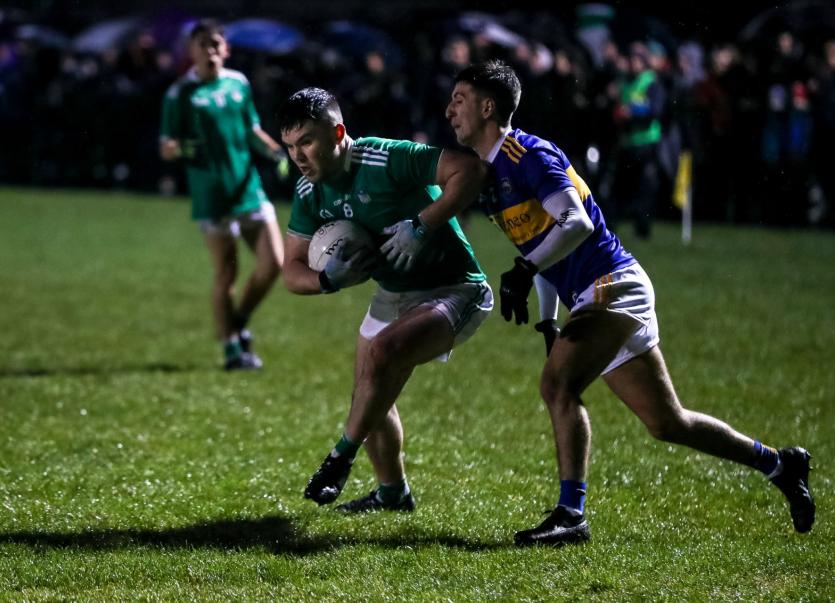 LIMERICK found an injury time winning point to defeat Tipperary in the Munster U20 Football Championship this Wednesday evening.

In a rain-soaked Mick Neville Park in Rathkeale it finished Limerick 0-7 Tipperary 0-6 with local man Barry Coleman kicking the winning score in the third minute of injury time.

The Jerry O'Sullivan managed Limerick now play Kerry in the provincial semi final next Wednesday February 26 at a Limerick venue.

This quarter final was transferred early in the day from the LIT Gaelic Grounds and while the weather conditions were anything but helpful to the players and uncovered spectators, the playing surface was quite good.

Limerick played against the breeze and rain in the opening half but a strong defensive showing ensured that Tipperary were only 0-3 to 0-2 ahead at half time.

Two of the Tipperary scores came in the opening five minutes and after this Limerick settled down to dominate at times.

James Cummins had the first Limerick score in the 11th minute to leave the score 0-2 to 0-1.

When Eoin O'Mahony pointed from a mark it was 0-3 to 0-2 and the game was at the mid-point of the first half. But there wasn't to be another score in the half, in which Limerick had five wides and Tipperary one.

On the change of ends, it took Tipperary 22-minutes to score. By that point Limerick had four points scored to lead 0-6 to 0-3 inside the final 10-minutes.

But back came Tipperary to level up the contest for just the second time in the game's 58th minute.

Limerick were then reduced to 14 men with a red card for substitute Bryan Nix but with extra time looking a possibility it fell to wing back Barry Coleman to kick the winning point and repeat the victory over the Tom McGlinchey managed Tipperary side just like last year.