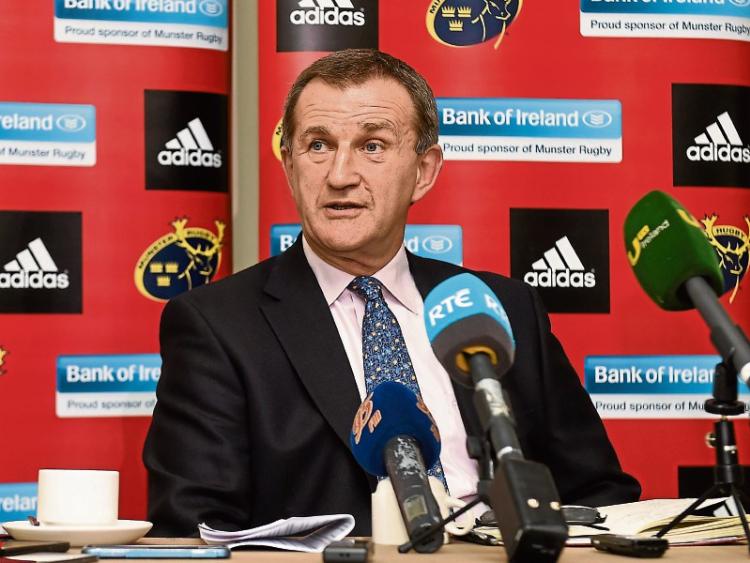 Fitzgerald, who retired last June after spending 20 years in the top role, also says that in a much-changed society, many talented young sports people are finding it hard to accept just how hard they have to work to be successful and in some cases are opting not to pursue their ambition of becoming a professional player.

What are the biggest challenges facing Munster right now?

“Population, whether you like it or not, there is a huge amount of excellent work being done, a lot of good young players, population and keeping our players at home, whether its for university courses or for employment, it is harder to compete with population size and everything like that.

“If you look at it, we are still not doing enough for our young players. It can improve, it has improved an awful lot.

“No one knows the strength and the financial muscle that we are up against in some areas. I take my hat off to Leinster, they have done an exceptionally good job, but they have the population, I suppose, in terms they have the economic wealth and they have a schools' structure that is driven by that, that is producing great players.

“Our players are very comparable in my opinion, and better in some situations, but it is just a volume issue that is the biggest challenge in our province really. We don't have the population and a lot of our rugby playing population unfortunately are having to emigrate or go to third level institutes.

“The secret for us going forward will be to produce our own players and not try and compete on the world market with people where we don't have the funds to do that.

“An awful lot depends too on what the young players themselves want, how ambitious they are, do they want instant success, do they want their photograph on the paper, that is a challenge for every walk of life today.

“The ambition always is that you have all home grown players, the reality of that happening in the current world are challenging, 100%, and I think society is changing in such a way that a lot of young men today have decided they don't want to be professional rugby players, they enjoy their game of rugby, but they want to be a doctor, a dentist, a scientist, an IT person, they are all the challenges that sport have to make.”

Do you think the naming rights on Thomond Park will be sold?

GF: “If you look at the number of naming rights contracts that have happened in this country over the past number of years they are minimal. The obvious one is Kingspan Stadium in Belfast.

“That naming rights was taken by a person who was already an existing sponsor with the province for many, many years who has been hugely supportive of them and wanted to do more to help them, so the opportunity arose that way.

“A lot of small naming right situations have happened in other sports and other facilities across the country for minimal fees.

“In Thomond Park it was part of the finance model day one to do it. We managed to get the place built without that happening. I am out of the loop now, so I am only speaking personally, if the right candidate arrived in the morning, with the right brand who had a genuine interest in doing it, it is a no-brainer to do it.

“The benefits that people get out of naming rights need to be looked at as well, so if you are going to have corporations that are going to spend money, there probably needs to be a very close local connection for someone working in them to see the benefits of it and everything else.

“There is a lot talked about it. Look, the stadium got built, the training centre got built, there is huge changes every week in Thomond Park. There is new media facilities, two new bars, supporter club bars, so it hasn't prevented progress, that is the key issue.

“If it happens and it comes and the right partner appears it will be great and it will be good for everyone, but the most important thing is that, as I said at the start, that we have the right people and if some brand turns up that wants to sponsor it and someone within our organisation decides it is not an ideal partnership that is the right decision then as well.

“If you look at the number of naming rights, things that have happened in Ireland over the past number of years outside of Kingspan Stadium in our sport, Energia went into Donnybrook.

“It's probably a no-brainer with the traffic and the population passing Donnybrook, I'd say that is an easy sell, compared to what we would be trying to sell for signage and naming rights and passing (traffic) at Thomond Park.

“The market place dictates an awful lot, but the great thing from my point of view is that we have continued progress with facilities and there is still more work and plans, because I have always driven that outside of players, the next most important thing is facilities. You need facilties to keep and entice your young players.”

What impact has the decision to move to a single training base at UL had since it opened?

GF: “It has been a huge assistance, it is a big benefit. The young players are benefiting much more. It immediately sets standard for what is required and expected of them.

“It sets a standard for us trying to attract foreign coaches and foreign players. It has been much commented on that it is as good a facility as they have seen.