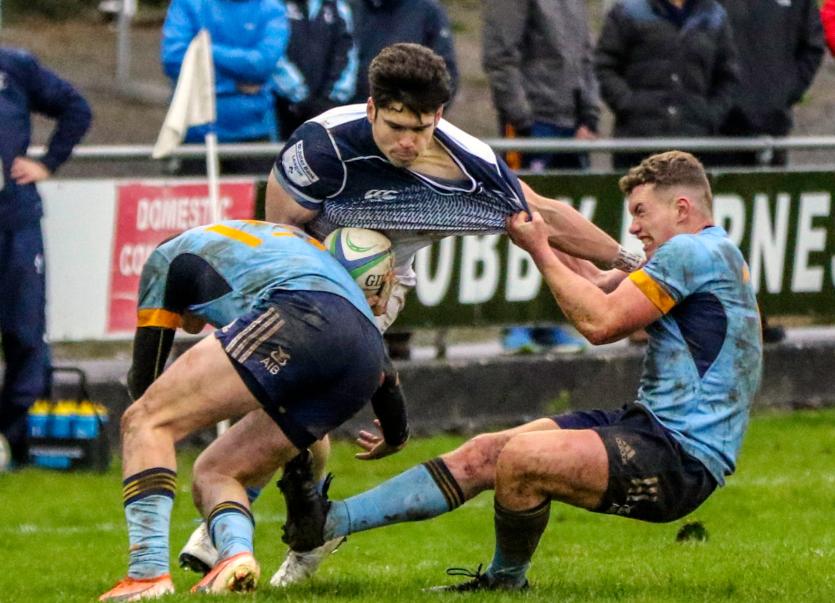 Garryowen winger Alex Wootton, who scored a brace of tries, looks to get past the UCD defence during the energia All-Ireland League Division 1A tie at Dooradoyle on Saturday Pic: Kieran Ryan-Benson

THERE were four Limerick wins on a dramatic afternoon of energia All-Ireland League action this Saturday as the competition resumed following the Christmas and New Year's break.

In Division 1A, second-placed Garryowen boosted their top four play-off hopes after securing a convincing 40-14 bonus point win over UCD at Dooradoyle.

The win sees Garryowen move five points clear of third-placed UCD in the battle to secure a play-off place. The Dooradoyle side are now also 10 points clear of fifth-placed Clontarf.

Also in the top flight, Young Munster fell to their third defeat to Cork Constitution in recent weeks when the All-Ireland League holders recorded an 18-3 success over the Greenfields side in their latest meeting at Temple Hill.

The defeat sees Munsters' remain in seventh place in the table, just three points clear of the three sides directly below them in the top flight table.

Munsters' had lost narrowly to Cork Con at Greenfields in their previous AIL outing in December, while the Leesiders also came out on top when the sides renewed rivalry in the Munster Senior Cup final at Musgrave Park just before Christmas.

Meanwhile, in Division 1B, Shannon scored an emphatic 31-13 bonus point victory over high-flying Highfield on Thomond Park's back pitch to boost their promotion play-off hopes.

The Parish side sit in fifth place in the table, just a single point behind third-placed Old Belvedere and fourth-placed Banbridge.

Highfield had only lost one of their previous nine league games prior to Christmas and defeated Shannon by nine points in Cork last month.

In Division 2A, Old Crescent maintained their strong promotion play-off push when edging past Buccaneers 12-10 at Dubarry Park on Saturday afternoon.

The victory sees Matt Brown's side move up to third place in the table, now just one point behind second-placed Rainey Old Boys with eight rounds of regular season fixtures to go.

UL-Bohs' third win of the campaign has greatly eased the Red, Red Robins relegation worries as the Annacotty side now sit in a more comfortable seventh place in the table, a full eight points clear of the relegation play-off position.

Finally, in Division 2C, Bruff suffered a frustrating 13-3 defeat to Tullamore in Spollanstown. The loss has seen Bruff drop into ninth-place in the table, level on points with seventh-placed City of Derry and Bangor in eighth. Bruff have a five point cushion over basement side Midleton.

In Division 1A, Garryowen, who lost 25-24 to UCD in their previous meeting in December got back to winning ways with a clinical display in Dooradoyle.

The Light Blues, who led 20-7 had first half tries from Diarmuid Barron, Munster winger Alex Wootton and winger Liam Coombes, while Dave McCarthy added five points with the boot.

In Cork, Young Munster came away from their third meeting with AIL holders Cork Con in a month empty handed after suffering a frustrating 15-point defeat.

Munsters' trailed 0-8 at the end of a hard fought opening half played in wet conditions. The Limerick side was outscored 10-3 in the second half, with Evan Cusack landing a penalty goal for the visitors.

Next up for Munsters' is a crucial home date with basement side Ballynahinch at Tom Clifford Park on Saturday, January 25.

In Division 1B, Shannon will be pleased to have avenged their nine-point away defeat to Highfield in Cork in December.

Highfield had only lost one of their nine previous AIL games this season prior to kick-off on Thomond Park's back pitch.

Shannon led 17-10 at half-time in the wet conditions, thanks to two tries from Jamie McGarry and Eathon Moloney, while the exciting Jake Flannery added seven points with the boot.

A second try from full-back McGarry on 56 minutes, which was also converted, pushed the Parish side's lead out to 24-13.

McGarry turned provider for Shannon's bonus point try on 75 minutes when he got the ball out to Ikem Ugwueru to dot down in the corner. Replacement John Bateman added the extras superbly from the touchline.

In Division 2A, newly crowned Limerick Charity Cup champions Old Crescent completed a home and away double over Buccaneers when edging to a 12-10 success at Dubarry Park.

All the scores in this game came in the opening half. Promotion chasing Old Crescent, who trailed 5-10 after 30 minutes, scored two vital tries to secure victory and maintain their promotion push.

Lorcan Kavanagh and an intercept try from the in-form Val McDermott proved key for Crescent in this precious success, while Maccon Casserly also added one conversion.

Also in 2A, UL-Bohemian will take plenty of positives from their hard fought four-point victory over fifth-placed Cashel.

UL-Bohs rallied from trailing 14-24 after an hour to secure a welcome success.

The Red, Red Robins scored two first half tries through Darragh O'Grady, on 15 minutes and again on 30 minutes, with Harry Byrne converting both to ensure the sides were tied 14-14 at half-time.

After falling those seven points in arrears to their visitors, UL-Bohs rallied strongly with tries from Alan Kiely and the bonus point try from Jamie McNamara to turn the game round. Crucially Byrne managed to convert both to seal an excellent win for the home side.

Meanwhile, Bruff left themselves to face an uphill battle in the second half when trailing 0-10 to third-placed Tullamore at Spollanstown.

The Limerick side, who have had their fair share of injuries this season, did manage a second half penalty from Andrew O'Byrne. However, the Kilballyowen Park side was unable to hit back for a losing bonus point over the remainder of the game.

Next up for Bruff is a crucial home game with mid-table Clonmel on Saturday, January 25.