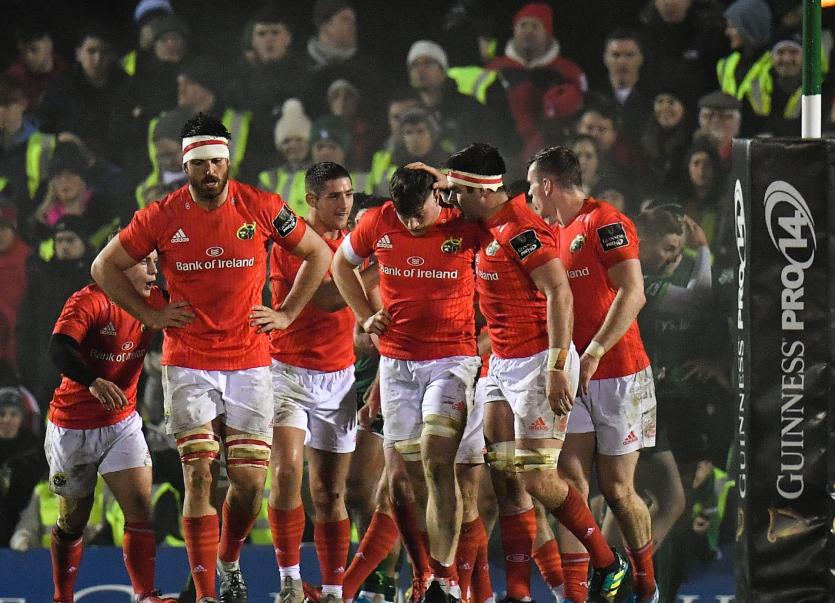 Munster's Jack O'Donoghue, centre, is congratulated by team-mate Billy Holland after scoring his side's first half try against Connacht in the Guinness Pro14 at the Sportsground in Galway on Saturday

RESILIENT Munster cemented top spot in Conference B of the Guinness Pro 14 with a hard fought 19-14 victory over a gritty Connacht side in front of a 8,129 sell-out crowd at the Sportsground in Galway on Saturday evening.

A close range first half try from substitute Jack O'Donoghue proved the crucial score of this fiercely intense derby clash.

This was a precious and significant win for Munster as Connacht had lost just once at home since January in all competitions, a defeat to Leinster in Round 6.

Munster went in front in the eighth minute when out-half JJ Hanrahan landed a penalty goal after Connacht were penalised at the breakdown. The home support was unhappy about the decision as they felt scrum-half Caolin Blade had been tackled high by Munster flanker Gavin Coombes.

Connacht, who shaded the possession stats during the opening 15 minutes, drew level when Munster infringed at the breakdown and their 22-year-old out-half Conor Fitzgerald landed an excellent penalty with his trusty left boot.

Munster, who made 10 changes to their starting line-up from the one which lost to Saracens a week ago in the Heineken Champions Cup, regained the lead five minutes later when Man of the Match Hanrahan landed his second penalty of the night after Tom Daly was penalised for a high tackle.

Jack O'Donoghue crossing the line for the first try of the game. @Munsterrugby v @connachtrugby pic.twitter.com/h1YTwmc5ME

The visitors crossed for the game's opening try in the 25th minute when replacement Jack O'Donoghue barged over from close range after the Munster forwards used the pick-and-go to great effect.

Hanrahan kicked the straight forward conversion for a 13-3 lead for the visitors.

The see-saw nature of the scroing continued when former Munster player Fitzgerald kicked the home side back to within seven points of their local rivals at 6-13 with a 29th minute penalty.

Hanrahan then restored Munster's 10-point advantage with his third penalty of the evening as the home side was pinged for the fourth time in the game.

It's been a hotly-contested opening 40 in Galway

Munster created a second try-scoring opportunity in the 35th minute when full-back Shane Daly made an excellent break up the middle of the pitch, but the ball was knocked on as he tried to link up with right winger Calvin Nash who was up in support.

Resilient Connacht, roared on by their large vocal home support, closed to within a score of Munster at half-time, 9-16, when former Limerick minor hurler Fitzgerald converted his third penalty goal of the evening.

Visitors Munster made the ideal start to the second half when Connacht were penalised for not releasing and Hanrahan duly split the uprights from inside the Connacht '22 for 19-9.

Munster survived a real scare in the 63rd minute when Kyle Godwin made a terrfic break up the middle of the pitch, but instead of passing to Blade who was in support, the winger opted to chip ahead. Munster scrambled back in defence and managed to win a penalty on the ground, much to the annoyance of the vocal home support.

Connacht did have every reason to cheer in eight minutes from full time when substitute Conor Carty touched down superbly in the right corner to leave five points between the teams.

However, a composed Munster side finished the game strongly to thwart the home side's hopes of staging a dramatic comeback.

It was a proud occasion for Limerick's Ardscoil Ris as past pupil Casey made his first start at this level, while another North Circular Road schoolboy Dave Kilcoyne started his first game this season for visitors.

In the home corner, former Ardscoil Ris Schools Cup star Conor Fitzgerald started the game at 10 for Connacht, with his brother Stephen a second half replacement in the game.

Next up for Munster is the marquee Guinness Pro 14 fixture with Leinster at a sold-out Thomond Park on Saturday. December 28, 6pm.