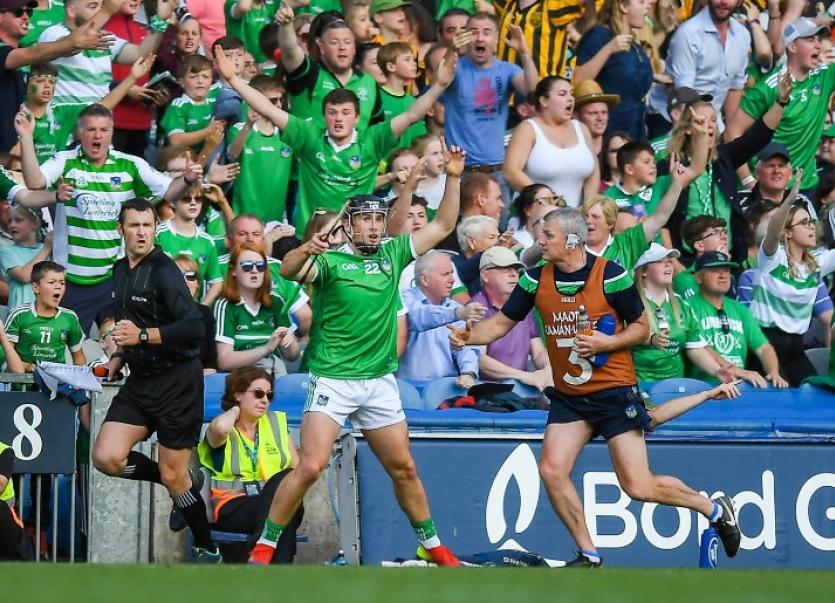 LIMERICK GAA’s Annual Convention is to vote on a motion to extend the powers of the referee to include more video technology in an attempt to eradicate incorrect decisions.

The motion is a fall-out from the closing stages of Limerick’s All-Ireland SHC semi final defeat to Kilkenny last Summer, when John Kiely’s hurlers appeared to be denied a chance to equalise from a late ‘65.

In a Limerick Leader interview in the aftermath of the loss to Kilkenny, Limerick GAA chairman John Cregan said rather than objecting to the result he would prefer to "try ensure this does not happen again".

Now Cregan and his Limerick GAA officials have officially begun the process of attempting to bring about a rule change.

The new Limerick proposal would see each team with at least two requests per game to question the decision of an official.

If the clubs of county give their backing to the motion, produced by the County Board executive, then Limerick GAA officials will hope to get the motion debated at the next GAA Annual Congress.

The Limerick motion will look at add a paragraph to the rule on the powers of the referee.

‘That the referee shall also have power to consult the Hawk-Eye Score Detection System/Match Official on his own volition or following a request from either of the two competing managers or team captains to clarify if any of the team of officials erred in making a decision in relation to the validity of a score or the awarding of a free/sideline ball/ wide/ 45 or 65 or a square infringement. This to be limited to two failed requests per team per game. Where a request is deemed successful a team retains its right to make a further request. All such requests from managers or team captains must be with the referee (from the captain) or fourth official (from the manager) before the play resumes.’

Limerick GAA secretary Mike O’Riordan referenced the closing stages of the Kilkenny semi final in his report to next Monday's Annual Convention in the Woodlands House Hotel.

“The closing stages in this game was hugely disappointing, with the officials failing to acknowledge the potential of a free or ‘65 entering the dying stages of the game. Given the technology that is available, I believe the powers that be should invest in same to eradicate human error as much as possible. The investment of time and finance into teams requires these advances at the minimum,” said O’Riordan.

Elsewhere in his report, the Limerick GAA secretary has called for a return to the U18 and U21 age grades at inter-county level.

“The ongoing issue of Age Grades has not been concluded even though it will probably feature on the Clar at Congress. I feel counties should have the option to retain their respective age grades within their county if they so wish. If U19 Age Grade comes in February replacing U17 and U20 grades, it will leave a massive void between U19 and Senior,” said O’Riordan.

”I would prefer to see the Age Grades returned to U18 and U21 with minors prevented from playing adult level with their clubs. This I think would afford players in their late 20s or early 30s of playing an addition year or two prior to being cast aside for the next club star player,” said the secretary.

Closer to home, the secretary confirms that changes are afoot on the club scene in Limerick in 2020.

A club championship review took place in November and a lot of topics came up for discussion,” reports O’Riordan.

”Junior hurling clubs were afforded the opportunity to discussed with their clubs the structure for the County Junior A Hurling Championship for 2020. The vast majority of clubs returned a consensus that the championship should be ran on an All-County basis for 2020. This will be discussed further with the new CCC in late December/early January,” he said.

“The County U21 and minor hurling and football championships will be All-County next season,” he confirmed.

“The County Hurling Leagues are going to be restructured in 2020 with the current format being replaced with a County Senior, Intermediate & Junior Leagues next season. The Football Leagues will remain the same.”

He explained: “The number of walkovers in the County League is totally unacceptable and in 2020 there will be a new structure in the County Hurling Leagues with two less rounds following discussion with the clubs at our end of season review. The Football Leagues will remain the same for 2020.”

“The consensus is that the club championships are working reasonably well. The gap between the early rounds in the senior and intermediate hurling and football is still too wide. Unfortunately given the number of rounds in the present championships it is necessary to commence games in April. It also gives an element of certainty to clubs and players when the dates are firmed up,” said O’Riordan in his end of year report.