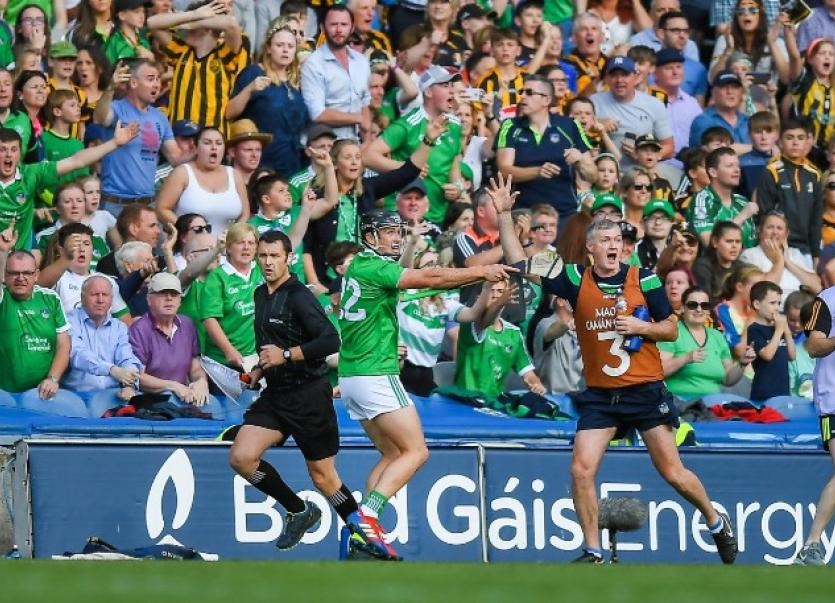 LIMERICK GAA officials have made contact with Croke Park to express "disappointment, frustration and dissatisfaction" but wont be lodging an objection to the result of the All-Ireland SHC semi final against Kilkenny.

Brian Cody's side dethroned Limerick by a single point but the game ended amid drama with a last gasp Daragh O'Donovan lineball waved wide rather than a '65.

Limerick GAA chairman John Cregan has confirmed to the Limerick Leader that contact was made with Croke Park officials this Monday on the incident.

"It was deeply disappointing and hugely frustrating from everyone’s point of view in Limerick for something like that to happen," said John Cregan.

"We came up a bit short on the day and when you are beaten it is always disappointing, but when there is an issue attached it makes it more disappointing with a lot of what-ifs - what if we got the ‘65 and what if we scored the ‘65 and those questions are up in the air now and will remain unanswered," outlined the GAA chairman.

He added: "It’s worth mentioning that the incident was brought to the attention of the referee and the linesman before the last play by one of our sideline officials and by one or two players but he didn’t respond in a positive manner and blew the final whistle and once the final whistle is blown its very difficult to change anything.

"You can go down the road of objections and we have been there before when we have seen pretty major instances taking place in games and at the end of the day the result stands," said Cregan.

"We have expressed deep disappointment, frustration and dissatisfaction at official level between the County Board and Croke Park and it is my intention to pursue the matter further by way of trying to ensure that the officials that are put in place for such games have adequate experience to deal with such issues. We need to see the respect given to the players that they deserve by way of ensuring that top experienced officials are put in charge of these games. By the way a more experienced official could always make a wrong call as well but you lessen the chance of that happening."

The chairman stressed: "We have expressed our deep disappointment to Croke Park on the issue".

"What can we do to try ensure this does not happen again. We have been down the road of lodging an objection, as have several others, but once the referee blows the final whistle that is it while it is deeply deeply disappointing," sighed Cregan.

"While there is deep frustration that I absolutely understand, I believe we now have to get on with it now and put all our resources into getting back there and make every effort to win again. At the end of the day Tipperary and Kilkenny are in the All-Ireland final and I wish them well."