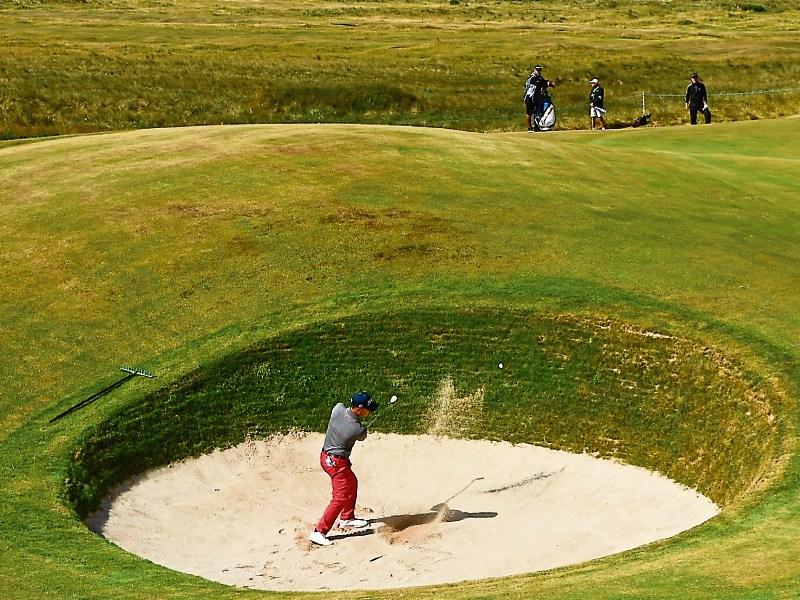 GOLFER'S expectations drive up spending. It might surprise golfers to learn there are some courses that spend as much per square foot on bunkers as they do on greens.

The more time devoted to bunker maintenance, the less is available for other tasks; improving greens, approaches, and fairways. Time that would be better spent nursing weak areas back to full health.

On the pro tours, bunkers are so manicured they could hardly be seen as hazards at all. Not only that but they all play the same regardless of location. Is it any wonder pros are so good playing out of them?

For amateurs, though, no two bunkers seem alike even when they are beside the same green on the same golf course. If you are a pro, every shot from a bunker is followed by a raking routine that must be carried out to perfection by a volunteer (usually a professional greens keeper) otherwise there will be 'murder'.

The humble amateur isn't so lucky! One of the new rules introduced last January is revolutionary but I haven't seen anybody take advantage of it yet i.e. dropping out of a bunker for a two stroke penalty.

If only some golfers had the humility and presence of mind to drop out, fewer scorecards would be ruined. While I never worry about the overreactions of top pros to adversity, I am concerned that the humble amateur is at a disadvantage. Every bunker on every course seems to have varying amounts of sand with different consistencies.

Knowing how much sand is 'under' the ball is vital to playing a good bunker recovery. Too often balls are found in depressions, footprints and scrapes left by other golfers, roaming or burrowing animals.

A ball found in the mess left by a roaming dog or an ignorant golfer has only one chance of coming out - in your hand! I believe it has reached the stage when a golfer hits his ball into a bunker, he should be allowed to mark it and 'prepare' the sand by using his foot or club (not his hand); place it back where it was and play it - without penalty with the option to drop out for a two stroke penalty remaining in place for beginners and hopeless cases.

In my view, this would go some way towards equalising what professionals face on a daily basis. Bad bunker lies on the pro circuit are rare whereas 'good lies' are the exception rather than the rule in club golf.

One of the advantages is maintenance staff will have a simpler and less frequently occurring task of caring for bunkers (thus saving money) The club won't have the expense of purchasing rakes.

Golfers who care about such matters won't have to worry about whether to leave the rake in the bunker or outside it after they make their stroke.

Golfers wouldn't have to be so diligent about raking over their own footprints after a long walk through the sand, which would also speed up play.

Anybody agree? In no time at all, club golfers will see a dramatic improvement in their bunker play because once you know how and have confidence it is not that difficult a task. I am convinced that this proposal for bunker play would be embraced by every amateur in the land.

Two graduates from this competition structure, East Clare’s Tara Whelan and Shane Lillis from Kilrush gained college scholarships in the USA. Tara completed her college degree and is now an assistant Professional in Florida. Shane has just started his stint in Tennessee.

Other notables to come through the Clare County Golf structure Paul O’Neill, the assistant professional at Shannon golf club and Shane O’Sullivan who is now working for Callaway Golf, Danny Brennan who reached the second stage of qualifying for a European Tour card only last week.

Ciara Magill and Lisa O’Shea were key members of the 2012 Munster girls team that won the Inter Pro championship; Jonathan Keane is a boys international and Munster (Under 18) player of the year in 2018. Clare Junior Golf has come a long way.

Supporting and improving the golf experience for all of the junior golfers in County Clare is the aim but it requires adult support and sponsorship. Claregolf.ie is staging a Christmas Scramble in Dromoland Castle on December 7. Full information at www.claregolf.ie

All these juniors have come through structured junior sections in their home clubs. The Munster Branch GUI has selected four players from Clare for provincial training in 2020: Tom Clancy, Ronan Herbert, Jack Clohessy and Eoin Magill.

A festering grievance can work wonders in a golf match