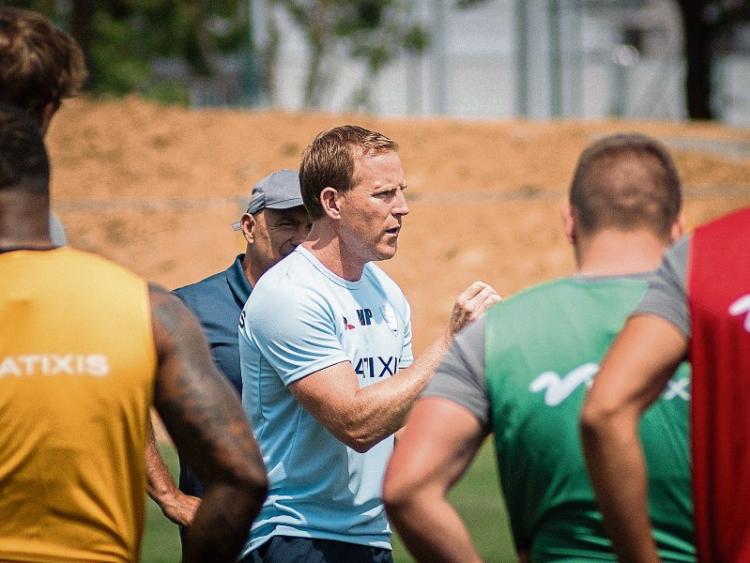 RACING 92 backs and attack coach Mike Prendergast admits his return to Thomond Park this Saturday will be an emotional and ‘special occasion.’

French Top 14 giants Racing 92, who include former Thomond Park favourites Donnacha Ryan and Simon Zebo in their playing squad take on Munster in a crucial Round 2 Heineken Champions Cup fixture on Saturday, 5.30pm.

The 42-year-old has been coaching in France since 2013 when he went to Grenoble, having stints with  Oyonnax and Stade before his switch to Racing.

While Prendergast played against Munster at Thomond Park for French side Bourgoin in a Heineken Champions Cup game in October 2006, Saturday will be his first time back at the venue in a coaching capacity with a visiting team in a competitive fixture.

Looking ahead to Saturday’s Pool 4 clash of the table toppers, Prendergast told Leader Sport from Paris: “Saturday will be emotional. It will be a great occasion. Obviously it is different when you are out on the pitch and you are playing. Nothing beats that adrenaline.

“I suppose the next best thing to playing is as a coach. Going back to Thomond Park is probably the most special place to go.

“It is somewhere I grew up as a young kid watching games, watching the big AIL games, then playing there in AIL games. I was fortunate enough to go on and play with Munster in big games there.

“To go back there as a coach now is quite special and I am really looking forward to it.

“For Donnacha (Ryan) and Simon (Zebo) as well, it is going to very special for those two lads who gave years and years of service to Munster.

“For us as a team it will be a huge challenge. We have been speaking about it as a group, about what a special place it is to go.

“I have always said it in my years away as a player and as a coach, the Munster brand and Munster Rugby is world renowned, it’s a massive name over in France.

“The respect is massive there. As a Munster person to see that, it is a satisfying thing.”

Munster and Racing 92 are locked on five points each after the opening fixtures. While Munster scored a dramatic last gasp bonus point win over the Ospreys at the Liberty Stadium, Racing claimed a five-point haul against Saracens at the U Arena.

Meanwhile, Munster scrum-half Alby Mathewson says he is fortunate to have played for such a 'world class and historical club'.

Munster confirmed this week that New Zealand scrum-half Mathewson is to bid farewell to the province after 15 months this Saturday.

Mathewson Tweeted: “Love my team mates and will miss them a lot. Thanks Limerick for having me. To all the supporters you guys are unreal.”