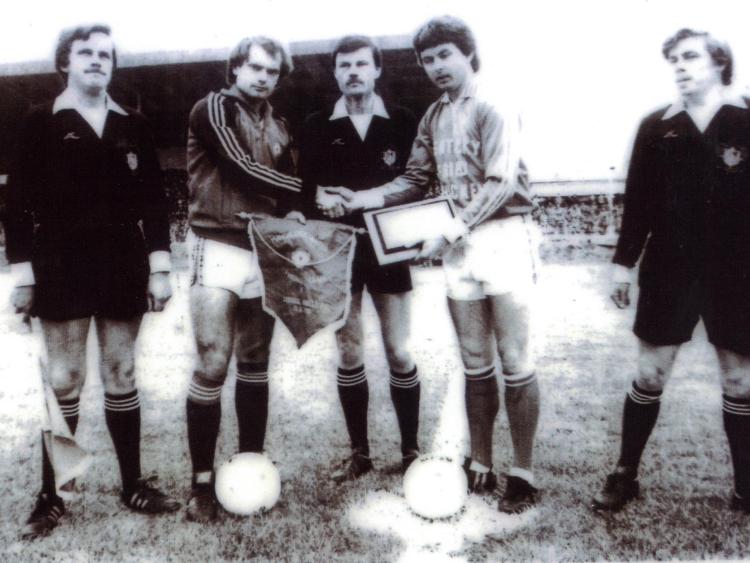 A STAR-STUDDED Manchester Utd side visited Limerick 37 years ago to play in Pat Nolan's glamour testimonial game at the Markets Field.

United were the third high profile English league side to visit Limerick in the space of just over a year following Tottenham Hotspur and Southampton.

The game with the Red Devils was organised through Limerick manager's Eoin Hand's friendship with United boss Atkinson and it is estimated that it cost £15,000 to stage. Several members of the Man Utd squad relaxed ahead of the game by playing golf in Limerick.

A crowd of more than 5,000 turned out to watch the contest.

Manchester United took control of the game inside the opening quarter to lead 2-0. The opening goal was scored in the 15th minute when Lou Macari glided his way past two defenders and into the penalty area and the in-rushing Kevin Moran came thundering in to blast the ball to the net.

Limerick didn't even have time to regroup themselves when the Red Devils struck again. Bryan Robson intercepted a back pass and shot to the net.

Limerick did put a few moves of note together when then Ireland rugby international Tony Ward made a few exciting runs down the flanks, but the Blues created little by way of clear cut scoring chances.

Limerick boss Eoin hand gave gametime to new signings Miah Dennehy, Liam Keane and Liam Murphy in the second half. Dennehy set up a chance for Tony Morris, but he shot narrowly wide.

Robson added his second goal of the evening to make it 3-0 for the visitors, before Limerick netted in the final minute through a Joe O'Mahony penalty.