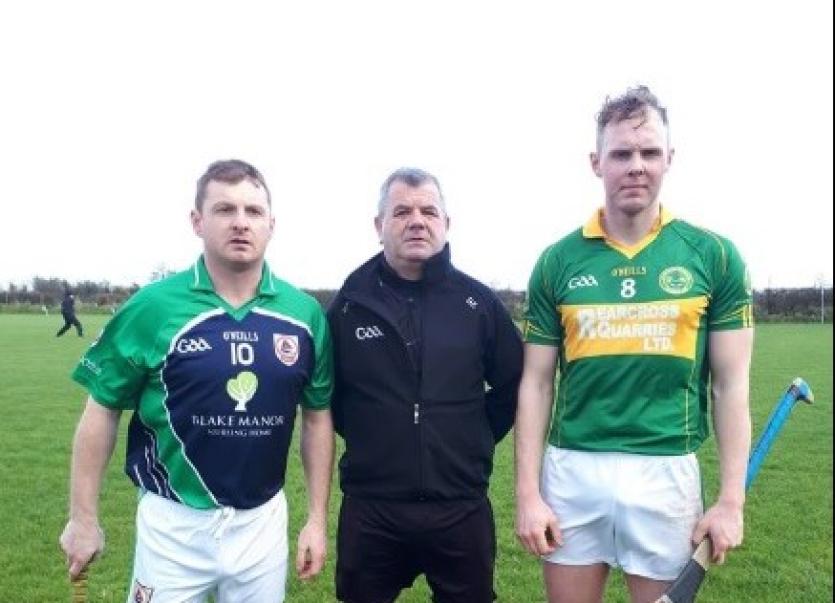 Cappamore will play in the All-Ireland final on February 9

Holding out through three hectic minutes of injury time, Cappamore qualified for the All-Ireland junior B final in Killeedy as Galway champions Ballindereen failed to turn a late rally into a draw.

However, while the margin of victory was just a single point, Limerick’s finest deserved every inch of their victory as they showed the greater composure throughout as entertaining a game of hurling you’ll ever come across in the depths of winter.

While the Connachtmen may have enjoyed a better spread of technique through the lineup, they never imposed their will on their opponents who built up a seven-point lead by the break on the back of Liam Creamer’s free-taking and whose defence, inspired by centre-back Jack Sheehan, soaked up whatever was thrown at them as the wind and the rain picked up after half-time. They looked to be comfortably in control until sub Seán Corcoran struck the game’s only goal as watch moved past the hour but they kept their nerve and never lost their
composure.

Donal O’Mahony got Cappamore off the mark within seconds but, despite Sheehan following up, Ballindereen dominated the early possession. Howerer, they stuggled to find their inside men against the stiff
breeze and, after failing to convert the first two, Aidan Duffy opened their account off their third free.

Once the Limerick champions steadied themselves up the middle, delivered were directed into Éamonn Moloney who was denied two chances of goal. However, the pressure drew the fouls and Creamer sent three between the posts before Jack Walsh added one from play.

When the Tribesmen lifted the siege, Duffy punished two fouls but Cappamore picked it up again and drew the fouls coming up to the break. Another four frees from Creamer, the third from over 100 metres, stretched their lead to 0-10 to 0-3.

Duffy sent over a free on the restart but the Galway club missed chances to draw closer after their first score from play from Pádraig Lafferty was met by Creamer’s free. Gavin Duffy hit back with a free from half-way but the Slieve Felim defence was holding tight, Conor O’Brien pounced on a scramble to point and the Western fightback didn’t resume until Keith Carr’s free was followed by Corcoran.

But the clock was running down and Walsh moved the gap back to five where it returned after Alan Martyn and Matthew Ryan swapped scores. When Duffy struck from distance off an injury-time solo run, Ballindereen threw everyone forward and got their reward when Corcoran whipped to the net off a scramble but heroic Cappamore defending held them at bay as they searched for the equalizer.