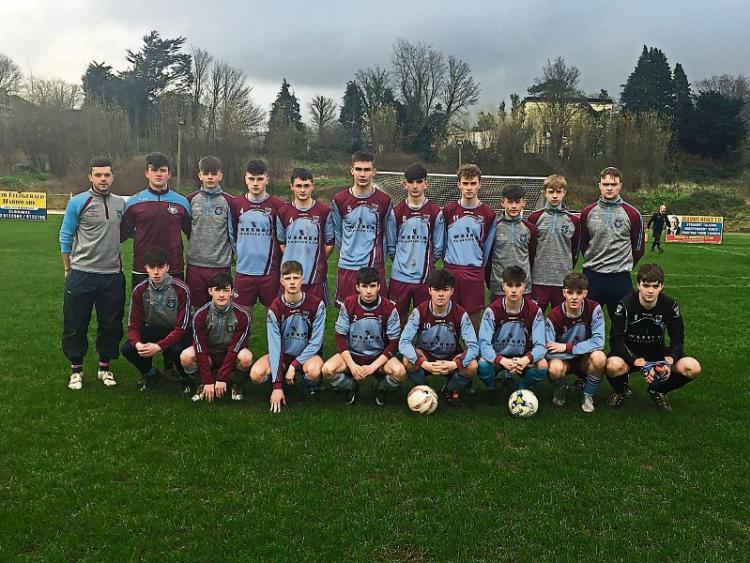 Broadford United staged a fantastic comeback in the 4th round of the Munster Youths Cup as they came from 2-0 down after 20 minutes to win 4-2 away to Clonmel Town, winners of the competition in 2015 and 2016.

Goals from Colm Ryan, Kieran O’Flynn and a headed brace from James Molyneaux ensured that Broadford progress to the quarter-finals, to be played on the 23rd or 24th of February. Broadford will be away to Charleville or College Corinthians who meet on Sunday at 2.15.

RATHKEALE PREVAIL IN TOP OF THE TABLE CLASH

Rathkeale scored a significant win in the Premier Division title race when they won 2-1 away to previously-undefeated Abbeyfeale United and now the two teams are locked together at the top of the table, with Rathkeale having a game in hand.

A key moment in the game came in the 5th minute when Abbeyfeale’s Pakie O’Connor was shown a straight red. Pa Ahern had a chance to put Rathkeale ahead later in the first-half but his penalty was saved by Billy Quirke. However, Ahern more than made amends in the second-half when he scored twice to give the visitors a 2-0 lead. Kevin Murphy pulled a goal back in the 82nd minute after good work from substitute Darren Keane but Rathkeale held on for a crucial victory. They will take the lead in the title race next Sunday if they avoid defeat at home to Carrig Celtic.

Broadford remain in the hunt after a hard-earned 2-1 victory away to Kildimo United. Liam O’Shaughnessy opened the scoring for Broadford in the 20th minute and Paudie Walsh equalised with a great strike from the edge of the box in the 35th minute. The game looked destined for a draw until Darren Murphy flicked in an 85th minute winner.

Seoirse Joyce scored twice in Newcastle West Town’s 3-1 victory at home to Ballingarry, his second a 30-yard free-kick. Paul Downes was the other scorer for the home team. Ballingarry had a player sent off at 1-0 and their goal came from the penalty spot to make it 2-1.

Glin Rovers leapfrogged over Killeaney/Bally Rovers with a 3-1 victory in Knockdown. Gary Culhane converted a penalty and the other goals came from the Wallace brothers, James and John. Paul Brouder scored for the home team, who missed a penalty at 2-1.

Granagh United recorded the biggest victory of the day when they won 6-1 at home to Carrig Celtic. Alier Ajuong and Harry Dore both bagged a brace and the other goals came from the O’Donovan brothers, Damian and Kieran.

AK United advertised their Division 1 title credentials in striking fashion when they won 8-0 in the top-of-the-table clash away to Rathkeale B. Mark Curran and Keel Moloney both scored twice and the other goals came from Cathal Downes, Anthony Cregan, Liam O’Sullivan and Brendan McCarthy.

AK are four points clear of second-placed Adare United, who opened the scoring away to Breska Rovers but had to settle for a 1-1 draw after Mark Phayer headed an equaliser early in the second-half.

After six successive League defeats, Newcastle West Town Reserves got back on the winning trail with a 3-2 victory at home to Ballysteen. Their goals were scored by James O’Sullivan, Stephen Doody and James Guinea.

Shannonside FC came from 3-0 down at half-time to earn a 3-3 draw at home to bottom-of-the-table Feenagh. Declan Lane, Mike Behan and Timmy Keane supplied the comeback goals, while Bill Walsh and Liam O’Gorman (2) gave Feenagh their healthy but ultimately insufficient half-time lead.

Creeves Celtic lost their outright lead in Division 2 when they were beaten 3-2 away by Glin Rovers B, whose goals were scored by Patrick O’Shaughnessy, Joe Downey and Stephen Barrett. Creeves are now joined at the top of the table by St. Ita’s who won 2-1 away to Broadford United Reserves, whose goal was scored by Kevin Quaid.

Glantine are just a point behind in third after their 2-0 win away to Rockhill Rovers, who had a player sent off after 25 minutes. Evan Larkin and Chris Scannell were the scorers.

Knockaderry are also very much in title contention after a dramatic 4-2 victory away to Askeaton.

The mid-table battle between Killeaney/Bally Rovers and Pallaskenry ended in a 2-1 victory for the home team, whose goals were scored by Adrian O’Sullivan and Eoin Curtin.

There were two Youths walkovers on Saturday and so the only domestic game that was played was the 5-3 victory of Abbeyfeale United at home to St. Ita’s in the first round of the Desmond Youths Cup. The scorers were Jack Quinlivan (2), Colm Cleary, Olan Quigley and Jason Dillon.

ABBEYFEALE AND BROADFORD TIPPED TO MEET

Abbeyfeale United and Broadford United will set up a fifth round meeting against each other in the Munster Junior Cup in Riverside Park if they come through their fourth ties this Sunday. Both are at home against formidable opposition.

Carrick United won the Munster Junior Cup in 2009 and 2011 in an era when they were utterly dominant in Waterford football. Their League title win last season was their 12th in the last 15 seasons, a remarkable display of consistency. However, eight players retired at the end of last season, replaced by young players, and so now they are in a period of transition. This is reflected in their current mid-table position in the League, eight points behind unbeaten leaders Hibernians, who have a game in hand.

Abbeyfeale United are building up a record of great consistency themselves, having won the League title three times in the last four seasons. They suffered a blow in their bid to retain the title last Sunday when they lost 2-1 at home to Rathkeale but still are joint leaders with Rathkeale.

Pakie O’Connor was sent off in the 5th minute on Sunday but he will be available for this tie and that is important as he has been playing well. Chris Smith and Joe Kelliher shone bright in defeat last Sunday, while Darren Keane impressed after coming on as a substitute and will be seriously considered for a place in the starting eleven chosen by manager John Kelliher and his assistant Tony Stout.

Carrick’s pedigree has to be respected but, on current form, Abbeyfeale United, who are away to St. Michael’s in the semi-final of the Munster League Champions Trophy on February 10th, should be good enough to maintain their two-pronged provincial assault.

Fenit Samphires are currently fourth in Kerry’s top flight but there are only a point behind joint second and so have every chance of contesting the League Final between the top two at the end of the season. They are a young side who try to play good football.

Broadford also have young players in their team. Four of the players who starred in the famous comeback victory away to Clonmel Town in the 4th round of the Munster Youths Cup last Saturday also played in the league victory away to Kildimo United the following day, namely James Molyneaux, Kieran O’Flynn, Colm Ryan and Jamie Keane. However, Broadford also have very experienced players, such as John Paul King and Willie O’Brien who return to the side after missing last Sunday’s league game.

This blend of youth and experience should prove to be a winning formula for Broadford, who will want to stay on track to repeat their Munster Junior Cup semi-final appearance against St. Michael’s two years ago.