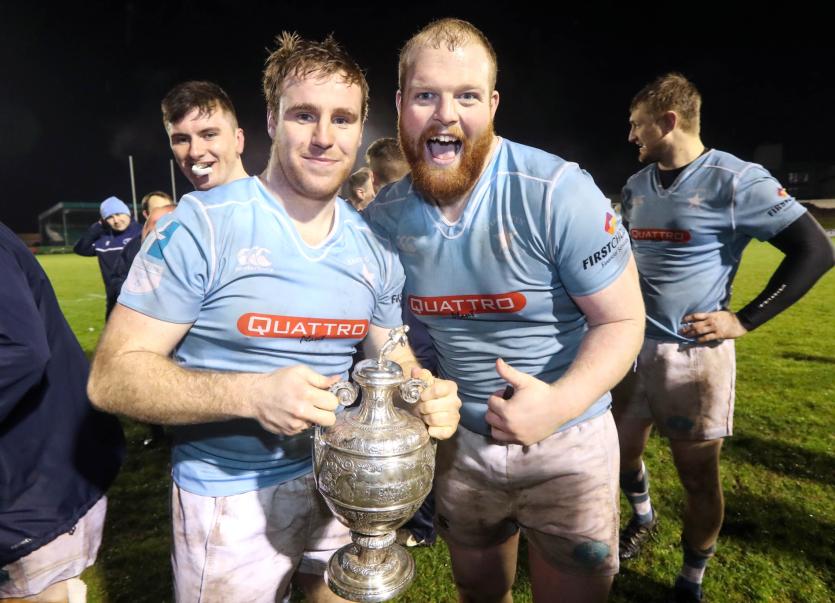 Liam Cronin was one of three men from Limerick clubs named last week in the extended Ireland Club squad for the upcoming International Series against Scotland Clubs.

The young hooker was in Ashbourne for the squad’s first training camp on January 5th. It was less than 24 hours after Garryowen’s defeat to Cork Constitution in the Munster Senior Cup final. Camp was a good distraction from that loss, with a number of Cork men now his team mates ahead of Dalriada Cup games in February.

“I was a bit fatigued coming in after the cup final, but I think it’s an opportunity to see what are considered the best club players in the country,” he said. “To see how different players interpret the game of rugby. A fella from Dublin might play a more expansive game whereas ourselves and Young Munster might play a nice hard physical game on a Friday night under lights. It’s interesting to compare and contrast the styles.”

Young Munster’s Dan Walsh was also named in the extended squad, as was Liam’s club-mate Andrew Keating. All three are rookies at this level, but Cronin knows the Ireland Club XV setup well. His brother Neil is joint third on the all-time appearance list and would surely have put his hand up for selection in 2019, if Munster weren’t in need of his services at scrum-half.

“Neil got his first cap in 2014 on a nice wet evening down in Temple Hill in Cork against Scotland,” says Liam. “He got to captain the home and away games against Scotland again last year. I went to the home game myself up in Dubarry Park and it was a good game to watch and I was a small bit proud of my brother.”

12 Garryowen players have featured at Club International level, more than any other Limerick club. Ciaran O’Boyle, Peter Malone and Gerry Hurley all started the very first game back in 2006, as did Conor Hartigan – albeit as a Buccaneers player at the time. Damian Varley made the squad a year later and so too did Conor’s brother Kevin. Another fraternal honour could be on the horizon for Garryowen.

“The advice I got from Neil was to do what I can do,” said Liam. “They obviously selected me for a reason. I have to make sure I bring it when I’m on the field or among the replacements and be consistent. Get my hands on the ball. It was the usual rugby talk.”

With brothers Liam, Neil and Sean Cronin all now looking to take their rugby to another level in 2019, there’s little room for any other type of talk in the Cronin household.