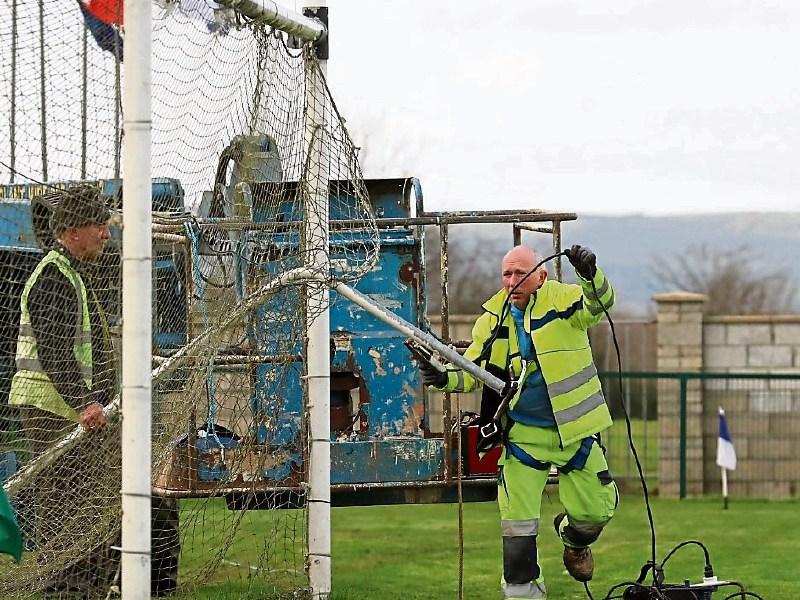 The show must go on: Nothing stands in the way of Kileedy GAA hosting their All-Ireland Junior B series. Here Seanie O'Brien is pictured welding a stanchion back onto the goal in some last minute prep

WHEN Killeedy's Junior B hurlers were crowned county champions in 2005, they asked, What next?

The answer, was nothing. Faced with no provincial series to partake in, the bright minded souls in the club decided to host their own Munster Club series. Something that the club have been running ever since.

This weekend, the 2019 Junior B hurling series, Munster final, will see Limerick's Cappamore taking on Inagh-Kilnamona of Clare at 2pm in Sunday.

“Like all good ideas, it was something that came up in the pub after the 2005 win” joked Majella Scanlon, a member of the hard working organising committee.

“Sean Kelly, the President of the GAA at the time helped us out in setting up this series” continued Majella.

“Alongside the Munster club championship, we also host the Leinster version, which is also at its final stage this weekend” added Scanlon.

Indeed this weekend is a busy one for the Killeedy club. First up on Saturday (2pm) is the Leinster final between Oylegate-Glenbrien of Wexford and Ballinderreen Hurling Club of Galway.

“We are busy alright” confirmed Majella.

“The Munster final one Sunday is also being preceded by our U-14's taking playing in a challenge game, so the whole place should be in excited form for the day”

The idea that a club would set up their own ‘inter provincial series’ is something that might seem foreign to other organisations around the country.

However, when you see the organisation and effort that goes into preparing this Junior B series, you can see why it is a success and why teams travelling to Kileedy always keep in touch when they leave.

“The friends we have made with other clubs makes all the hard work worth it” confirmed a busy Scanlon.