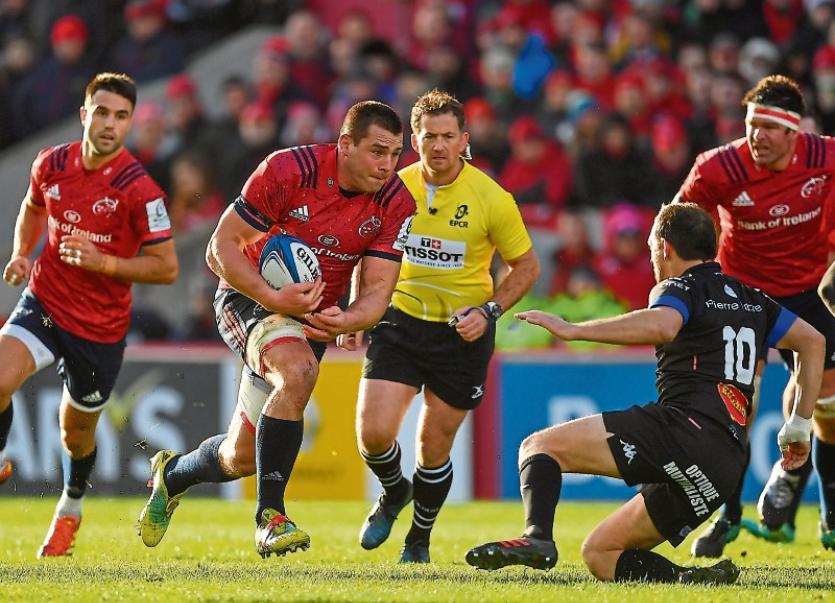 MUNSTER remain top of Heineken Champions Cup Pool 2 after scoring a hard-earned 30-5 victory over French champions Castres Olympique before an official attendance of 20,186 at a windy Thomond Park on Sunday.

The win leaves table toppers Munster three points clear of second-placed Gloucester at the mid-point of the pool stages of the competition.

Three second half tries from Rory Scannell, CJ Stander and Man of the Match JJ Hanrahan steered Munster to victory over their gritty opponents.

Munster, who led 6-0 at half-time, despite playing into a gale force wind, may come to regret not collecting a try bonus point in the second half, however.

Munster were dealt a blow before kick-off as Ireland international out-half Joey Carbery was ruled out of the game due to a ‘tight hamstring.’ His place in the starting line-up was taken by Hanrahan, with Tyler Bleyendaal coming onto the replacements’ bench.

In a double injury blow prior to kick-off centre Chris Farrell pulled up in the warm-up and he was replaced by Sammy Arnold, with Jaco Taute coming onto the bench.

Munster's support lines are a thing of beauty

Just look how many options are open to the ball carrier en route to this JJ Hanrahan try.

A solid showing for Munster who now have a two-point buffer at the top of Pool 2 pic.twitter.com/EKLQCaNFNF

Munster are now unbeaten in their last eight clashes against Castres.

The sides will meet again in the second of the back-to-back fixtures in France on Saturday evening next at 5.30pm Irish time.

Oh Conor Murray, that is special!

The Munster scrum-half hits the gap and sends CJ Stander over to make things comfortable for the Irish side...