WATCH: Limerick's Paudie O'Connor scores but is sent off in Cup thriller at Arsenal 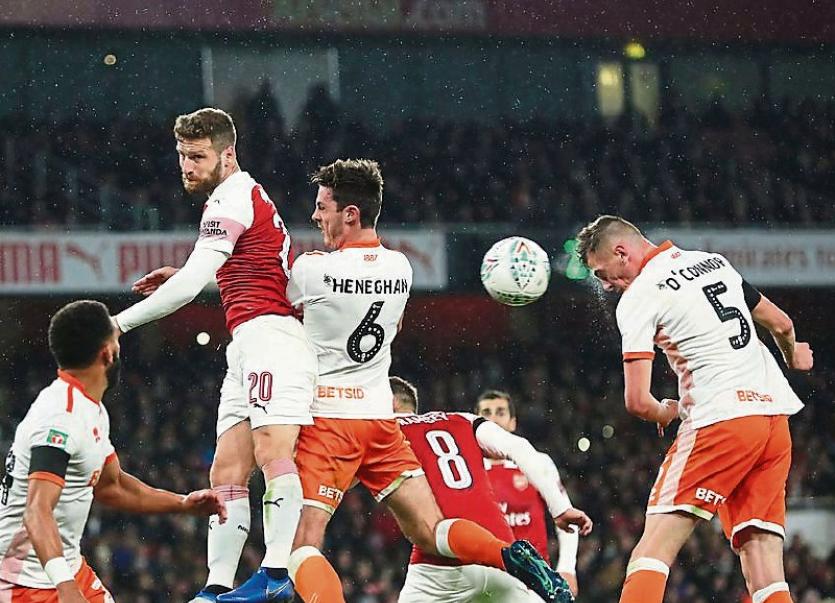 LIMERICK defender Paudie O’Connor scored with a header, but was later sent off, as his Blackpool side suffered a dramatic 2-1 defeat to Premier League giants Arsenal in the fourth round of the Carabao Cup at the Emirates Stadium on Halloween night.

Twenty one year-old O’Connor, from Ballybrown, rose highest at the far post in the 66th minute to emphatically head the ball past Petr Cech in the Arsenal goal and give League 1 side Blackpool hope of staging a dramatic comeback at 2-1.

O'Connor might well have scored two goals on the night, but was unfortunate to see his 53rd minute effort on goal from another corner come crashing back of the woodwork.

However, former Limerick FC defender O'Connor received a straight red card in the 85th minute for a late challenge on Aubameyang as the Gunners, who also had a player sent-off, held on to record a 2-1 win.

Ballybrown defender Paudie O’Connor joined English League One side Blackpool on a season-long loan deal from Leeds United during the summer.

O’Connor has now made six appearances for Blackpool, currently 12th in League one, since the start of the season.

The Limerickman was an unused substitute for Blackpool in their 3-2 defeat away to Fleetwood Town in their Sky Bet League One clash on Saturday.