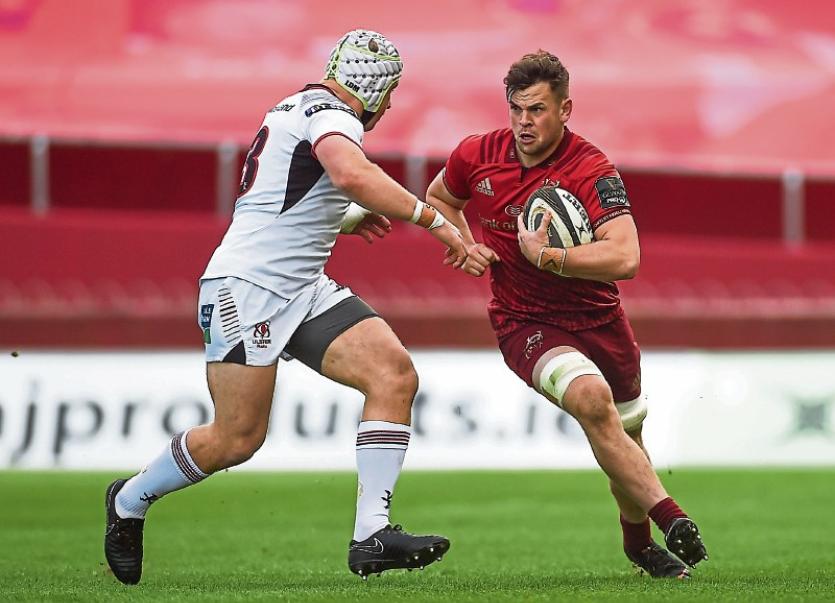 Munster suffered their second successive heavy defeat on the road this season when losing 37-13 to the Cardiff Blues in the PRO14 at the Arms Park on Friday.

While Munster take on Ulster in the PRO14 at Thomond Park this Saturday, 7.35pm, Johann van Graan’s side face two daunting away trips, to Dublin to face Leinster in the PRO14 on Saturday week, and to an in-form Exeter Chiefs side in the Champions Cup the following weekend.

Munster look set to welcome back Ireland international winger Keith Earls for the home fixture with Ulster. Earls had been sue to make his seasonal bow against Ulster last weekend, but was a late cry-off after picking up a knock in training.

Assistant coach Flannery says this weekend’s fixture against Ulster is crucial ahead of those back-to-back away games with Leinster and Exeter.

Jerry Flannery said: “I can’t allay any fears because if I stand back  from it and look at it, we played a Cardiff team that had lost three games and conceded 37 points, so of course people should be anxious with Leinster and Europe coming up.

“That’s why Ulster this week is so important this weekend. We massively have to make a statement.

“The good thing is that it’s at home and we have to  put in a real positive performance and get the supporters feeling more belief in us.

“One thing is our effort will never drop, our execution of how we perform on the field wasn’t good enough. That’s the coaches, that’s the players, everyone.

“You like to think that when people go to games, they will see good effort. I felt we tried at the weekend as well but that wasn’t good enough. Effort alone won’t win you games at this level.”

Results in the PRO14 this season through the opening four rounds has led several observers to believe that teams are targeting victory in their home fixtures more than away ones.

Flannery insists that is not how Munster look at their fixtures.

Flannery said: "That is certainly not the case here (at Munster). I think if you look at it, we played a pretty poor Ospreys team at home, so it wasn't like we just suddenly said, 'oh, we are at home, we are going to have a massive performance.'

“We played a really good Glasgow team who the previous year had pumped us when we went away to them as well, so if you think of the movie you saw last year, Munster played Cheetahs at home and Munster put 50 points on them. Munster go over to Glasgow and Munster get pumped by Glasgow.

“This year, Munster play Cheetahs at home, Munster pump Cheetahs. Munster go over to Glasgow, playing pretty much the full strength Glasgow team and get pumped. Then we play a second string Ospreys team.

Hooker Rhys Marshall suffered a calf injury in training last week and will continue treatment with the medical department after undergoing a scan.

Meanwhile, Munster report that their talismanic Irish international scrum-half Conor Murray is ‘progressing well’ from the neck injury which sees him sidelined at present. Murray last played for Ireland in Australia in June.

Flannery explained: “It's positive and we are seeing more and more of him on the pitch. He is beginning to start taking contact and things like that, so that's good.”