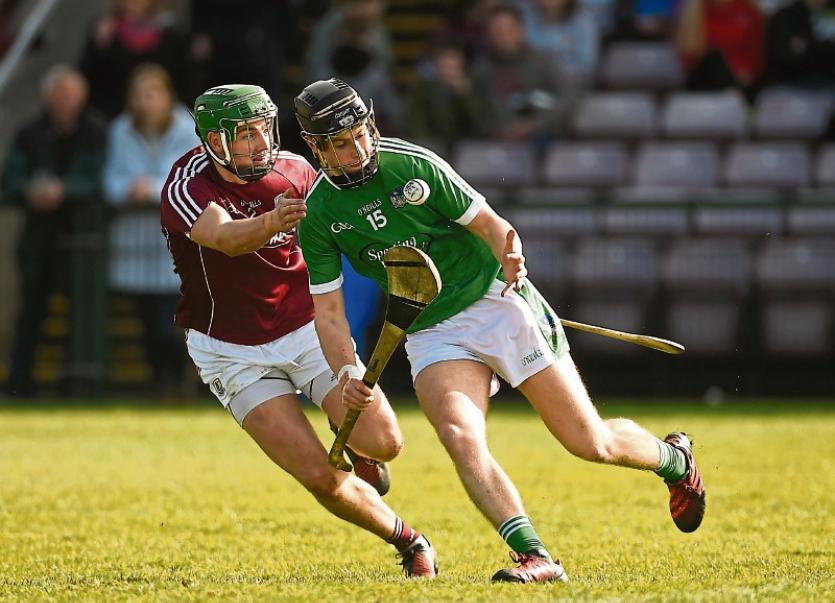 Opportunity knocks: Barry Murphy of Limerick in action against Adrian Touhy of Galway during the Allianz Hurling League Division 1B Round 5 clash back in March

The build up for the All Ireland hurling final can take off in earnest now after Galway just about edged past a brave Clare team in Thurles last Sunday.

It looked like it was going to extra time but Galway showed why they are All Ireland champions and closed out the game.

Clare had a couple of major chances that didn’t go their way but in the overall the better team won. Galway were only behind once over the two games and that tells you, despite playing below their standards, they still found a way to win the game.

Limerick took full advantage of last weekend and they got through a lot of work. From a run in point of view Limerick have had the advantage, but Galway know what is facing them and the pressures it brings over the next ten days or so.

Limerick met Galway in 1923, the 1980 final and lost the semi final to them in 1981. That 1980 final was the first time I was in Croke Park and since then I have not missed a hurling or football final. We will see lots of flashes of that final in the build up, but for this Limerick team it’s all about now.

One of the topical questions up to last weekend was who would Limerick prefer to meet in the final. I am sure John Kiely and his management team didn’t dwell too much on that but instead worry about getting themselves right.

Sometimes teams spend too much time worrying about the opposing team instead of getting their own house in order. The one thing we have seen from Limerick this year is that they have managed in nearly all cases to perform. That shows the consistency in the team but it also proves that they have developed the art of having themselves right for battle. It takes time to get all of the parts in place but certainly what we have seen from Limerick this year has been very encouraging.

The build up is well underway in Limerick but I sense a more conservative build up than in other years. Yes the flags are flying and yes supporters are talking about the game but I feel they are happy to give space to players and management to allow them be the best they can be in the final. The focus of this group of players is really good, although a young team they are showing signs of a more mature outfit. Age is no barrier to winning and the opportunity must be grabbed when it comes your way. Deep down the Limerick players are at one in that regard. They know the time is right and as a group they are right. They might not have shouted it from the tree tops but they expected to be where they are now. They had a target and bit by bit in this championship they have won admiration from all parts of the country. They have taken part in some truly outstanding games. They have played a major part in a great hurling year and wouldn’t it be great if we finally crossed the line and end forty five years of heartbreak in Croke Park on Sunday week.

Limerick will have a very good understanding of Galway and they will now go about planning a strategy for the final. Limerick are a mobile team and that mobility I think could be a very important part of their strategy for Galway. Pace will be important and taking on the Galway backs at every chance will open up the game. The last few weeks tell us that Galway might not be operating with the same sort of drive and power as last year but as a unit they are mentally very strong. They will have gained hugely from the last couple of weeks but circumstances also saw them learn a bit more about their team. Any notion that Galway will be tired from the extra games is nonsense and be assured they will have a pep in their step come All Ireland final day.

In all games this year Limerick have adapted to suit the opposing teams but they have stayed pretty close to building play through the lines. The players have become very confident and comfortable with the style of play. They also have the option of a fast ball to the full forward line and this has really suited Graeme Mulcahy, Seamus Flanagan and Aaron Gillane. For me I think those players will have a big impact in the All Ireland. Galway are strong down the middle but there is scope for success on the wings. Clare proved that and I am sure the Limerick management will have gained a fair bit from the match analysis of both games. The best laid plans can come unstuck on All Ireland final day. It’s a day that has a life of its own. It will take a lot of good hurling to win the title but there is always drama of some sort and how you cope can be telling.

Winning in the manner they did against Cork will have fuelled this Limerick team. They will taken a lot of confidence from it and also how they managed the Croke Park experience. It will be a little different on final day and they will be forced to have a great deal more time on the field. The agenda will be a lot more demanding and the players will have a lot more to cope with. I am sure sports psychologist Caroline Currid will spend a good deal of time on the build up and how to handle the pressures leading up to throw in. I have spoken to many players and managers over the years that will tell you the importance of getting it spot on from the time you leave the dressing room. Paul Kinnerk will bring a great deal of experience to the agenda having experienced with Clare in 2013.

Administrators at all levels will be under a lot of pressure to cope with the demand for tickets. Limerick will get around 18,000 tickets and closer to the time they might get a couple of thousand more. One of the County Board officers has made a few phone calls outside the county for advice on how best to handle the demand. Control of tickets gives power and it’s very important that the people that have served the GAA well are looked after. Priority must be given to those working on the ground and those that have given selflessly to the GAA. Many of those people should be in the VIP section but I look forward to scanning on the day because if past experience is anything to go by they won’t. I fully understand that dealing with tickets is never easy. Many people feel they are entitled to them and trying to satisfy everyone will be an impossibility. The hunt for tickets has gone nationwide and either way we can expect a huge Limerick crowd at the game. Galway will have the advantage in that their minor team is also in the final and that will assure them of at least four thousand tickets more. To get an All Ireland ticket you will need to be resourceful and those that are normally are satisfied.

Galway go into the final as favourites and that is understandable given that they are All Ireland champions but that will suit a young Limerick team. All Ireland final day is about getting the really small things right. The team that does that normally wins. Small margins win big games and I know that John Kiely and his management team will leave no stone unturned in the pursuit of victory.