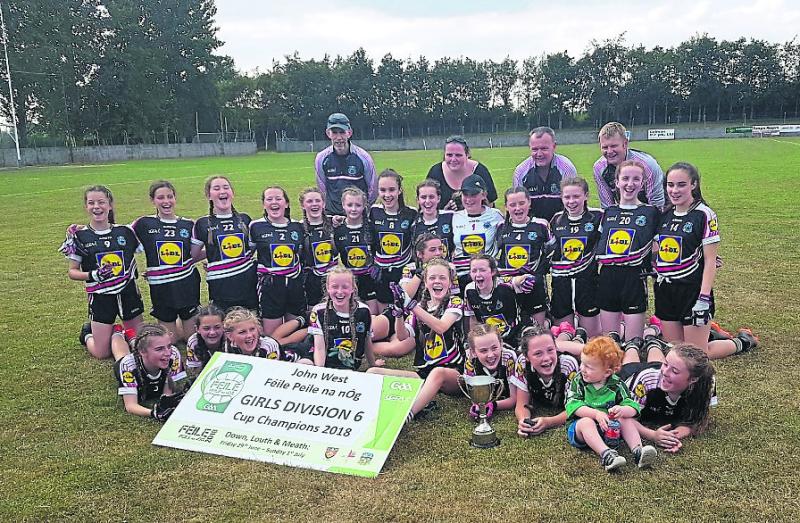 KNOCKAINEY were crowned All Ireland Feile Peile na Nog champions over the weekend.

The Limerick side won the Girls Division Six title at the annual U-14 Gaelic Football festival, which was hosted this year by Meath-Louth-Down.

Knockianey U-14 Girls set off from Knockainey Community Sportsfield at 9am on a beautiful warm Friday morning full of excitement and nerves.
The bus stopped at The Gandon Inn in Portlaoise for a hearty breakfast to fuel our skillful footballers. They then carried on to Louth where they stopped at the Monasterboice Inn for a light lunch and team talk to prepare them for the matches ahead.
They arrived at their host clubs venue Mattock Rangers where they were to play their first two matches.
5.45pm saw them take on Drumbaragh from Co. Meath and they were clear winners on a score line of Drumbaragh 0-3 Knockainey 6-5.
7.15pm saw them take on Patrick Sarsfields from Co. Antrim, This was a very tough game and the toll of the long journey up and the severe heat could be seen on our girls but they dug deep into the reserves and won by just 1 point on a score line of Patrick Sarsfields 1-7 Knockainey 3-2.
The girls then were provided with refreshments and returned home with their host families.
Saturday morning again we were back at our host venue where we took on our host Mattock Rangers. As always the girls did not disappoint and came out on top on a score line of Mattock Rangers 1-2 Knockainey 4-5.
Concentration was now on the quarter final, which would decide whether the girls finished on Saturday evening or would battle again Sunday morning.
3pm we took on Cappagh from Kildare, again the girls did everything that comes naturally to them and won on a score line of Cappagh 1-2 Knockainey 4-5. We were not through to the semi final Sunday morning.
Full of excitement we then went to neighboring town Ardee where we took part in the feile parade, the welcome and support was amazing. We then return to Mattock Rangers for refreshments and entertainment.
Sunday morning the girls said goodbye to their host families, who were absolutely amazing and treated our girls as if they were their own. Mattock Rangers got into the sheild semi final so our girls went to shout their hosts on. Unfortunately it was not to be their day.
Full concentration on the task on hand was resumed and our girls lined out to Baltinglass of Wicklow. at 12.45pm.
Again the sun was high in the sky and the heat was unreal. Our girls did not let that faze them they gave it their all and some incurred injuries on the way but they were triumphant and won on a score line of Baltinglass 2-5 Knockainey 5-6.
Now it was down to the final against Patrick Sarsfields at 3.45pm who we had played in the round games and had only beaten by a point. From the first blow of the whistle the girls gave it 100%, they were some controversial decisions by the referee but that did not matter to our girls. They fought for every ball and displayed fabulous passes of play and proved to the entire country what we already knew they were champions on a score line of Patrick Sarsfields 0-3 Knockainey 3-8.
We are so proud of our girls Feile All Ireland Champions 2018.
We send out our best wishes to Laura Moloney who was unfortunately unwell and could not make the trip to Louth but the girls kept her in their thoughts and ensured they secured an All Ireland medal for her.
This would not have been possible without our sponsors, parents, supporters and of course our wonderful bus driver for the weekend Mr Dick Finn and Martin Coaches. Thank you all so very much.