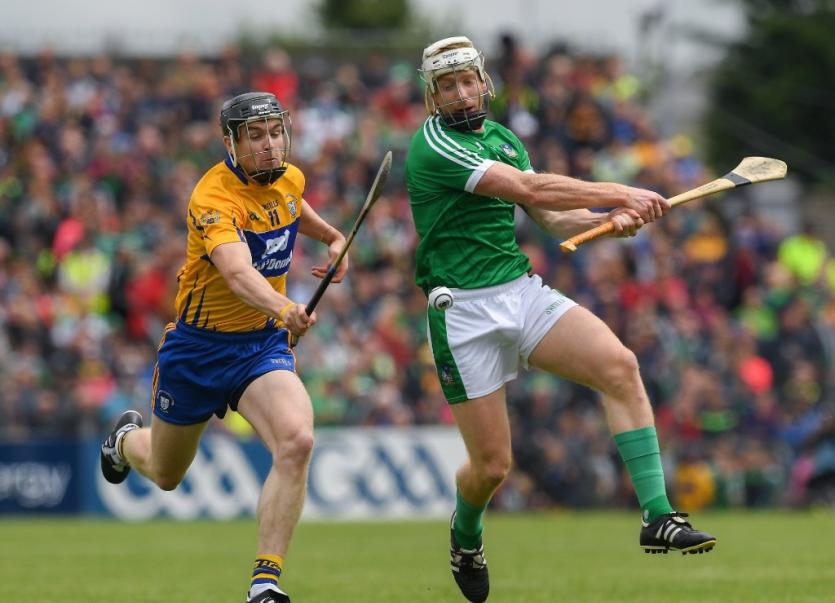 LIMERICK came crashing back down to earth with this 11-point defeat to Clare in the final round group game in the Munster SHC.

Instead John Kiely's men will be in action on July 7/8 in a preliminary All Ireland SHC quarter final away to the Joe McDonagh Cup winner - Westhmeath or Carlow. The winner of this tie would then play the beaten Leinster SHC finalist - Galway or Kilkenny.

This was a most sluggish display from Limerick, who never led or looking like leading throughout.

After a thunderous opening half, Limerick trailed 0-9 to 0-13.

Both sides were reduced to 14-man in the 31st minute - straight red cards for Tom Condon and David Reidy.

The half was never level, with Clare leading throughout a half in which Limerick had just three wides and Clare two.

In was tough, tight and tense and Peter Duggan opened the scoring with a free and would have seven points by the break.

Tom Morrissey had the first Limerick score in the sixth minute and the men in green had the wait 17-minutes for the next score from play - Kyle Hayes.

In between Shane Dowling frees kept Limerick in touch but Colm Galvin was among the scores as Clare led 0-7 to 0-5 with 23-minutes lapsed.

The 20th minute saw the only half chance of a first half goal but Dowling's opportunity was smothered by the defence after he gathered an O'Donovan lineball.

Both Limerick and Clare lost defenders to injury in the opening half and Banner replacement David Fitzgerald hit the next two scores from play and soon the home side were 0-9 to 0-5 clear with 10-minutes to the interval.

A Dowling free and Darragh O'Donovan lineball reduced the gap to two points but Clare surged ahead again with Jamie Shanahan firing over from distance.

Cian Lynch and Diarmaid Byrnes had Limerick scores in succession but Duggan frees ensured a four point Clare lead at the break.

With both down to 14 men, Limerick opted to change formation at the break and introduced Richie McCarthy for Graeme Mulcahy - the full back becoming the 24th player to see action for Limerick in the four games so far.

Tony Kelly hit the ground running on the resumption with two points and soon Clare were leading by 0-17 to 0-11 with Tom Morrissey and Seamus Flanagan getting the early Limerick scores in the half.

Kyle Hayes had a shot for goal saved but Gearoid Hegarty and Dan Morrissey attempted to kick-start Limerick with points but Clare continued to set the pace and led 0-18 to 0-13 with 12-minutes gone in the half.

Aaron Gillane was introduced and made an impact with an immediate score to reduce the deficit to four points at the mid-point of the half.

A third of the day for Tom Morrissey had the game back at four points with 10-minutes to play and both sides tiring after an absorbing war of attrition.

Clare then raced over the winning line with the next six scores to lead 0-25 to 0-15 and with Limerick without a score in the final 15-minutes.