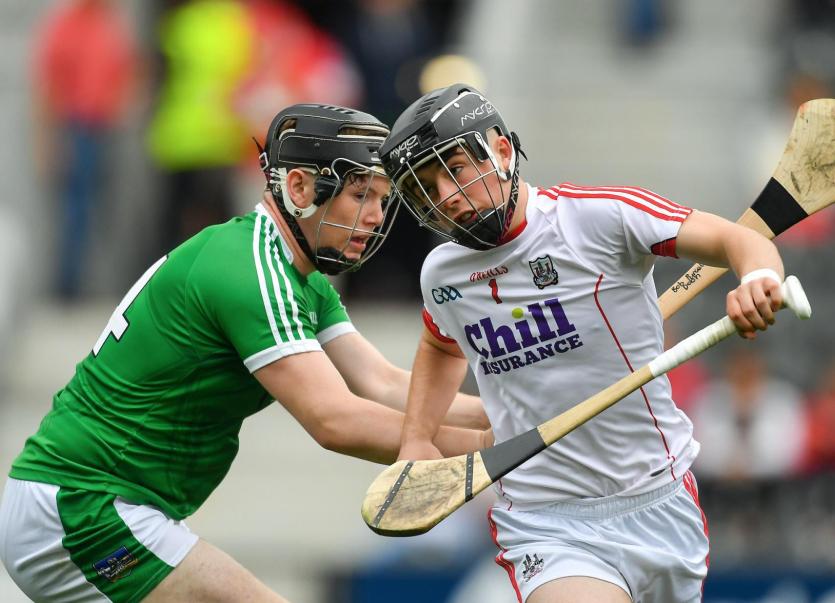 Action from Limerick minor's win over Cork on Saturday night

IT IS two down, two to go for the Limerick minors and their quest to reach the first Munster final since the grade went to U-17.

After finishing strongly to defeat Tipperary in round 1, this was a more routine win as five points between the 28th minute and half time put Antoin Power’s men in the ascendancy and they never relinquished that lead after the break.

Up next, it is a clash with Waterford in the Gaelic Grounds and a Limerick win will all but secure a provincial final passage. Waterford will come into the game full of confidence after their impressive late rally saw them overcome Tipperary

Power has seen the Deise in action and knows they pose a threat:

“I was in Ennis last week. They’re a good side, a big, strong physical side and we’ll have it all to do to beat them,” he said.

“I know Clare got over them but this thing is wide open – everyone is beating one another and we’re just lucky to have two out of two so far.”

Saturday’s win was the first in a run of three games in three weekends. However, despite the heavy schedule, Power feels his panel is getting stronger as they have players returning from injury.

“We’ve a good squad. We were down a few boys, Kyran (O’Donnell) and Danny (O’Leary), the first day and they came in and added another bit of value to it,” he said.

Once again Cathal O’Neill was the main scoring threat, the Crecora man notched 0-11 for the second game in a row.

“(He is a) super young lad and very unassuming, a very shy young fella as well but (he) just plays the hurling and in fairness, we are lucky to have him and he is part of a good squad,” said Power of his free-taker.

The Claughaun man was keen to emphasise that this Limerick side is much more than a one man team:

“Emmet McEvoy, Patrick Kirby, Colin Coughlan, Cormac Ryan with his goal – they all added to it and it just goes to show it’s not a one-man team it’s a squad performance which is great,” he added.

Despite riding the crest of a wave having beaten the traditional powers of Munster hurling, Limerick are in a good place with two games to go.

“We won’t too get carried away,” Power said. “The thing about it is, this is round 2, next week is round 3, we’ll recover tomorrow and prepare for Waterford next Sunday and we won’t look beyond that.”

Cork manager John Considine conceded the Rebels were beaten by the better side.

“We can’t really have too many complaints, we were probably second best – they just had that edge on us,” he said.