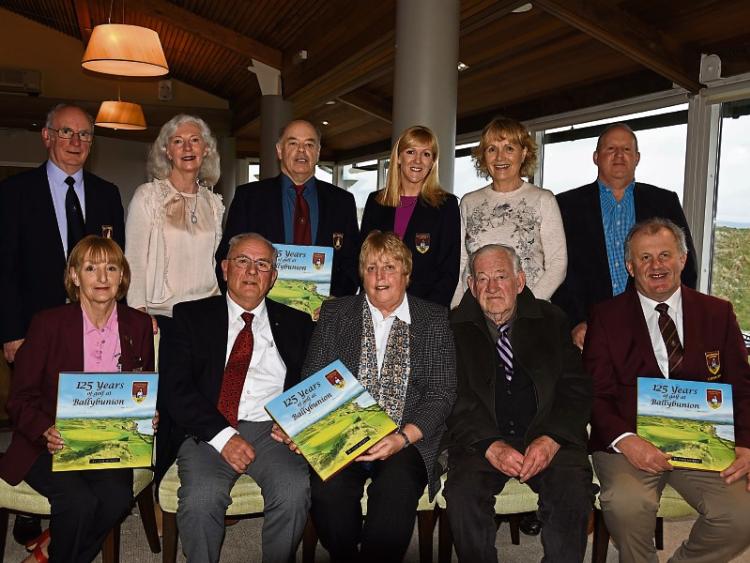 The Ballybunion Golf Club 125 Anniversary Organising Committee at the launch of '125-Years of Golf at Ballybunion' written by Limerick author, Ivan Morris, front second from left

It was an honour and a pleasure to be invited to write a book to commemorate 125-Years of Golf at Ballybunion Golf Club.

The book was officially launched at the opening of the new golf season earlier this month by Honorary Life Member and Ireland's most decorated-ever, lady golfer, Mary McKenna MBE, who won two of her Irish Ladies Close Championships at Ballybunion in 1969 and 1977.

At the beginning, golf at Ballybunion was perceived as a means of helping the eccentric, narrow gauge Lartigue Railway between Listowel and the seaside village to grow its business, especially as the General Manager of the Railway Company, Patrick McCarthy, had 'doubled-up' and become the first secretary-manager of the Golf Club.

When Patrick's son, William (a solicitor in LIstowel), took on the office of honorary secratary of the Golf Club in 1924 until 1952, he was more 'golf-orientated' and savvy.

He adopted a hands-on approach towards developing the golf course. With precious little knowledge of the game (at first) William instinctively understood that Ballybunion's unique dunes and seaside landscapes had golfing potential in an international context.

Such vision has never been in short supply at Ballybunion. Never more so than in 1970 when the Club Captain, Michael F. Barrett (who sadly passed away on 3 March this year) found himself up against a brick wall when he tried to secure a modest Bank Loan (by today's standards) on behalf of the Golf Club to fund a badly needed new clubhouse.

The determined Mr. Barrett would not take no for an answer. He badgered every bank manager in the county, and some outside it, looking for the necessary loan.

In the end, he was forced to take the grave personal risk of leveraging the required funds through his own business contacts overseas. Success is all about timing.

Perhaps Mr Barrett foresaw the trickle of Americans that had only just started to come to Ballybunion, turning into a flood?

Cool heads, know how and organisational skills were badly needed when several holes along the shoreline were 'almost obliterated' by a massive Atlantic storm in February 1977.

That was the crucial moment when the incumbent Captain, Jackie Hourigan and Club Manager, Sean Walsh, stepped in with a Save Ballybunion Fund that generated a huge response in goodwill and hard cash from every corner of Ireland and beyond.

It was also when Ballybunion found out how revered and loved the course was.

Some say it was 'luck' that Tom Watson arrived in 1981 when he was at the height of his powers and fell in love with the place to the extent that he became Club Captain in 2000 and regularly extolled its virtues in the media.

Such publicity is pricless. But, you must exploit your luck too. Sean Walsh and the various club captains that succeeded Mr Hourigan took full advantage of their luck and deserve every credit for doing so.

Today's members are acutely conscious of the legacy handed down to them and recognise their responsibilty to protect and enhance what they were given.

To maintain the course's high standing worldwide, the current Club Chairman, Pat Harnett, spearheaded a project that began in 2014 to give Ballybunion a 'new look.'

A staff of up to 100-people was put in place by the triumvirate of architect, Graeme Webster, a local golf course construction company, Atlantic Golf Construction, headed up by Anthony Bennett and the Ballybunion course manager, John Bambury, a native of Ballylongford.

As Harnett explained: "We wanted to restore fescue grasses, so the links will play as it was intended from its earliest days; fast and loose. It's a necessary undertaking to make sure that Ballybunion keeps its position in world golf."

The book, which was designed by Fintan O'Connell of Inspire Graphics, Skibbereen and printed by Walsh Colourprint, Castleisland includes photographs of the club's personalities down through the decades as well as pen pictures of the club's highest achievers on the field of play; including native-son, Pat Mulcare, a South and East of Ireland champion and Walker Cup representative in 1975, Tommy Corridan, the only Ballybunionite to win the Irish Amateur Close title and Emma O'Driscoll, the Irish Girl's champion in 2009.

The club's seven All Ireland team triumphs are covered as well as all of the national and international championships, team and individual, to be hosted at Ballybunion.

The most important of these was the Murphy's Irish Open in 2000, won by a Swede with an Irish name: Patrick Sjoland.

The R&A was mightily impressed when it hosted the Jacques Leglise Trophy 2017 Matches and later this year the club will host the Ladies and Girls Home International Matches.

The list of golfing stars from overseas who have visited Ballybunion reads like a who's who. Perhaps, the one who caused the greatest excitement even if he was far from being the best golfer to play the links; scattering Presidential Seal golf balls to parts of the golf course rarely trod upon was President Bill Clinton in 1998.

The book is now on sale (exclusively) in the club's pro shop for €40, or on line from info@ballybuniongolfclub.ie I'm not exaggerating when I tell you it is almost sold out already; hardly surprising because it is a fascinating story of a club's rags to riches survival through more thin than thick, told by someone who has been a member since 1962 and has lived through 'half of it.'