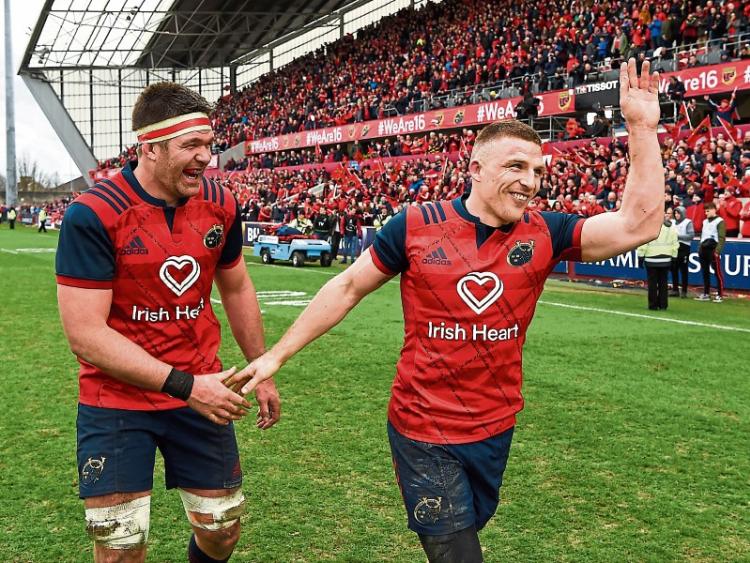 THE Munster Rugby squad is jetting out to South Africa on Easter Monday for two Guinness Pro14 fixtures.

The 28-man squad plus team management will travel from Dublin to Cape Town, via Dubai, on Easter Monday.

The touring party will include both Simon Zebo and Conor Murray who appeared to pick up knocks in Saturday’s thrilling 20-19 win over Toulon.

The group will  base themselves in Cape Town, and travel to George and Bloemfontein for their respective Guinness PRO14 encounters against Southern Kings and Cheetahs.

Munster’s first Pro 14 fixture in South Africa will be against the Southern Kings next Saturday, April, 7 at Outeniqua Park (7.35pm local time).

For the return journey, the Munster squad and management team will depart from Johannesburg to arrive in Dublin on Sunday April 15.

Munster will then face Racing 92 in the semi-final of the Champions Cup on the weekend of April 21-22.

Looking forward to the tour to his native South Africa, Munster head coach Johann van Graan said:  “It's an interesting scenario, when I took the job it was one of the first things that I saw.

“At that stage, getting to a quarter-final (in the Champions Cup) was a long way away. To play in a quarter-final, hopefully win it, fly to South Africa, play two away games in the PRO14, one at altitude and then fly back and go into a European semi-final was always going to be, if you think about it, tough. Now, it's a reality.

“We've planned for it, we've said we're going to enjoy the tour even though nobody has even spoken a word about it. We'll just get to South Africa now and re-assess once we get there.

“Get back to zero, play two games there whilst having a big eye back north for when we come back for that Champions Cup semi-final.”

On the injury front, Munster have confirmed that Tommy O’Donnell underwent surgery for the shoulder injury he sustained against Scarlets in the Pro14. The flanker has been ruled out for the remainder of the season and joins a significant rehabilitation list, with Keith Earls, Tyler Bleyendaal, Duncan Williams, Chris Cloete, Jaco Taute and Chris Farrell already sidelined.

Following the British and Irish Cup quarter-final defeat to Leinster A on Good Friday, hooker Kevin O’Byrne will require further medical review for a hip injury he sustained in the first half.