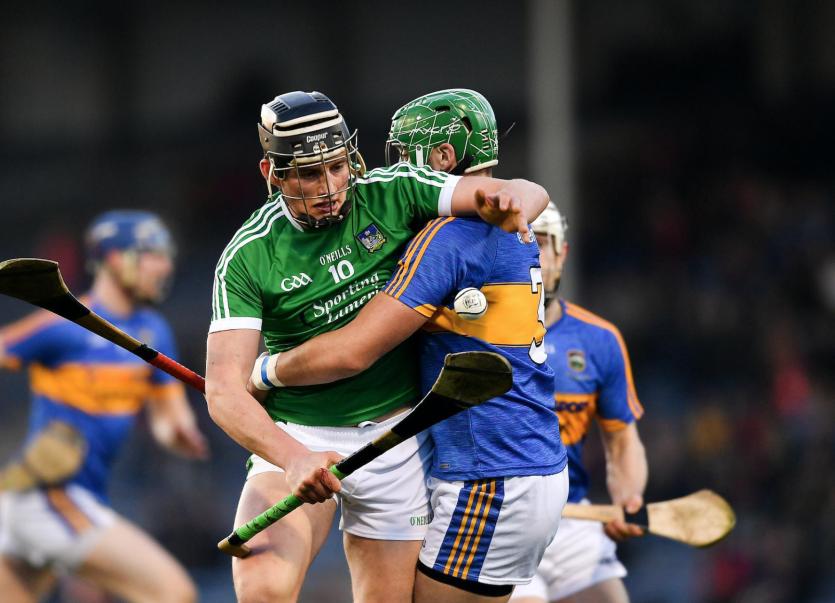 Limerick lost out by three points to Tipperary in tonight's Allianz Hurling league semi final in Thurles. The scoreline of 1-31 to 2-31 after 91 minutes of hurling says it all. Tipperary advance to meet the winners of Wexford and Kilkenny next weekend, while Limerick have to wait until the Munster championship on May 20 to face Tipperary once more.

This was an epic game of hurling and one, despite the result, will give Limerick fans huge optimism for the season ahead.

The first half saw Tipperary start the better of the two sides, following a 20 minute delay due to the curtain raiser (St Kieran's All Ireland colleges final win over Athenry) going to extra time.

Tipperary had the first two scores of the game from John McGrath and Jason Forde, before Limerick raised a white flag when Aaron Gillane knocked over his first free of the game. The Patrickswell forward had to have his ankle heavily strapped in the opening minutes following a twist of same in the turf.

The sides would share scores for the next seven minutes before, with the teams tied at 0-4 apiece, Tipperary went on a run. The Premier county rattled off four scores in a row from Barry Heffernan, Jason Forde, Willie Connors and Michael Breen to see Limerick in a spot of bother at 0-8 to 0-4

Gillane stopped the rot in the 22nd minute with a free, before Tipperary had a real goal chance denied by Richie English in the Limerick defence. The Doon corner back was booked for his professional like foul on Forde, who duly knocked over the score to stretch his side's lead to 0-8 0-5.

Again, the sides swapped scores in what was an end to end contest. The game came to life, for Limerick anyway, in the 30th minute when they went on a run of their own. Kyle Hayes (2), Seamus Flanagan and Aaron Gillane tied the sides at 0-10 apiece. A feat not to the sniffed at considering Limerick had eight wides in the first half to Tipperary's one.

With half time approaching and Limerick gaining the momentum, it was Tipperary who finished the half like they had started. The home side knocked over the last two scores of the half, in injury time to lead 0-12 to 0-10 at the break.

If the 12,0006 people in attendance thought the first 35 was good, then the second 35 was even better from both sides. Again the game ebbed and flowed with Tipperary once more the stronger starters. Tipperary began with two in a row from Jason Forde, before Limerick replied with three of their own from Hayes, Morrissey and Aaron Gillane. The over and back nature of this half is best explained by the following scoring timeline. Tipperary raced into a 0-18 to 0-13 lead in the 48th minute, before Limerick replied once more with four points in a row to make it 0-18 to 0-17.

Points were shared over and back once more before the sides were level at 0-19 apiece. Tipperary went two in front again through John O’Dwyer and Sean Curran, before Gearoid Hegarty put a stop to their run with a point of his own.

The tie looked to be getting away from Limerick in there 64th minute as Jason Forde tapped over Tipperary’s third point in a row to move them into a 0-24 to 0-20 lead. Limerick, who at this stage had brought on Paul Browne, Pat Ryan and Graeme Mulcahy rallied with a Tom Morrissey free from distance. That seems to give John Kiely’s men some belief and despite Tipperary taking a 0-26 to 0-22 lead with just three minutes remaining, Limerick finished the game with four points in a row from Lynch (2), Mulcahy and Hegarty to force extra time.

One again, for the third time in the game, the men from Tipperary started the better after the whistle. Jason Forde, who was man of the match on the night, scored a point before intercepting the subsequent short puck out from Nicky Quaid to score a brilliant goal. Limerick now trailed by 1-27 to 0-26.

A second Jason Forde goal just five minutes later saw the Michael Ryan coached side take a 2-28 to 0-29 lead at the break in extra time.

The last ten minutes of this game were played like the first. The players from both sides must be commended for their commitment to the game in what was a game for the ages. The sides shared three scores in the last period of extra time, with Limerick bringing the deficit back to a one goal game with a net rattler from Graeme Mulcahy in the 87th minute.

Even though Tom Morrissey had a shot at goal in the dying embers of the game, it was not to be Limerick's night in a game which they never managed to take the lead.

For a full match report from tonight's game, see next Thursday's Limerick Leader for more.