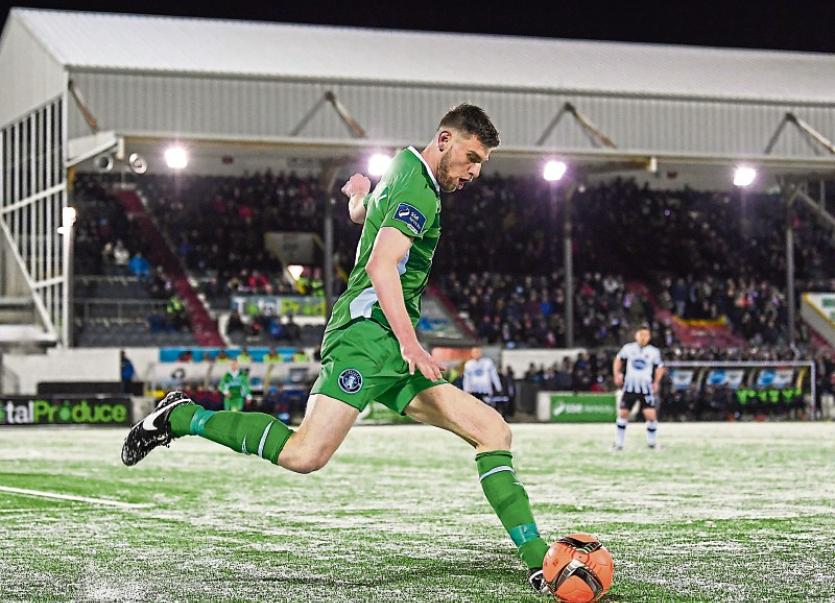 Heavy defeat: Kilian Cantwell of Limerick pictured during his side's 8-0 loss to Dundalk at Oriel Park

LIMERICK FC will look to get their SSE Airtricity League Premier Division season back on track following their Oriel Park humbling when hosting Bray Wanderers at the Markets Field this Friday, 7.45pm.

The visit of Bray will be Limerick’s first outing since their 8-0 thumping against Dundalk as last weekend’s scheduled fixture with Shamrock Rovers was postponed due to the snow.

Limerick FC manager Tommy Barrett admitted the video review of their heavy defeat at Dundalk made for painful watching.

“We watched the goals back from the Dundalk game, obviously we were disappointed.

“From our point of view, it was kinda embarrassing obviously. Could we have done anything better as a management team? I, myself, probably was looking at their game with Bray and thought we would sit back, keep it tight and compact for the first 20 minutes, frustrate them a bit.

”In hindsight, maybe, we should have pressed a bit higher, but in saying that and the lads have acknowledged that we didn’t press anywhere around the pitch.

”We let runners by us and didn’t play well. The lads know that. They are an honest bunch.

Barrett said it will be between 10 and 15 games into the season before a clear picture of clubs’ realistic ambitions for the season emerges.

”It was a disappointment that last weekend’s game with Shamrock Rovers was postponed. It was important to get a game as quick as we can and hopefully get out of the system, hopefully play well and get a result.

”The league levels out after 10 to 15 games. You don’t know where anyone is going to be after three or four games. I think you have to look at it after 10 games.

“We will be looking at it after that. There are no easy games. Bray are a good side. They have a lot of very good players.

“They are definitely an attacking threat. They have a really good front four, their midfield are solid and they have good defenders as well. There won’t be anything easy.”

Midfielder Lee J Lynch opted not to re-sign for Limerick this season, instead opting to join FC Arizona of the National Premier Soccer League in America this week.

Tommy Barrett said: ”I spoke to Lee J (Lynch) and he indicated that he was going to go play abroad, that Ireland, he felt, wasn’t for him at the moment.

“We wish him well, I hope it goes well. It is a great move for him. he is a decent player and I am sure he will do well.”