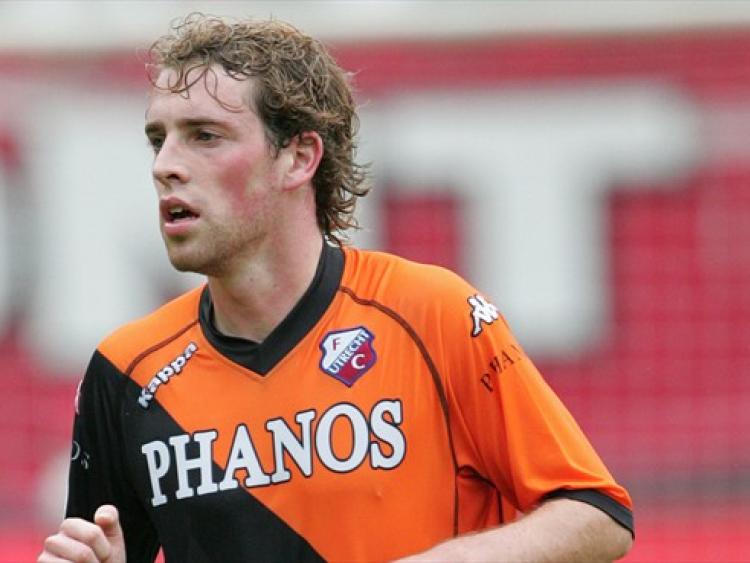 Barry Maguire during his time at Utrecht

The midfielder (28) has trained with the Blues over the last week and a contract was agreed before the Bohemians clash on Saturday.

Shannonsiders chief Tommy Barrett confirmed that they’re just awaiting international clearance for the Dutchman – but he’s unsure when exactly that would be finalised.

Maguire was once considered a real prospect for the Irish national side after he was capped at U16 level in 2005 – but chose to represent the Netherlands from thereon-in. He even lined out for Holland against Ireland at Richmond Park at U19 level.

Don Givens named him in an Irish U21 squad to face Germany back in 2009, but he declined the invitation – opting to stall on making a decision regarding what nation he would potentially represent on a permanent basis.

He shot to prominence as he featured for Den Bosch at just sixteen, before going on to make nearly seventy appearances for the club by the time he turned nineteen.

A move to Utrecht followed, as he would go on to rack up a further fifty appearances at Galgenwaard. Perhaps his best-known moment in football was scoring the fourth goal for FC Utrecht, to beat Celtic in a Europa League play-off in 2010.

At twenty, he moved on to VVV-Venlo before returning to Den Bosch in 2013. His first spell outside of Holland was for Norwegian Tippeligaen outfit Sarpsborg 08, where he stayed for two years.

Last year, Maguire moved back to his hometown of Tiel to play for his local side for a few months. He’s been actively seeking a new club and landed at UL at the beginning of last week.

It’s understood he won’t be registered in time to play Shamrock Rovers on Saturday, but he should be green-lighted for the crunch clash with Bray Wanderers at the Markets Field.

Barrett also confirmed that Jeff McGowan has signed a contract with the Blues. A Clare native, McGowan moved to Barnsley at a young age, before returning to take pre-season training at Dundalk last month.