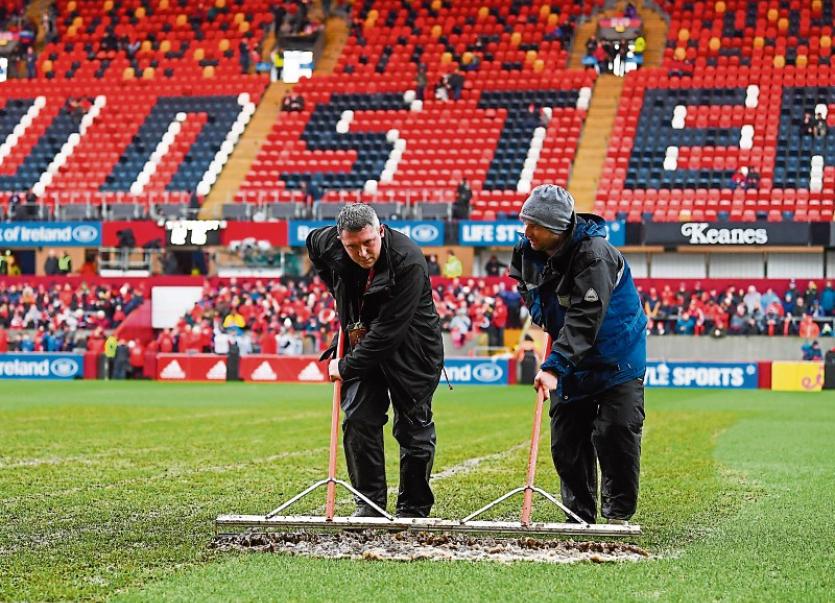 THE kick-off time for Munster’s crunch European Champions Cup pool fixture with Castres Olympique has been delayed for three hours due to the heavy rainfall overnight and on Sunday morning.

Shortly before 12.30pm, half an hour before the scheduled 1pm kick-off time, match referee Ben Whitehouse confirmed that start time for the Round 6 game with the French Top 14 side would now be 4pm on Sunday.

The incessant heavy rain had left parts of the Thomond Park pitch saturated.

Referee Whitehouse said he found there was standing water on the pitch and player safety was paramount.

A PA announcement informed supporters inside the ground that 'in the interest of healthy and safety' a decision had been made to put kick-off time back until 4pm. Tickets will be valid for fans who wished to leave stadium and return later in the afternoon.

Most fans left their places in the stadiums and terraces quickly after the announcement was made, but some took some time to weigh up their options on how best to deal with the three-hour delay.

Munster need to win their final pool game to book their place in the quarter-finals, while a bonus-point victory would guarantee the province home advantage in the last eight.