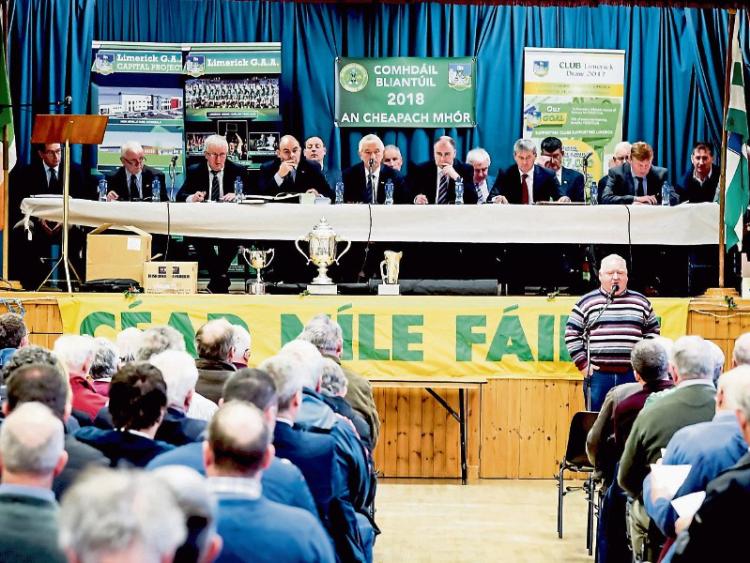 COUNTY conventions normally provide the opportunity to shine some light on the year’s affairs.

In the case of the Limerick County Board, it was more like flashing lights, as delegates looked on and saw the dysfunctional nature of how this board was run during the past year and in previous years.

For a long time now I have reported the facts in relation to the Limerick County Board and many of those sitting at the top table should hang their heads in shame.

It was shocking to see how matters were left get to the pathetic stage that was exposed to all present last Sunday. Quite frankly what we witnessed was no surprise to me — but for the delegates, it was jaw-dropping stuff.

In the weeks leading up to the convention, many of the officers of the County Board were deeply worried that Donal Morrissey would drop a ‘bomb’.

It took a long time for the true nature of the damage to unfold, but when it did, it left many at the top table hoping the ground could swallow them up.

The debate around the accounts of the Limerick County Board went on for one hour and twenty seven minutes, but it was only in the last ten minutes that Donal Morrissey delivered the blow that left many gasping.

It came after some questions from the floor. The answers given cast doubt on the accounts and some of the people that signed them off.

Donal Morrissey painted a picture of ‘poor me’ — he wasn't happy to have been left out in the cold.

In my view, Donal Morrissey washed his hands of the job long before last Sunday.

I believe that. had he the best interests of Limerick GAA at heart, he would have walked away long before now.

About a year and half ago, the chairman, Oliver Mann, was asked by members of his board to speak to Morrissey and to ask him to stand down. At that stage Donal Morrissey had missed many meetings of the officers board. The chairman said he would. but instead he came up with a diluted version — a scenario that came back to haunt him last Sunday.

A few weeks ago Donal Morrissey went to Croke Park to complain about one of the most senior officers sitting at the top table. He was barely back in Limerick when Oliver Mann made his way to Croke Park to dismiss what Morrissey had told them at HQ.

I have reported in this paper many times that Donal Morrissey and county secretary Mike O’Riordan did not get on. It had got to the stage that O’Riordan and Morrissey would not deal with each other. Denis Holmes had the job of facilitating meetings between them. All of this gives you a clear insight into the lack of leadership and governance at County Board level.

The set of accounts that were presented to convention should not have been passed. The accounts that were passed leave many unanswered questions — not only about this year but surely previous years. The cost of running county teams but in particular the senior hurling team has gone beyond a joke. How in God’s name can you justify an increase of 30%, or €250,000, on preparing teams?

Is the major cost now with the personnel we have over the senior hurling team?

This needs to be explained further because if you win no game in either hurling or football at senior level then it shows a very poor return for the big sums of money spent.

The Limerick County Board are trying to buy success and over the years have wasted huge sums on various managers and backroom teams. Have we made any progress under them?

The money spent on gear was staggering. A lot of those Limerick players could sell gear, they have so much of it. In Galway this year the players decided to forego the gear and it didn’t do them any harm. At what stage will it be about winning major titles? There is a great need for some serious refocusing in Limerick.

This convention really opened up when Donal Morrissey said his role was that of only a bookkeeper. He went on to say: “I am not privy to the decisions and I am not consulted about the decisions. I am excluded from the decision-making process. The role of the treasurer of this County Board has been reduced to that of a bookkeeper.”

Those comments woke the meeting up and it was interesting to see the reaction of Michael O’Riordan and Oliver Mann at the top table.

O’Riordan was stony-faced, while Mann looked to be gasping for air.

Emmett O’Brien asked if the chairman or secretary had anything to say . With no sign of assistance from O’Riordan, it was Oliver Mann who said he accepted he made some of the decisions, adding that they were backed by an understanding that he had secured a large sponsorship.

It was hard to make sense of what he meant by those comments. What sponsor was he talking about?

Michael O’Riordan made no contribution.

Time after the time the Limerick County Board get it wrong and still many of these officers are left in position. At what stage will they take responsibility for their actions?

Serious questions still hang over how business was done this year. Exactly why did Donal Morrissey go to Croke Park? What was so important that he felt HQ needed to be made aware of? If Donal Morrissey was outside the loop, then who exactly signed the cheques?

I remember Donal Morrissey as a delegate for his club, Ahane. He sat with legs crossed and had lots of questions and answers.

He was given ample time to make changes but instead of focusing on the job he was elected to do, it appears his time was consumed by trying to influence matters he should have had nothing to do with.

There is an old saying in coaching, “Did I leave them better than I got them?” Well, in the case of Donal Morrissey’s term as treasurer of the County Board, the answer is No.

John Cregan got a large majority to become the new Chairman of the County Board. Such a mandate gives him the power to make change. He needs to change how business in done in Limerick GAA and if that means making hard calls then do it now. If he waits until next year it’s too late.

The fabric of Limerick GAA is tarnished once again. The damage has been done by those holding the power. John O’Brien’s intervention ended the saga last Sunday. John is measured in his views, but we needed to hear more before his intervention saw this most serious matter swept under the carpet.