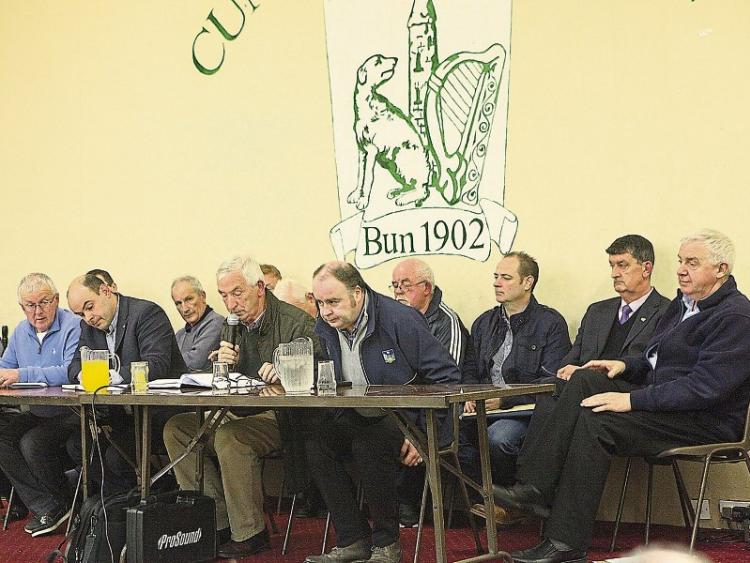 THE annual convention of the Limerick County Board takes place on Sunday in Cappamore and the fact that we have a contest for the position of Chairman should ensure a full house.

This was the year when change was expected at the top table, but sadly what we have for the best part is changing of the chairs. There is little doubt that freshness is needed to drive Limerick GAA and the major challenges that lay ahead for it.

To those on the outside and not in the know all would appear to be grand but that has not been the case. The success enjoyed by the U21 team in someways camouflaged the difficulties that have made progress difficult at board level particularly over the past couple of years.

Limerick have a lot of ground to make up in many fronts and it will take a lot of hard work by the new board to steer the county over the next few years.

In-fighting amongst some of the key officers made life difficult in recent times and what we had was a lot of looking over the shoulder and that is no way to run the affairs of Limerick GAA.

Leadership must come from the top and with that direction is provided to the clubs on the ground. As one officer told me, “We have seen little progress from a board point of view and it was a case of putting out the fires before they got out of hand.”

More change was needed at the top table, but sadly what we have now is a reluctance of people to put their names forward. Given the financial and development challenges facing Limerick GAA they need to have a more cutting edge and vision from those leading Limerick GAA.

We have fallen well back in many respects but those with closed vision will tell you all is great, “Haven't we won another U21 title”, they will tell you. We have been in that space before and we all know the outcome.

Young players in Limerick have enjoyed some fine success at underage level, but that will have little if any impact on their careers as senior hurlers.

I have said it many times before that such success is over celebrated but no lessons have been learned in this regard. The people that need to show the greatest leadership as far as this is concerned is the Limerick County Board.

They are the people in charge and they need to set the standards that will benefit these players now and in the future.

Next year will be the 45th year since Limerick won the All Ireland senior hurling title. In many ways it’s shameful given the number of quality hurlers the county has produced.

Now not all of the fault lies with the County Board, but they will have to carry a fair bit of the load. They have made some really bad decisions during that time, but worst of all is the fact that they have not learned any lessons and as long as that is the case it looks less likely that Limerick will bring back the Liam McCarthy Cup anytime soon.

The clubs are the people with the power, they have the ability to make change happen, but unfortunately they don’t seem to have the appetite to make it happen. They need to make the County Board answerable for the decisions they take. They need most of all to send one of the strongest club people to County Board meetings.

We also need to see the County Board lead and take back control. We have seen a tendency to off-load to outside committees but that is a abdication of the responsibility they have been given.

We also need to see more openness in relation to the day to day running of the board. This applies particularly in the area of finance where it’s only at year end the bad news is delivered.

Limerick have many different projects on the books but they need to prioritise and focus on what is best for Limerick going forward. I have said it before but I will repeat it again that the project in St Enda’s is WRONG and will not in anyway aid the development of Limerick GAA in the long term.

The major problem Limerick have is that they don’t really have a plan, a roadmap to follow. Now they will refute that but if they do, the facts show otherwise.

Limerick County Board are not in a good position financially and it has been that way for a while. Why was that allowed happen? To people outside the GAA circle in Limerick they believe they have loads of money. That is far from the case.

The reality is Limerick County Board are living on the edge. The board that leaves office on Sunday made little impact during their term and in some cases it has got worse.

One of the biggest challenges facing the new board is how they will deal with the current financial situation and what plans they will put in place to make sure it never happens again.

The Munster Council did make a major financial contribution to the Limerick County Board a couple of years ago but it now appears matters have further declined.

How Limerick County Board does its business needs a major shakeup. They need to be more open and upfront with clubs and the people that support them.

Many people have given up on them a long time ago and it will take a major turn around to get those people back on side.

Leadership, respect and confidence are vital ingredients in making progress in either business or sport and from that stand point Limerick County Board have a fair bit of ground to cover.

At this convention a new Chairman will be elected. John Cregan looks to have the sway on the ground, but things change as convention nears and Liam O’Sullivan with work may pull it back.

To show real leadership, Cregan or O'Sullivan should have a complete independent review of how Limerick County Board does its business.

That sort of clarity is needed if Limerick is to really make progress. If all those who sit around the top table have the good of Limerick GAA at heart, then they should have no difficulty in making sure such an independent report takes place.

I am aware that Croke Park are very close to appointing administrators to run the affairs of some boards and unless Limerick change how they do their business then they will also be in sight.

Wrapping reports in glossy pages might give the impression that all is great but most people know that is not the case.

As mentioned earlier winning some underage titles are great and welcome but we are still no where near catching up with the big teams in hurling.

From a football point of view the graph is worryingly going in the wrong direction.

It’s good to see the convention in East Limerick. Cappamore has a strong and proud tradition in Limerick GAA and like most things they do they will make sure the setting is perfect for the expected big crowd.