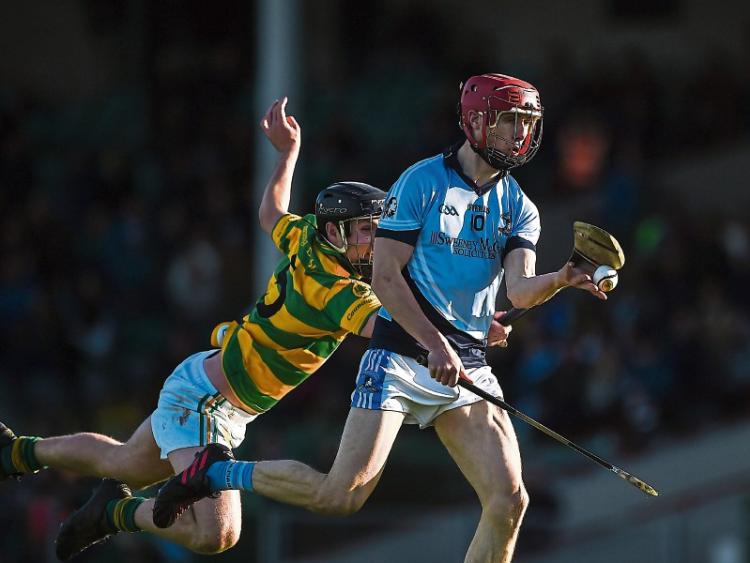 Adrian Breen in action for Na Piarsaigh against Blackrock of Cork

BEFORE I deal with Na Piarsaigh's outstanding victory in last Sundays Munster club final I want to ask a question of the Limerick senior hurling management team.

The question is quite simple. Why and for what reason did they overlook Adrian Breen as part of their panel for next season?

It’s hard to fathom how the best club forward in Limerick and Munster this year was deemed not good enough to join the long list of players that were exclusively announced last week in this paper.

Breen has been in prime form and hasn't stopped collecting man of the match awards since winning the club final in 2015.

He is at the top of his game right now and it seems wrong on many fronts that he has been left out in the cold.

Last Sunday evening I got a flood of calls from people that know their hurling and they were at a loss to explain why Adrian Breen was overlooked. I am not sure what standards the Limerick management are using to pick players but it’s quite clear they need to assess them because they’ve got this one badly wrong.

From a club and Limerick point of view, this latest victory by Na Piarsaigh will rank with any they have won before. They will admit they looked out of the game for long stages and had Ballygunner taken the chances they had in the first half the outcome might have been different.

In winning this game Na Piarsaigh showed many qualities but most of all they showed their experience and how they have learned to graft out a win when it didn’t look like they could.

They had to dig deep because some of their players were not going well. It takes leadership to win big games and in this case it took players like David Breen, Adrian Breen, Ronan Lynch, Kevin Downes and the impressive Niall Buckley to steer the boat home.

Buckley is developing and has had a good year. He was the standout defender for Na Piarsaigh.

As a contest, it only really opened up in the second half. Na Piarsaigh were disjointed in the opening half and they were playing this ‘tippy-tappy’ hurling which was not working. They were nervous and it showed in their hurling. They weren't hitting the ball well and they found it difficult to get their first touch right.

Ballygunner will look back and regret the chances they had, particularly Pauric Mahony who had a really bad day from frees. The Waterford champions were only one point ahead at the break 1-4 to 0-6.

Na Piarsaigh had three points before halftime from a line ball by Ronan Lynch, from play by Peter Casey and Adrian Breen. Those scores proved of great value. It helped settle the team. They hurled with a lack of confidence in that opening thirty minutes.

They did too much running with the ball but one of the main reasons they won this game was that they changed to direct hurling in the second half. Na Piarsaigh have good ball players and fast direct ball will always suit them.

I am sure Shane O’Neill had plenty to say in the dressing room at half time. They were under pressure in defence. Cathal King was pulled out the field from centre back and overall Ballygunner were getting the better of them. Ballygunner out worked Na Piarsaigh but they didn’t get the value of it.

Na Piarsaigh were sluggish in their finishing and as the game wore on they showed the signs of a team that have been on the road for nearly nine weeks in a row.

To their credit, they did start the second half really well. Pauric Mahony, the impressive Peter Hogan and Billy O’Keeffe had early points and it didn’t look good for Na Piarsaigh at that stage.

David Breen was switched to full forward in the second half, Downes went to centre forward. Breen played a key part in turning the game.

His goal after six minutes set the foundation for his teams win. He controlled the game, he made great use of the long ball and brought others into the game.

From this point on Na Piarsaigh were a different team. They started to express themselves. Adrian Breen and Kevin Downes added points and now for the first time in the game Na Piarsaigh went into the lead.

While playing better Na Piarsaigh did have some nervous moments. Padraigh Kennedy has a habit of bringing the ball down from the cross bar and it nearly cost dearly at one point in the game.

Ballygunner were just about hanging in but when Peter Hogan scored a goal it left just one point between the teams with three minutes to play.

It came as a result of poor defending by the Na Piarsaigh backs. The measure of Na Piarsaigh was tested and once more it was Adrian Breen who delivered.

Both he and Conor Boylan pulled on a ball but it was Breen who got the vital touch.

That score sealed the deal. Adrian Breen finished with 1-5 and again picked up man of the match.

Before games end his brother David added another great goal. He won it on the wing and had to carve his way at an angle before blasting the ball passed Stephen O’Keeffe.

David Breen, for a man that commutes from London, had a great game and used all of his experience in this contest.

The manner of this win will further strengthen Na Piarsaigh and right now they are on course for a place in the All Ireland final on March 17th.

I think it would have come as a shock to many people last week that Joe O’Connor, the Strength and Conditioning coach to the Limerick senior hurlers, has also joined forces with the Kerry senior footballers.

Limerick will be under pressure to deliver some real progress in 2018 and for that reason it seems a bit strange that O’Connor can float between both camps.

O’Connor's ability is well known, but I am not so sure this would be allowed in Cork, Tipperary, Kilkenny or Galway.

His business model is working and he is fully entitled to seek other work but in this regard the Limerick County Board and the three man committee must also have the right to question his role with Limerick.

Maybe they think it’s ok to work with both teams and that it's possible to do work in both camps but I am not so sure of it.

For it to happen the Management of the team, the three man committee and the County Board must have agreed it but time will only tell if this new model works.

Jerry Wallace is back with the Limerick hurling academy. The Cork man, it appears, will have total charge and it will be interesting to see what changes he will make.

Over the past couple of years the academy has lost its edge and it will take a lot of work to turn it around.

Wallace had a serious ‘go’ at the County Board a couple of years ago and it’s a surprise to see him back with the underage academy so soon.