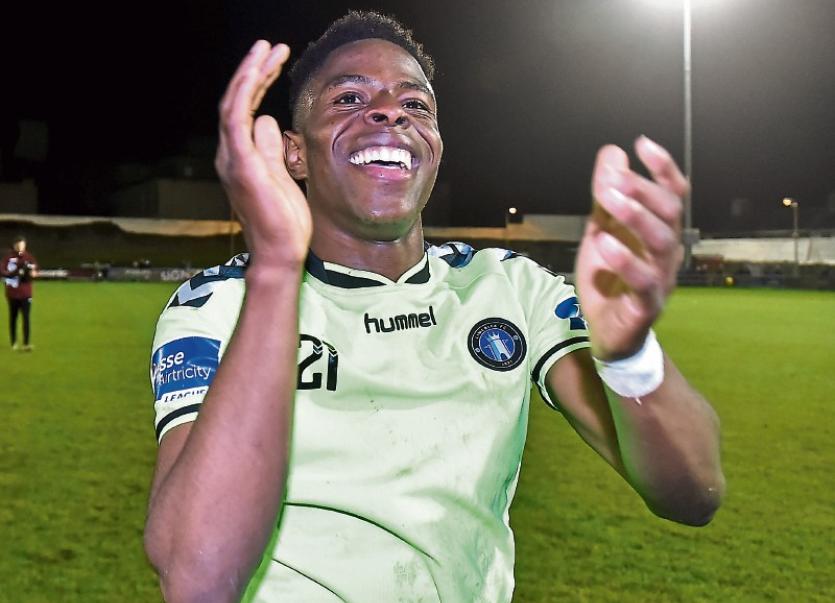 LIMERICK FC winger Chiedozie Ogbene has been shortlisted for the final SSE Airtricity/SWAI Player of the Month award for the 2017 season.

This is the third time this season that Ogbene has been nominated for the prestigious monthly award and the second month in succession he has been shortlisted.

Twenty year-old Ogbene has enjoyed an excellent debut season at Limerick since joining from Cork City. Ogbene chipped in with eight Premier Division goals as the Blues retained their SSE Airtricity League Premier Division status for next season.

Ogbene’s eye-catching displays this season hasn’t gone un-noticed with a number of cross-channel clubs said to be interesting in securing his signature.

St. Patrick's Athletic have had both Conan Byrne and Billy Dennehy nominated after they secured safety in the Premier Division in the final game of the season.

Bohemians defender Rob Cornwall makes up the six nominations for the month of October, the final SSE Airtricity/SWAI Player of the Month award of the 2017 season.

The winner will be announced next week.

The nominations in full:

Conan Byrne (St Patrick’s Athletic): Named the club’s player of the year and continued to lead by example in the final month.

Billy Dennehy (St Patrick’s Athletic): Contributed key goals and assists, including man of the match display against Cork and equaliser in Galway, as the Saints avoided relegation.

Jamie McGrath (Dundalk): Key figure for the Lilywhites and made more of an impact in attacking third.