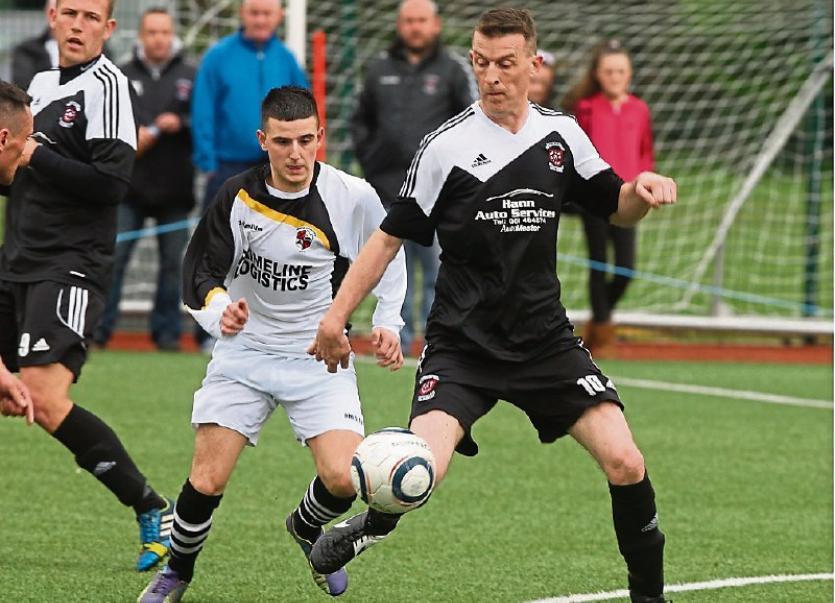 If I asked the local junior football public about top goal scorers in the premier league I think Shane Clarke would be the name on most tongues and I suppose bearing in mind his goal scoring haul in recent seasons that might be understandable.

But this week I caught up with another Janesboro legend, one of the all time top scorers in local Junior football. A player who’s career has spanned four decades and who has hit the net over 400 times in the Premier division, yes that is not a misprint, 400 times.

Conor Lynch has graced junior football's top flight for over 26 years, A truly amazing achievement when you consider that all but one season with Aisling and one other with Fairview, have been spent in the black and white of Janesboro FC.

Always a gentleman both on and off the pitch, anyone who played with or against Conor will admit that hi’s dedication, sportsmanship and attitude to the game is always first class.

Conor made he’s debut in 1989 during an era where scoring twenty goals a season was a fantastic achievement for any striker and I am sure all will agree was a time when the standard of Junior football was probably at its peak.

Ten years after making he’s debut Conor notched up he’s biggest season tally of 40 goals and when we discussed some of the centre backs of that era it really put that record into context.

Conor named Joe Roche, Declan Hyde, Derek Whyte and Billy Tynan as he’s most difficult opponents of that period. All players who were in their prime and at the top of their game at that point in their careers.

Having experienced many changes in the local game Conor commented that “90% of the games in the 1990s and early 2000s were all close games, a lot won by the odd goal.

“There were no easy games. Today there seems to be too many one sided games played in the Premier League with a big gap between the top teams and teams in the bottom half of the table, obviously the pitches and facilities are now a lot better as you’d expect and while the training techniques have also improved the standard of football overall cannot be compared to those early years” admits Lynch.

In a trophy laden career which boasts three Premier league titles, a Munster junior cup, five Lawson cups, a Saxon Cup as well as three Touhy Cups and a Simmington Cup, (which was the local area final of the FAI cup in a time where only one team came out of Limerick to represent the league in the out of town stages of the national showpiece competition) Conor still remembers the 2001 season as one that the FAI cup got away from him.

“I had 38 goals scored that season before tearing my cruciate knee ligaments” laments Lynch. The year his beloved Janesboro got to the semi final of the FAI cup, losing to Ballymun, while their ace marksman could only watch from the stands.

The Oscar Traynor trophy is the only other medal that Conor is missing from his very impressive collection, a competition that he has both managed and played in for the local league.

“I feel like the competition doesn’t get the respect it deserves. I have witnessed other leagues kitted out in the best of gear to go and represent their county, this psychologically is a massive advantage. We have the potential to win this competition every year and if successful could give more local lads a chance to represent their country in Junior International Football”

“There needs to be a proper budget set aside annually to support the team both on and off the pitch with incentives in place for players to go out and represent our league. I feel that the players would buy into it fully if the management were given the proper resources to run the team and lift the prestige attached to the competition” Lynch continued.

“ There is no substitute for hard work. I was lucky after my ACL tear that I managed to stay near enough injury free and when I got into my mid 30s I worked very hard on my core strength and increased my training from the regular two nights a week to four. I discovered Fit100 on the Ballysimon road and complete two sessions a week with them aswell as two club sessions with Janesboro FC and its doing that bit extra which really has been the difference for me. I am very proud of the fact that I won a couple of Lawsons, a league and a Munster Junior cup after hitting my 40s in an era that still boasted opponents of the calibre of Pa Mullins, Colm Enright and Paddy Purcell” th e evergreen Lynch continued.

As the curtain slowly comes down on one of the most glittering Junior football careers ever, I wondered was managing a junior football club something that Conor would consider and what in his opinion required to be a successful manager at this level

“I would like to get involved at some point, so yes it does interest me. In Junior football I believe you need to stick to one formation, It’s 4-4-2 for me with very subtle changes to deal with different opposition. One can’t just change formations and expect without requisite coaching for a player to understand his role. Ultimately the squad a manager assembles will determine hes success, it has to be a squad that has a desire to train hard and collectively get behind the managers beliefs”.